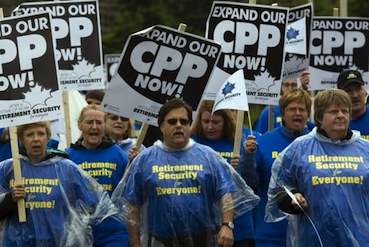 Canada’s federal, provincial and territorial finance ministers are set to meet again in June and CPP enhancement, deferred since June 2010 and again at their December 2012 meeting, should be on the agenda. CARP has sent an open letter to the Ministers.

CARP members in the weekend CARP Poll™ demonstrated their impatience with government inaction on pension reform to date. CARP members are reiterating their call for enhancing the CPP as the best way to actually help people save adequately for their own retirement. As before, CARP members are ready to make action on CPP enhancement a condition of their vote – for the benefit of future generations.

“While MPs, who have no pension worries, squabble about the travel perks of senators, who have no income worries either, ordinary older Canadians are worried about having enough to live on in retirement. CARP members reject the PRPPs and the government’s excuses and despite five years of delay and prevarication, are more convinced than ever that immediate action is needed and will make their demand for pension reform clear in the ballot box”, said Susan Eng, VP Advocacy for CARP.

“CARP members know that CPP changes will only help future generations, not themselves, and see CPP playing a critical role in preventing poverty among seniors – the whole point of a nation’s pension system. So even if the impact will not be felt for decades, they know that governments need to act now”, added Eng.

Since the poll’s release Friday, over 1,700 CARP members responded with precise advice:

Pension experts, think tanks and even a bank CEO have said that CPP enhancement is the best way to help people save adequately but the federal government and some provinces have clung to the PRPPs as the sole solution to under-saving and growing retirement insecurity. [Please see citations at end of release]

CARP members reject the government’s PRPPs as an adequate solution on its own. CPP enhancement was always seen as a necessary adjunct if not the only solution to Canada’s retirement insecurity.

Significantly, the new Quebec government’s November 2012 budget declared its support for CPP enhancement which would have broken the log-jam and allowed CPP reform to proceed. This caused Finance Minister Flaherty to declare that he wanted unanimity before proceeding although his vote was the only one then [and now] legally required.

In June 2010, the finance ministers finally acknowledged that Canadians were not saving enough for their own retirement and that governments had a role to play. They proffered the Pooled Registered Pension Plans and committed to considering a “modest” CPP enhancement.

Despite repeated calls for action on CPP enhancement, with at least one province making CPP enhancement a pre-condition of its enacting provincial PRPP legislation, notably Ontario’s former finance minister, Dwight Duncan, no action has been taken to increase the CPP coverage or benefits, even “modestly”.

CARP has called for a universal pension plan [UPP] modeled on the CPP but not necessarily made part of the CPP. However, its essential elements – employer contributions, payroll deductions, large pooled risk fund, professional management and target/defined benefits – are the elements of CPP enhancement that are supported by CARP members and pension experts alike. When only PRPPs were on offer, CARP members saw this as an acknowledgement of the need to address retirement insecurity but always relied on even a modest enhancement of the CPP in order to materially improve the pension landscape.

Douglas D. Peters, former chief economist, TD Bank
“It is clear that increasing CPP contributions is by far the best way to improve pensions for Canadians. One would hope that all the finance ministers in Canada would heed this call for an improved Canada Pension Plan.” http://www.thestar.com/opinion/editorialopinion/2010/12/22/public_option_best_strategy_to_buttress_pension_system.htmlToronto Star (Op Ed), “Public option best strategy to buttress pension system,” December 22, 2010

Dwight Duncan, Ontario Finance Minister
“I believe we should seriously consider building on the strengths of the CPP through a phased-in, moderate increase to retirement and survivor benefits.” http://www.fin.gov.on.ca/en/consultations/pension/Letter to Canada’s Finance Ministers, June 10, 2010

Dr. Keith Horner – Institute for Research on Public Policy
“When we take the various plan features and effects into account, it appears that the greatest benefits to participants and to the economy would come from the introduction of a national DB plan, such as an enrichment of the CPP/QPP, provided that the scale of the new plan leaves most participants with room for individual choice in the level and timing of their saving.” http://www.irpp.org/pubs/IRPPstudy/IRPP_Study_no18.pdf (page 29) A New Pension Plan for Canadians: Assessing the Options, Institute for Research on Public Policy No. 18, July, 2011