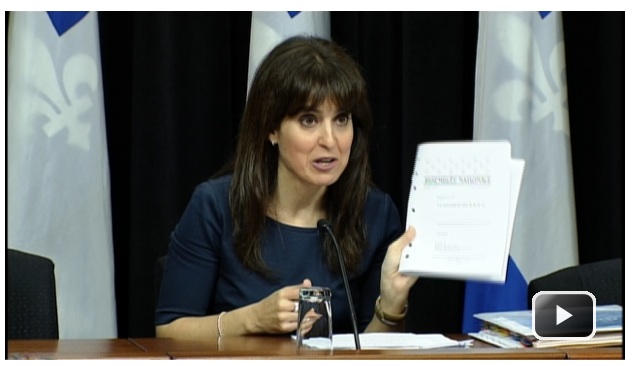 Hivon said she was honoured to introduce the bill, saying “this legislation is intended for people at the end of their life to die with autonomy and dignity.

This article was published by CBC News on June 12th, 2013.  To see this article and other related articles on CBC News website, please click here

After Hivon introduced the bill at the national assembly, Quebec government house leader Stéphane Bédard underlined the importance of a non-partisan approach to the topic of end of life.

“Our desire is quite simple. We want to make the debate something all of society can engage in. A non-partisan issue,” he said.

“I believe we are capable of holding this debate at this time. Society is ready for it.”

At a news conference after the bill was tabled, Hivon spoke at length about its mechanics.

She explained Quebec’s bill on medical aid to die is different from what is being done in the four U.S. states that have legalized assisted suicide.

People in Vermont, Oregon, Washington and Montana can have a doctor write a prescription for a lethal dose of medication. They can fill the prescription and take the medication at their own discretion.

If Quebec’s proposed legislation gets adopted in the fall session of the national assembly, a doctor who receives the repeated consent of a patient could administer medication to cause death.

Hivon said this differs from palliative sedation, which is already legal in Quebec — patients on the cusp of death can be put into a medically induced coma, and have equipment such as a feeding tube and respirator removed.

Hivon explained that the reason for going with medical aid to die and not assisted suicide is one of compassion, saying the language in the bill is to prevent leaving a terminally ill person to die alone.

The bill is a response to some Quebecers’ desire to die quickly.

“Most people want palliative care, but for the exceptional cases, we need to have an answer.”

On CBC’s Daybreak Montreal on Wednesday morning, two doctors came out on each side of the debate — symbolic of the split in the province.

Boisvert pointed to the safeguards proposed in the Ménard commission report on end-of-life policies, including repeated requests and, if necessary, psychiatric consultations.

“It is quite clear when palliative care fails,” he said.

“When the team agrees at the patient’s request that it’s time for terminal sedation because nothing else works, you have all the conditions to proceed if it is the patient’s wish with physician-assisted dying.”

But Bacon was careful to make a distinction between medical aid to die, euthanasia and what Quebec doctors call palliative sedation, calling euthanasia the active killing of a human being by their doctor.

“The intention in an act of euthanasia is to stop the vital functions prematurely,” Bacon said.

“As human beings, we know that if you commit an act to make a person to stop breathing, for the pulse to stop, you’ve killed at person. To feel easy about taking a life is a scary situation for anyone to be in,” he said.

Boisvert had problems with Bacon’s definitions.

“The definition of killing is very clear. It implies an act of taking the life against the will of. That is the very meaning of killing,” he said.

“To use that word is a psychologically, emotionally loaded term.”