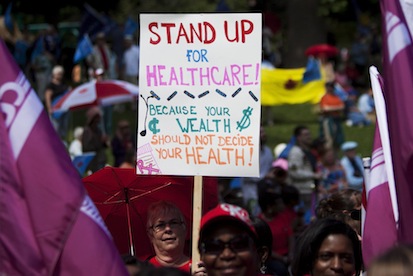 July 26th, 2013: The Council of the Federation isn’t scheduled to talk about health care until Friday, but as many as 2,000 protesters rallied Thursday to call for it to be prioritized in Niagara-on-the-Lake.

Organizers had invited all 13 premiers to come out and speak, and were particularly hopefully that Ontario Premier Kathleen Wynne would accept the invitation. But by the time the leaders broke for lunch, about an hour behind schedule, the rally had largely wrapped up.

Speaking to the media, Wynne expressed respect for the people outside, pushing leaders to do the right thing. She added she is looking forward to hearing from the Health Care Innovation Working Group, led by premiers Robert Ghiz and Brad Wall, on Friday.

The protest peaked shortly before noon, when participants marched to the Queen’s Landing Hotel led by a trojan horse, which was intended to symbolize the Canada-EU trade deal “smuggling privatization into health care.”

Labour groups, medical professionals and community health-care coalitions arrived by the busload just down the street from where the premiers are meeting, carrying banners that read “Healthcare is in critical condition” and “Stop Harper.”

While they were trying to catch the attention of the premiers, the object of their wrath is the prime minister.

Natalie Mehra, the director of the Ontario Health Coalition, said their goal is to raise public awareness about the current health accord expiring, and put pressure on Stephen Harper to negotiate a new one.

“I believe that if Canadians knew what was going on, they would protest en masse,” Mehra said.

Federal NDP health critic Libby Davies also added her voice to the cause, attending the rally and speaking at a press conference with Canadian Doctors for Medicare.

“I only wish that there were more federal representatives here today,” Davies said. “The federal government has so retreated from health care, which is such a strong element of the cohesion of our country.”