The Middle-Aged Guide to Growing Up: Mind the Gap - CARP
Join Donate Sign In 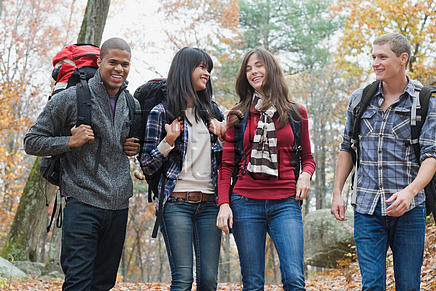 I’m a Boomer, old enough to remember the passage of the Voting Rights Act in the US and, unfortunately, young enough to see it struck down. This column’s not about politics, though, it’s about work, and the jobs we do when we’re young.

I did a lot of crappy jobs when I was younger. In fact my first job, still in high school, was gravedigger. The only grave I dug was the gravedigger’s. I didn’t have  backhoe, I did it with a shovel, over a hundred cubic feet of dirt and gravel. It took days.

Before I turned 30, I’d been a nurseryman, a toxic chemical painter in a beer fridge factory, a timber cruiser (a fascinating job where you walk in straight lines through untracked forest and estimate the amount of lumber it contains), a camp counselor and sailing instructor, a prep chef in a co-op restaurant, an itinerant touring Shakespearean actor, the director of a summer stock theatre in Quebec (the last two weren’t crappy jobs, they were ‘adventures’), a commissioned shill for undeveloped real estate in the Texas desert (which I wish I’d bought some of) and finally, a bit player in the longest running Agatha Christie mystery in the world.

I was never a waiter, or a taxi driver, or a tree-planter. I managed to avoid those occupations for slightly more interesting and outdoor pursuits. But I did a lot of menial and semi-skilled work that didn’t pay very well, wasn’t aligned with anything I planned to do with my life and wasn’t particularly challenging. That’s OK, those jobs are what young people do, or so I thought. Building character, getting experience, confronting the unexpected and moving outside your comfort zone.

People in their twenties tell me this is no longer possible. If you don’t have your career path set by your third year of college, if you don’t have that all-important internship lined up for the summer in your field, if you’re not constantly networking and focusing all your activities on your planned line of life’s work, you’ve lost.

That’s so sad. Thousands of Canadian kids who won’t howl at the moon around campfires fuelled with beer in the remote BC bush, who won’t get in terrible girl trouble at summer camp, won’t drink in taverns after work with grizzled workforce veterans who know a thing or two about life. They’ll be missing out on some of the most important building blocks of a well-rounded life.

I took theatre in University. I’ve found that training; presentation, memory, organization, expression, more useful in my business life than any of the professional courses I’ve taken. These are the skills they don’t teach in MBA courses, and they’re the experiences that young people should have available to draw on from the memory bank for those predicaments when what you learned in school won’t help you.

In other countries, most students are expected to take a ‘gap’ year between secondary school and university – a year where they can get real world experience and, especially for Australians, leave the home continent and see the world. Almost every Australian you meet has worked as a bartender at some point, in some foreign land.

The gap year appears to have become a non-essential frill in our modern career-oriented education system. And that means there’s also a gap in graduates’ experiences. And in their lives.