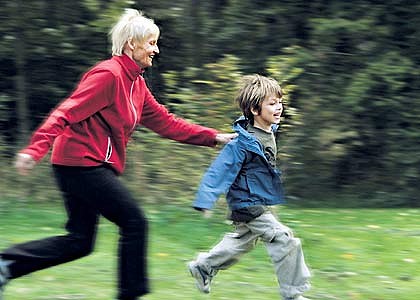 Most of us assume that aging equals illness.

What if we could cure age-related disease?

What if we could be older, true, but be as healthy as the average young adult? The assumption – aging equals illness – shows itself in how we respond to the question “Do you want to live to be 120?” Most of us don’t. The Pew Foundation and CARP asked this exact question. The majority of us said we wouldn’t want to live that long, even if people had access to “medical treatments that slow the aging process and allow them to live decades longer”.

But look carefully at what the question implies.

Most of us – having close friends and relatives with Alzheimer’s disease or who live in a nursing home – immediately translate the question from “do you want to live to be 120” into “would you be willing to live in a nursing home, unable to care for yourself, for another 30-40 years?” We make this translation unconsciously, but quite naturally: after all, that’s what it means to be that old, doesn’t it? When look at the question with this assumption in our minds, why would we want to live to be 120? Not surprisingly, most of us wouldn’t. Why would you – or anyone – want to be kept alive even longer, unable to feed yourself, unable to recognize your own children, and unable to enjoy life around you? Not surprisingly, most of us would prefer an easier fate, a sudden illness for example, rather than submitting to decades of nursing care.

But let’s change our question a bit.

And yet perhaps it’s not so odd a question after all. As it turns out, a great deal of research shows that we may soon do exactly that. We can now reverse aging in human cells and in human tissues in the laboratory and at least one Canadian biotech firm is about to take the same approach in curing age-related diseases. They may well change everything you think you know about aging and disease. Older yes, but why not healthier as well?

Or try an even better version of the question.

It is if we can cure age-related disease, and we may soon do precisely that.

Some of us discount the question for other reasons, feeling it would be wrong to “grasp after youth”, yet we chose health every day, with nary a pause for thought. We even chose the mere appearance of health, even when it does nothing to improve our health. It’s not surprising that we should take antibiotics for pneumonia and replace our aging knee joints when osteoarthritis prevents our walking without pain, but we also dye our hair and pay a truly astonishing amount for Botox, when neither of these provides anything but an illusion.

Soon, however, we may be able to prevent and cure Alzheimer’s disease and regrow our own natural knee joints, so that they work as well as they did when we were young adults Would you want to play tennis at age 90 if your knees and your heart were healthy?

Until now, when it came to aging, the medical community has also tended to “answer the wrong question”. We still think of aging as inevitable and age-related disease as incurable. But the outcome is that we often discount disease in our elderly patients, treating them often as not only incurable, but invisible. Few of us would be callous enough to ignore the suffering of children, yet some of us have quietly ignored suffering in the elderly, perhaps not because we don’t care, but because we feel impotent in the face what we thought of as inevitable disease.

Research now shows that this view is naïve. Aging is not inevitable nor is age-related disease incurable. We need to take the results we have in cells and animal studies and go further: we need to eradicate the diseases of aging. Suffering is not inevitable, nor can we afford to ignore the elderly. Over the past century, we worked hard – and worked together – to cure polio and other common diseases of the young. Compassion for the young is common; an equal compassion for the old should be no less equally common. It is time to find out what compassion and hard work can accomplish.

It is time to save both our health and our lives.

Michael Fossel, MD, PhD, MA, FACEP, is the Chief Medical Officer at Double Helix Corp. as well as a former executive director of the American Aging Association, he has lectured at the NIH, the Smithsonian Institute, and universities, institutes, and conferences globally. He founded the Journal of Anti-Aging Medicine (now Rejuvenation Research) and written more than four dozen articles on aging and ethics in the Journal of the American Medical Association, In Vivo, and other academic journals.   He has appeared on Good Morning America, ABC 20/20, NBC Extra, Fox Network, CNN, the BBC, the Discovery Channel, and regularly on NPR.