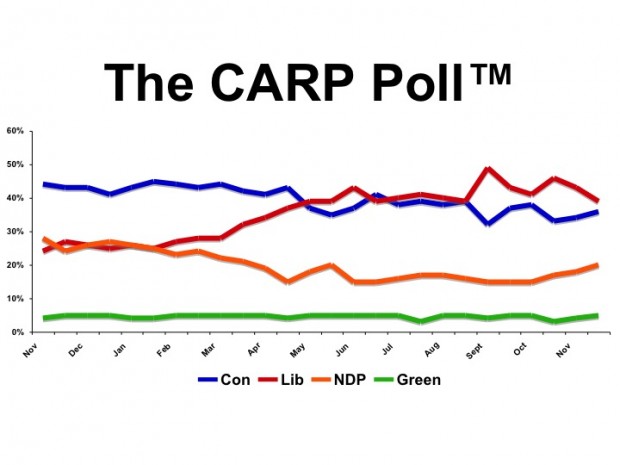 December 6, 2013: CARP members are disproportionately likely to have public sector DB pension plans, and do not wish to give up any of their retirement benefits. They believe strongly that all Canadians should have decent pensions and that current retirement benefits must be protected.

There is universal agreement Canadians are owed a decent pension for a dignified retirement, and the most important feature of DB plans are seen to be the guaranteed payout, followed by the cost-of-living adjustment. Those that are underfunded are seen to be badly managed, or the products of an aging population and shrinking workforce. Employers who do not pay up deficits are also seen to be the cause of this.

There is agreement it is better to gradually increase contributions for underfunded plans, rather than cut benefits, but combining plans for greater scale and eliminating non-core benefits are also seen to be courses of action. When given a choice, most would opt for increased contributions over ending early retirement or cutting benefits as a way of keeping a plan healthy. Once again, very few would accept seeing cost-of-living increases eliminated. This idea runs throughout this report – that it is better to increase contributions than to cut benefits, especially the cost-of-living increase.

The plurality would like to see current DB plans sustained, while many would like to see them expanded. Few wish to maintain the status quo. Members assume about 60% of payouts are from investment income, and when they find out the figure is more like 80%, they say this attests to sound, professional management, although some recognize the risk involved. Members see the opposition to CPP expansion from employers’ groups as a perception that contributions are a tax, not deferred income, an ideological bias against pensions and a lack of care for employees.

The majority say they will deny their vote to a politician who argues for turning public sector DB plan into DC plans, and this is approximately the proportion who will vote against the current government anyway.

The Liberals continue to lead the Conservatives in voting preference, while the gap is narrowing, and the NDP is in third place.