Need to Know: Your Essential Guide to the Ontario Election - CARP
Join Donate Sign In 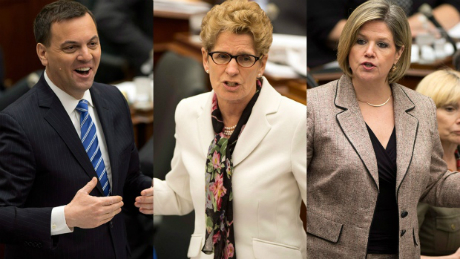 The June 12, 2014 Ontario election is an opportunity for voters to choose between competing visions of where Ontario stands and where it should be heading. For older Ontarians, there’s a lot on offer. All three major parties are campaigning for senior votes on platforms that include proposals for improving comprehensive chronic care, homecare access standards, a provincial pension plan, and affordable hydro. The platforms are a real indication that political parties are paying attention to seniors’ issues and CARP advocacy.

CARP has a long record of advocacy on pension and retirement issues. More than five years ago, CARP began pushing for a universal supplementary pension plan modeled on the CPP to provide predictable income in retirement. CARP’s UPP would work like the CPP, allowing Canadians to safely supplement retirement savings through a large national plan, independent of government or single employers, with mandatory enrollment that would use the existing payroll deduction mechanism, and professional management, with a focus entirely on optimal performance. CARP has also been pushing for a modest CPP enhancement.

Retirement and pensions issues during this election campaign offer voters a real divergence of party plans. The PCs, should they form government, would move ahead with implementing Pooled Registered Pension Plans in Ontario PRPPs, in much the same form as offered by the federal government. While it’s not in their official platform, Mr. Hudak has also said that his party is against CPP enhancement and the Liberal proposal for an Ontario Retirement Pension Plan (ORPP). The PCs would also aim to reduce public sector defined benefit pension plans to be more in line with private sector plans, which typically offer defined contribution plans.

The NDP also say they would reject the ORPP proposed by the Liberal Party. According party leader Andrea Horwath, the NDP would instead continue to push the federal and other provincial governments for CPP enhancement.

The Liberals plan on pensions was made clear when the budget dropped in May. Their central plank on the issue, and arguably for the entire campaign, is the ORPP. The ORPP would work much like the CPP with mandatory contributions shared equally by employer and employee and it would provide an additional income replacement of 15% of a person’s earning up to $90,000 income. While it would be Ontario based, the Liberals have said that other provinces could join and that the plan could ultimately be integrated with the CPP, should the current or a future federal government change course on CPP enhancement.

Since 2012, CARP has been advocating for a One Patient model of healthcare that would transform our current healthcare system into a single seamless continuum of care that gives patients clear and direct access to care from first diagnosis or acute episode, through acute care, home and community based long term care, through to end of life needs.

As the population ages, people will need more and better chronic care provided in the home or community setting. In addition to primary care, providing comprehensive, patient focused care will requires access to timely and affordable homecare and support for informal caregivers.

CARP’s One Patient model seems to have taken roots among the political parties. All three parties are campaigning in part on new approaches to chronic healthcare.

The PCs are running on promises for “a new focus on chronic care.” The key planks propose creating “chronic care centres in which all of the doctors and nurses caring for people with serious chronic conditions work together to develop comprehensive care plans for those patients”, according to the platform. The PCs propose to create a healthcare navigator “for patients with the highest needs […] to ensure they get the care they need when they need it, and that all of their sources of care work together.”

The NDP propose to open 50 new, 24-hour family health clinics “with the capacity to serve at least 250,000 people, cutting the number of Ontarians without access to primary care by 25%,” according to the platform. The New Democrats would also invest in 1,400 new long-term care beds, which they claim would eliminate the waitlist entirely for patients with the most urgent need.

The Liberals say they would create 36 more Health Links, increasing the provincial total to 90. According to the platform, “health Links help those who have multiple, complex conditions, and provide a personal care coordinator for each patient, so that the burden of managing appointments and sharing information is reduced.” They also promise to develop a palliative and end-of-life care strategy, committing to funding 20 more hospices, almost doubling the number of people who would have access to end of life care.

All three parties are staking positions on homecare. The PCs would expand homecare and long term care availability and allow seniors to choose between government provided services or a sort of voucher system for privately delivered care. The NDP are promising to eliminate wait times for homecare with a five day home care guarantee. The Liberals would invest $750 million in home and community care over the next three years, including more than $270 million in the first year, to provide better care and bring down wait times.

While the PC platform is silent on the issue of caregivers, the NDP are taking a significant step in proposing to support informal caregivers with a new $1,275 per year Caregiver Tax Credit. Combined with the federal caregiver tax credit, caregivers in Ontario would be able to qualify for up to $1,500 per year. But unlike the federal tax credit, the NDP offering would be fully refundable and is in addition to supports available through other programs.

The Liberals are proposing to build on their recent success in passing Bill 21, which offers job protection for informal care providers who need time off to care for ill family, by offering respite and training supports for caregivers.

Home energy costs have risen steadily over the past decade, making it difficult for many seniors on low, fixed incomes to keep up with the rising costs of living. In a recent poll, CARP members say they spent on average $270 per month on energy costs this past winter. Almost 20% of members admit that they have to make trade-offs between paying energy bills and paying for other necessities.

CARP has called on the Ontario government to provide relief for home energy costs for Ontarians who have been hit particularly hard by the combination of the new Harmonized Sales Tax, Time of Use Meters, rising home energy costs, and rising property taxes. CARP was instrumental in advocating for the 2010 Energy and Property tax credit for older Ontarians, which gave $70 million of additional property tax and energy tax credits to over 740,000 Ontarians.

Energy costs are a big issue in Ontario and it shouldn’t be a surprise that each of the parties is campaigning on making energy more affordable.

The PCs are hoping that voters will go for their plan, which includes ending subsidies for alternative clean energy, reducing energy sector bureaucracy, and importing hydro from Quebec and other jurisdictions.

The NDP are also taking aim at hydro bureaucracy and capping salaries in the public energy sector. At the pocket-book level, the NDP would remove the provincial portion of HST from home hydro bills, saving households approximately $120 a year, get rid of the debt retirement charge, worth $70 per year.

The Liberals have a harder case to make, since they were the government for the past decade while costs rose. But their platform promises to eliminate the debt retirement charge for residential electricity users by the end of 2015, saving the households an average of $70 a year.

Retirement income, chronic care, homecare, supports for caregivers and energy affordability form the bulk of the parties’ campaigns. All three parties are actively vying for older voters’ attention, and that’s not an accident.

Older voters show up on Election Day in much greater numbers than other demographics. Older voters – and CARP members in particular – are always well informed on the issues. And CARP works hard during and between election cycles to keep your issues in front of all governments and opposition parties.

With all three parties speaking to seniors issues, voters will have to choose the party they think will form the best government and will work the hardest to fulfill campaign promises.

To read each of the party platforms, follow these links:Progressive Conservatives, NDP, Liberals

To help facilitate the process of weeding through all of the policy platforms we’ve isolated the parts that apply to older voters and organized them according to CARP’s issues rather than by party. This handy brief will allow you to see what each of the parties is offering for all of our priority areas. To read the CARP Issues Ontario Election Briefer, please click here.

we have isolated the parts of each party platform that speak directly to older voters. All the issues included here are taken directly from published campaign platforms and may not reflect issues, statements, and documents released in the media or on the campaign trail.

We’ve organized the platforms by CARP’s main priorities rather than by party, to allow for easier comparison, starting with pension issues, followed by healthcare, home care, caregiving and energy costs. And we have only included issues that are specifically targeted at older Canadians.