Ontario Drives Ahead with ORPP: Refresher and Update - CARP
Join Donate Sign In 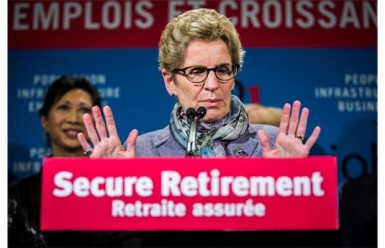 CARP members will no doubt recall that the Ontario Retirement Pension Plan (ORPP) was first proposed in the minority Liberal Government’s 2014 Budget tabled May 1st, 2014. The budget was not adopted in May because the Opposition parties triggered an election. On June 12th 2014, Kathleen Wynne’s Liberals were re-elected with a majority government and two days later (June 14th) they re-introduced the same provincial budget. Premier Wynne appointed Mitzie Hunter (Scarborough – Guildwood) as Associate Minister of Finance for the ORPP.

In late June, the Premier convened a roundtable on pensions with members of the government’s Technical Advisory Group on Retirement Security along with the Minister of Finance and the new Associate Minister of Finance OPRR. The roundtable focused on discussing the best way to forge ahead with the implementation of the ORPP. The government also heard from stakeholders, including CARP.

It is expected that ORPP enrollment would occur in stages starting in 2017 and beginning with the largest employers. Contribution rates will be phased in over two years. For anyone who would like a refresher on the mechanics of the proposed ORPP, they are as follows:

What will this mean in dollars and cents?

What have CARP members said about the ORPP?