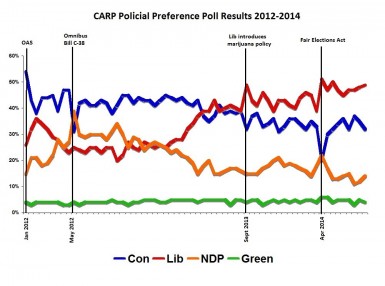 August 12, 2014: CARP members think the most useful outcome of the upcoming First Ministers conference in PEI would be the kind of national standards for health care previously imposed by the national Health Care Accord, coupled with a comprehensive national seniors health care strategy that includes dementia care, home care and end-of-life issues.

CARP members see a role for the federal government, not only in setting national health care standards, but in overall management, goal-setting, and funding of the health care file, and regret the fact the government has stepped away from the table.

Members are not confident the provinces can work together without the federal government to achieve, among other things, a national seniors health care strategy, national standards for health care, a national home care strategy, a comprehensive approach to dementia and to end-of-life issues. They do not think the arrangement of the last two years, where the federal government has provided capped funding but avoided any management role in health care, has worked well enough.

More funding for home care is seen as the best solution to the problem of seniors filling acute care beds, followed by better coordination between hospitals and home care agencies. Most members say home care in their provinces hasn’t been improving. Members see creating both a national pharmacare plan and a national end-of-life care capability as extremely important.

One half of members will vote Liberal if the election were held today, while one third would vote Conservative. One eighth will vote NDP. The Liberals have gained vote share recently at the expense of the Conservatives.

As a result of this poll, CARP sent a joint letter with the CMA (Canadian Medical Association) to the chairs of the Health Care Innovation Working Group to encourage the Premiers to lead the establishment of a national seniors’ strategy that fully addresses the needs and expectations of an aging population. CARP and CMA will also be co-hosting a seniors care roundtable in Charlottetown on Aug. 28, 2014 in parallel to the Council of the Federation meeting. See full news release and joint letter.