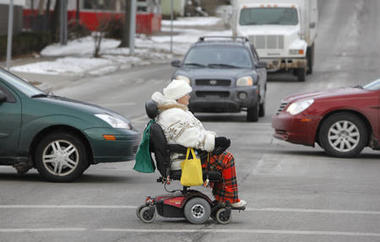 Amidst the growing chorus of complaints asserting that Canada Post’s elimination of door-to-door service leaves Canadians with mobility hindrances in an untenable position, the postal service recently announced that it has created a compromise.

The solution they have proposed would require Canadians with disabilities that prevent them from accessing community mailboxes to answer questionnaires and questions about their medical history, consider giving “a friend” their mailbox key as well as provide a doctor’s note that can attest to their disability or illness.

Canada Post has said that some of the solutions they would consider include adjusting the height of the person’s mailbox, providing them with an extra key and in extreme solutions when all else fails they said they would consider home delivery (once a week and likely only during the winter months).  The following article contains reactions by CARP as well as the Canadian Medical Association, it was published by London Community News and other local papers on August 14th, 2014.  To go directly to the article on the London Community News site, click here:

This demonstrates a complete lack of awareness of the challenges facing health care professionals and patients seeking access to care, said Dr. Louis Hugo Francescutti, president of the Canadian Medical Association, in a statement.

The organization that represents the country’s 80,000 doctors says it was not consulted about Canada Posts plan.

Physicians are already burdened with administrative process that comes at the expense of face time with patients, he said. Furthermore, it appears little consideration has been given to the confidentiality and privacy of patient information.

Over the next five years, Canada Post will phase out door-to-door home delivery, switching customers to community mailboxes.

Advocates for seniors and disabled groups immediately complained about the plan, saying it would be difficult for some Canadians to make their way to a central mail area, especially in winter.

Canada Post, which begins the switch over this fall with 100,000 addresses including parts of Oakville, said it is prepared to offer accommodation or assistance to ensure everyone has access to their mail.

It then asked anyone who believes they will have difficulty to reach a community mailbox to inform officials, sending out questionnaires.

Spokesman Jon Hamilton said every case will be considered on an individual basis, which could mean adjusting the height of a compartment, adding a sliding tray to make it easier to get mail or possibly giving extra keys for a caregiver or friend.

In the event that wont work, Hamilton said Canada Post would consider collecting the mail once a week and delivering it to the door, but it would require some sort of medical proof.

It will only be for certain cases, he said, adding it consulted with dozens of organizations for advice.

The form could be signed by others besides a medical doctor including a physiotherapist, psychologist or optometrist.

Its pretty commonplace. Were not breaking new ground here. Were following the lead of a lot of organizations, public and private, that have good healthy accommodation programs in place, Hamilton said.

That seems to be the best way we can offer the program, and ensure were really helping those who need it, he said.

However, some groups are concerned about the disclosing of private medical information.

I think we should be insulted by the measures they are considering, said Susan Eng, vice-president for advocacy at CARP, which lobbies on behalf of retirees.

Why do I have to review my medical condition in order to retain mail delivery? What are they going to do? Single me out by coming to my door? she said.

Eng argued the move would be a waste of health care resources.

The premise is idiotic, she said, noting it follows Canada Post CEO Deepak Chopra’s comments to a House of Commons committee suggesting the community mailbox changes would be beneficial because seniors can get more exercise.

Disability rights advocate David Lepofsky said Canada Post previously provided a service, now its being withdrawn, and its up to individuals to prove a need.

On an administrative level it would be crazy. Its a massive costly process of all this paperwork, he said. And presumably, there needs to be an appeal process if someone didn’t agree with Canada Posts decision.

Toronto resident Pasquale Ferrari, 57, who uses a wheelchair, says getting to a community mailbox would be difficult, especially in bad weather.

Its hard for people like me to go out, especially when it snows, rains or its icy, said Ferrari, who suffered a spinal cord injury in a car accident when he was a toddler.

Ferrari says he isn’t comfortable giving his mailbox key to someone else, saying his mail contains cheques. I don’t want someone else to take it. Its personal, he said.

However, Ferrari says he would be happy to get a doctors note if it ensures he can continue to receive home delivery. If I have to fill out a form or get a doctors note, I dont have a problem with that, he said.