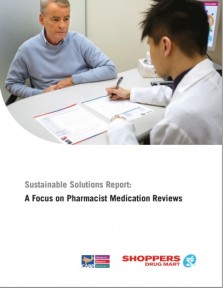 rticle published by the Canadian Health Care Network on August 26th, 2014, offers a good coverage of the Shopper’s Drugmart/CARP report issued in late august.  The report received rather extensive media coverage – this piece offers one of the best reviews of the report itself.

Shoppers Drug Mart and CARP have partnered on a new report that calls for a comprehensive, universal approach to medication reviews across the country.

Titled Sustainable Solutions Report: A Focus on Pharmacist Medication Reviews, it educates readers on what medication reviews are and how pharmacists use the service to help reduce costly and potentially harmful drug therapy problems.

The document then urges governments to open the program up so that Canadians have equal access to it, collecting different sets of research to make the case for expanded coverage.

One study shows that among CARP members who have undergone a medication review, the vast majority say they are beneficial and would recommend them to others. The report also shows there is strong support from physicians for pharmacist-led medication reviews.

A patchwork approachBut, as the document illustrates in a table comparing the different coverage and eligibility criteria in place from province to province, governments have taken a patchwork approach to the service.

To improve health outcomes, it makes sense for all Canadians to have equal access

Eight out of 10 have some form of coverage of medication reviews (the exceptions being Manitoba and Quebec). And each of those provinces use different criteria to decide who qualifies for the program.

In B.C. and Ontario, as examples, you must be on a certain number of medications. In other parts of the country, its restricted to patients with certain diseases.

So its very unequal and inequitable, says Jeanette Wang, senior vice president, professional affairs and services at Shoppers. To improve health outcomes, it makes sense for all Canadians to have equal access.

As a national organization advancing the rights of Canadians as we age, we encourage the idea of uniformity in health care wherever you live, says Ross Mayot, the associations vice president and general manager.

Alberta the gold standard?Wang cites Albertas comprehensive offering as a strong example for other regions to follow.

Its basic medication review is called a Standard Medication Management Assessment (SMMA). To qualify for the service, Albertans must be on three or more medications, have one or more chronic conditions and be a member of the Alberta Health Care Insurance Plan.

The province covers more advanced reviews as well, such as SMMAs for diabetes and smoking cessation and a Comprehensive Annual Care Plan.

Patient satisfaction for that particular service in Alberta is particularly high, notes Wang. So its a model that other provinces can emulate.

Though Mayot notes that home medication reviews, which are covered in some provinces but not in Alberta, are an important service to his members.

Fodder for premiersThe pair released the document today in time for the start of the Council of the Federation meetings in Charlottetown, where Canadas premiers are gathering over several days to discuss a range of issues.

Whats more, medication non-adherence results in an annual cost of $7-9 billion to the healthcare system and 125,000 unnecessary deaths per year.

Pharmacists can help in both regards, the document notes.

Along with promoting the report to governments, Shoppers is reaching out to associations, regulatory bodies and patients groups. For its part, CARP is using the document to encourage its members to ask their pharmacists about medication reviews.

Part of an ongoing seriesThe report is the third installment in Shoppers Sustainable Solutions series.

The pharmacy chain works with different partners on the reports to explore ways pharmacists could contribute more to improving Canadas health system.

For the first chapter, released May 2013, Shoppers collaborated with two arthritis groups to look at ways pharmacists could improve chronic disease management.

The company produced the second document on immunizations itself and released that one last winter.

CARP got involved with the third installment since medication reviews are particularly important for older Canadians, as many are on multiple medications for various conditions.

A recent poll of CARP members confirmed this fact. It found that one-third are currently taking an average of four to five prescription medications.

The association first started surveying its members about issues related to the cost and accessibility of health care in 2012. One of the first questions it asked was if they saw an enhanced role for pharmacists in healthcare management. The majority said yes.

Then last year, CARP asked its members who theyd trust more with medication advice;doctors or pharmacists. To our surprise, many felt that the discussion with the pharmacist would be more beneficial, says Mayot.

With its recent track record, he says it made sense for the association to get involved when it was approached by Shoppers to partner on some research.

Can pharmacists handle more demand?If the report serves its purpose and helps to expand coverage of medication reviews, demand for the service would undoubtedly increase.

But with concerns that pharmacists are already struggling to find the time to perform cognitive services and that the quality of these offerings is suffering as a result, some wonder if pharmacists can manage taking more on.

On that note, Wang says Shoppers is taking a twofold approach. For one, it has investing heavily in training pharmacists, regulated techs and assistants.

Two, it is launching a new version of its dispensing software Health Watch. The latest edition, which is launching next year, incorporates more time for cognitive services into its workflow.

Wang expects the program will free up pharmacists to spend more time with patients.

Technology will definitely provide support so pharmacists can do more of these services.

To view the full report, click here.  Download the report for full research results and a province by province comparison of med review programs