The Middle-Aged Guide to Growing Up: Filling The Bucket - CARP
Join Donate Sign In

A. Boomer is a CARP member who shares his experiences growing up middle aged, every two weeks in the CARP ActionOnline newsletter. He is back by popular demand with his new blog, The Middle Aged Guide to Growing Up, after completing his previous blog, the Caregivers Diary, which concluded upon the death of the parents for whom he cared. He deals with his finances, health, food and all the problems Boomers experience as they discover theyre actually going to grow old. 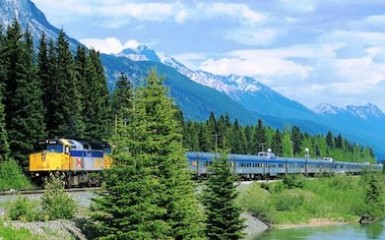 Im a Boomer, and I just chalked up the three score Im allotted, but I expect a lot more than ten more. I figure I have the genes, temperament and persistence to live to about 95. That means I have 35 years or so to do everything on my bucket list.

Its not very long, Ive been filling it in like a birders life list since forever. Ive been hang gliding, the closes thing to bird flight there is, and felt the lift of the wind in the silence above the pines. Ive been scuba diving on the Barrier Reef off Belize, sitting in the lotus position on the pure white sand bottom, watching Hammerheads swim over me. Ive flown over the Great Divide at dawn in a helicopter, listening to Bach and watching the rising sun glint off the high snowfields.

Ive power-hiked through cathedrals of trees as old as history, uplifted by the dense, deafening silence. Ive hiked out on the gunwale in 30 knots of wind, racing for harbour before the sheets of rain come. Ive slept in the snow, snug in my sleeping bag beneath a recent fall, waking to shake the flakes out of my eyes. Ive hitched a locomotive ride on a freight train across the valleys of New England in the full flame of fall.

Ive had a small but important influence on national affairs, Ive seen the temples of Palenque under the moonlight when no one else was there. Ive woken up every May 10th for 14 years to see the False Pear tree in the backyard as white with blossoms as a huge ice cream cone.

There are a few things Id like to do, mostly because they werent available previously. Id like to fly First Class on an Etihad Airways Airbus A380 to London, with the separate cabin with living room, bedroom and bathroom with a shower. Id return from this trip in a balcony cabin on the Queen Mary 2. Id like to see the Drakensberg Mountains in South Africa, as battlemented as a gigantic castle. Id like to work on an archaeological dig on Norse remains in North America.

A constant theme in my bucket list is sleeping while traveling. I took the Via Rail Canadian across the country to Banff with my wife, in a suite, and sleeping to the clickety-click of the rails is as romantic as they say it is. Id also like to try a bedroom on a plane, a bunk on a submarine and a bed on a bus. It isnt generally known, but the Canadian service has one super suite on each train, which sleeps 5 and has the only shower aboard. Its located under the observation dome on the tail end car

That trip across Canada by train bears special remembering. It was one of the very last departures to take the southern route, through Calgary and Banff. The country was gripped in a brutal cold spell, and half the trains leaving Toronto werent making it (ours did). The sun had set when we left Toronto, and Sudbury came about midnight. Our beds were warm and they rocked with the motion of the train. We woke the next morning in Wawa, the train sheathed in ice, and we watched as they loaded crates of still-flapping trout for our lunch. All afternoon the train was filled with the smell of the roast cooking for dinner that night, with mashed potatoes and fresh-baked hot rolls.

Another magic nights sleep in our warm cabin, watching the Boreal Forest click by. Midnight in Winnipeg, so cold spit froze before it hit the ground. We bundled up and walked the platform for air, amazed that a train so sheathed in ice (from escaping steam) could function. The rest of the night into the prairies, then breakfast in Saskatchewan. Teatime in Calgary and bed-time in Banff and the trip was over.

Although the Canadian travels the northern route through Edmonton and Jasper now, and crosses the Rockies at night, it is still a bucket list item that every Canadian should try once. The stainless steel 1960s running stock was built for the ages and has recently been refurbished – the dome cars and the sleeping cars will still be there for a while. Its a trip never to be forgotten, and the lullaby of the rails is magic.

Editor’s Note: As an aside to readers who love the idea of Canadian travel, you will likely adore this stunning miniature photography project.  Halifax-based artist Jeff Friesen’s latest project will surely appeal to Canadian railroad and antique train lovers… “The Canadian: Ghost Train Crossing Canada” is absolutely beautiful – should you want to have a peek.  Here is one of the thirty pieces from Friesen’s project, to view the entire collection in high-definition be sure to stop by the artist’s website, (this links to the gallery containing all the images). 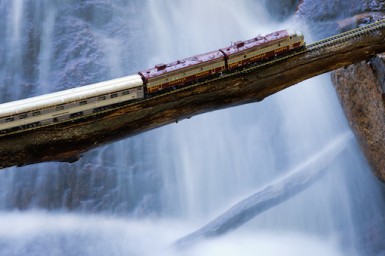