The Middle-Aged Guide to Growing Up: Polls Apart - CARP
Join Donate Sign In 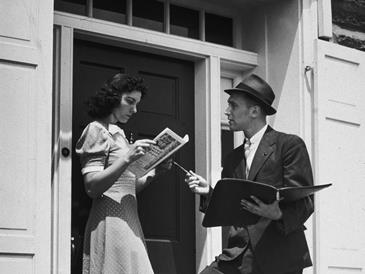 Im a Boomer, old enough that when I started working in the market research business, we used punch cards for the computer. If you spilled a tray, you had a massive data error which could only be rectified by counting and sorting them by hand. My first fax machine was the size of a refrigerator. I had a big hotel ashtray on my desk, and I used it. How long ago was this? Well the Blue Jays won their first divisional pennant that fall, you do the math.

Im a pollster now, and I cut my teeth at Gallup. What we did was so widely published and so well known, we were the Kleenex of the industry, a brand name which had come to be generic. We had very high response rates because many people actually thought we were a government agency, like the census.

When I worked there, we were still doing the Poll door-to-door, in person. As a junior analyst, I was expected to do a pack of surveys, by walking in a prescribed direction around the block, knocking at doors at a prescribed interval. When we found someone in, as often as not, wed be fed tea while we did the survey. The Poll was up to 45 minutes long in those days, and conducted in person, both of which are unthinkable today.

We polled 2 Quebec referendums, both hair-raising experiences, as we were basically doing the trial-runs for the break-up of a nation. There was the occasion we polled more people who thought Elvis was alive, or didn’t know one way or another, than approved of the Conservative Prime Minister. Back in the 40s and 50s, Canada was convulsed by coloured and uncoloured margarine, which was preferred being the most polled question of the day.

It wasn’t all door-to-door political polling. In 1990, I did a huge tourism survey for a Rocky Mountain province. It was a cordon survey, which means we threw a cordon of interviewers around the province, at every exit, airport, bus station and train station, and you didn’t get out until you’d been interviewed. This survey went on for a full year, summer and winter. We had 100 people working on it, 8 crews with Chevy Suburbans packed with traffic cones and highway diversion signs. I trained them on how to cruise down the highway in one direction and back the other, dropping cones and signs out the tailgate while two crew walked along and lined them up. I taught them how to make smooth easy curves with their cones which would naturally guide the driver to the interview site at the side of the road.

There was a point when, leading up to the project, I was so interested in buying used Suburbans, that I would approach people in parking lots and try to buy their trucks from them. Gee, that a fine truck. How much do you want for it?. The Suburban is the perfect vehicle for highway work. It has a capacious interior cargo compartment for all your signs and cones, and also seating in comfort for about 7. They also last forever, one of the last truly well-built Detroit tanks.

The province in question has a reputation for prickly self-sufficiency, and not everyone was happy at being diverted to the side of the road and interviewed. Sometimes, we would see the car approaching pull over, and something would be thrown out the window. In several cases, we saw drivers turn around after being interviewed to go back and pick up whatever it was they had disposed of upon seeing our signs.

We set up our sites at lonely highway crossings all around the borders of the province, in winter and summer, fair weather and foul. At one winter shift, high in the Rockies at the Divide, a late model sedan cruised into the diversion site and stopped. The driver was slumped over the wheel, dead. He had apparently stroked out just as he was pulling in. At another site further north in the Rockies, an inquisitive black bear kept cruising the site, chasing the crew into the Suburban behind locked doors. At the airport shifts, we ran into the NATO foreign ministers, the New Kids on the Block and Reveen the Magician. We interviewed them all, including the Honourable Joe Clark.

Midway through the project, in July, I cleared the schedule and invited all the crews from all over the province to bring their Suburbans to a rented house on a golf resort in the middle of the province for a three day party. Boy oh boy, was that a shindig. We had steak for three days, the beer was laid on and didn’t run out and there was room for everyone who wanted to to sleep (some didn’t). One couple, a crew chief and his wife, brought their 8 year old daughter, Destiny. Destiny had drowned her baby brother in a swimming pool when she was 5, and didn’t look like she had forgotten about it.

I made one mistake at the midsummer party. I had my field coordinator order the steaks (this being a steak producing province of note) and gave him a serious budget. He got a great deal on about 60 boxes of steak, and we got more than we really needed. It wasn’t until we got to the party site that we realized the boxes all said Product of Australia. We had bought 60 boxes of Australian steaks for people from a province that thought of itself as the best steak producer in North America. It was liking bringing coals to Newcastle, only with national pride mixed in. We unpacked the steaks and burned the boxes as soon as we realized, and before the crews arrived.

Id go out west every month or so to pay a surprise visit to a couple of crews, to keep them on their toes. Id rent the biggest land yacht I could find at the airport, rent a Motorola Brick phone (remember those?) and head off for the border. It got so the crews began to suspect any big sedan with one person in it arriving at sunset (I liked to arrive at the end of a shift when their guard was down, and help with tearing down the site and packing the truck). I learned to love country music, insane talk radio drifting over the border from the US late at night and bottles of cheap cognac. The kind of motels I was staying at (the only ones available) didn’t have CNN, so there was nothing to do at night but drink and go to the bar and watch the boot-scooting locals, so graceful in their cowboy hats and tight jeans.

That was the year Ian Tyson’s album Cowboyography dropped, and everything that was magic about that experience in the Rockies is in the songs on that album:

Bald eagles back in the cottonwood tree; old brown hills are just about bare.

Springtimes sighing all along the creek, magpies ganging up everywhere

Sun shines warm on the Eastern Slope, March came in like a lamb for a change.

Gary’s pulling calves up the Old Stampede, we made it through another on the Northern Range,

Lonnies pulling calves at the Top of the World, we made it through another on the Northern Range.