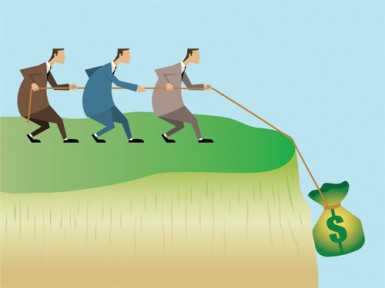 Canadian health care is a mix of publicly and privately paid services. As the population ages, services such as home or personal care, nursing home care, or medical equipment will become increasingly important to the growing number of seniors, and not all this care will be publicly covered. One of the objectives of the EKOS Research Associates survey of home and residential care for the Conference Board is to understand Canadians opinions about how they will pay potential out-of-pocket costs.

The most frequently-cited sources were personal savings, such as registered retirement savings plans, followed by government sources and employer pensions. (See chart.)

The survey results provide additional insights when regional and demographic breakdowns are examined. Men, for example, were more likely than women to say that they would cover costs using private sources of income (savings, assets, and private insurance).

The responses by age offer some valuable insights into the perspectives of younger Canadians. Responses from the 3554 and 55-and-over age groups generally matched the overall results. Younger respondents, however, envisioned a different mix of income in retirement than their elder counterparts.

Young Canadians indicated they were more likely to use employer pension income (47 per cent, compared with 41 per cent overall), even though the number of workers with registered pension plans has barely grown in the past five years.2 They were also significantly more likely to say that they would have private insurance to cover out-of-pocket medical expenditures (35 per cent versus 27 per cent overall).

By income, results generally followed the conventional wisdom, in that those in higher-income ranges were more likely than lower-income respondents to say that they would use personal savings, private insurance, assets, or workplace pensions to pay for health costs. However, it is worth noting that government pensions were the only source of funds that was selected in roughly the same proportion across all income groups;more than 55 per cent of respondents in each of the income groups said that programs such as Old Age Security and the Canada Pension Plan would help them pay for out-of-pocket health costs. This suggests that government funds remain widely supported as a valued source of retirement income at all levels of personal wealth.

Government support was seen as an essential source of income in Atlantic Canada, which was the only region where government pension programs (62 per cent) were more frequently identified than personal savings (52 per cent). At more than 10 percentage points below the national average, Atlantic Canadians were also the least likely respondents to indicate that they would use personal savings to cover out-of-pocket health costs in retirement.

Responses from Ontario and Alberta residents generally reflected the national results, although Albertans (68 per cent) were also the most likely to state that they would use government benefits to cover out-of-pocket costs. Quebecers were the most likely to say that they did not know how they would pay for out-of-pocket expenses;14 per cent said they did not know, almost 5 percentage points higher than the national average.

These results indicate that, while some sources of income are more widely cited than others, Canadians will have multiple potential ways to cover out-of-pocket health costs in retirement. While this variety of funding sources is a benefit (since most Canadians will have multiple streams of income to access when paying for services), it leaves some uncertainty as to whether Canadians can cover out-of-pocket costs.

The next article in this series helps to answer how Canadians believe senior care, and the caregivers themselves, should be supported financially. Findings from the first of these studies, a base case forecast of supply and demand of senior care, will be presented on October 23 in Toronto at the Conference Boards Health Summit 2014: Aging, Chronic Disease, and Wellness.

Saving Retirement Savings: Why It Is Good for Canadians and the Economy