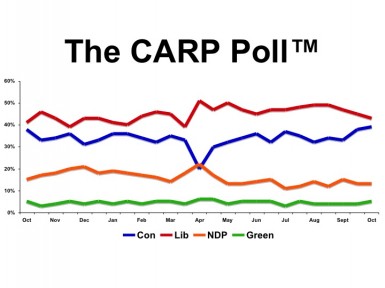 Only about one half of members are familiar with PRPPs and few agree they are a good solution to Canada’s pension problem or that they would enroll (or would have enrolled) in a PRPP.

There is wide agreement the ORPP is an effective solution for the pension problem and, while DC and DB plans are seen to be comparable to the ORPP for substitution purposes, the PRPP is not. On the other hand, they are seen to be just another group savings vehicle like an RRSP.

Many think CPP needs to be expanded to bridge the gap between current CPP, ORPP and the 70% pre-retirement income target. Members think those with incomes below about $24,000 should be excused from the ORPP.

It is expected that both the Liberals and the NDP will seek to expand CPP in their mandate, while a Conservative government would not act on pensions. Pension reform is a ballot box question for 4-in-10. However, there is little hope for ORPP’s widespread success or adoption.

Just less than half of members will vote Liberal if the election were held today, while just more than one third would vote Conservative. One sixth or so will vote NDP.