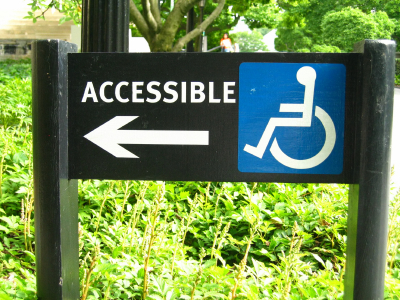 Editor’s Note: This column is a guest-article penned by architect and author David Reich (full bio below). The author explains how he adapted his home to meet his evolving needs and decreasing mobility.

I live in a home that I’ve cherished for 45 years; it survived six children, contains a lifetime of my work and a treasury of family history, all the while enduring a series of transformations to meet my evolving needs. It now suits me in every respect. I’d planned to die here, but hadn’t set a date, when my schedule was interrupted by a series of unanticipated events.

It all began 64 years ago. I was 23 years old, picking cucumbers on a kibbutz in Israel. I remembered nothing of that July morning until I regained consciousness in a hospital, emerging from a hallucinatory week of spiking temperatures. I was weak, disoriented and surrounded by doctors questioning my double vision and inability to walk. The verdict was polio. I had the misfortune to acquire the virus two years before Dr. Salk chose to perfect his vaccine. Fortunately, despite his untimely lapse, I recovered almost completely, and was able to lead a full life, play tennis, lumber along a jogging track and practice successfully as an architect. But polio, being cheated of a victim, hadn’t forgotten me; about 40 years later, when I thought that I was safely free of the disease, my legs began to weaken. During the next two decades I progressed from a cane to a walker to a wheel chair. ‘Post polio syndrome’ they called it, the frequent consequence of missing neurons. My three story home was no longer a safe, comfortable haven. I was trapped by stairs, undersized bathrooms, raised door sills at too narrow doorways, and frustrated by awkwardly situated light switches, inconvenient door swings, and bathrooms with fixtures that only acrobats could use.

I was confronted by existential choices.

Should I retire to an assisted living facility, or buy another home more responsive to my limitations, or use my professional skills to mobilize advances of rehabilitation technology without relocating myself? I accepted that any choice would cost a portion of my retirement savings.

My heart told me to dwell at home and and fight for my legs.

But I had three floor levels to overcome and I needed to move conveniently and safely between them. I was delighted to find a lift with a seat mounted on rails that could carry me to from my basement office to my third floor bedroom, turning corners and coasting along corridors. I then placed small but highly maneuverable wheel chairs at each floor so that I could sit at my dining room table or my desk. For outside mobility I acquired and modified a car large enough to receive a motorized scooter that was stored on a platform that would rise at the touch of a button from the sidewalk and retract into the vehicle.

When I could still stumble along, I relied on wall-mounted railings that allowed me to lurch about until even this pleasure was denied me. But I profited from this experience. I was dissatisfied with railings on the market; they wouldn’t allow my hands to slide continuously along surfaces and around corners, they couldn’t readily and economically be fitted to my stair configurations or easily secured to wall supports. I was challenged after much experimentation I invented, patented, tested and insured greatly improved railings [‘PromenAid] that are now sold across Canada and the United States.

There were many smaller but very useful improvements: removing or modifying partitions, eliminating raised door sills; enlarging door widths using hinges with extended flanges and modifying my shower to accommodate a wheeled commode.

The battle was long, arduous and often frustrating, requiring hours of identifying and specifying equipment and more days of visiting showrooms to ensure it would perform as advertised.

Although these improvements were costly, I was delighted to find government assistance was available for those hardy and patient enough to investigate and apply for benefits and take advantage of tax reductions favoring a rapidly aging population.

Fortunately not all of us ‘oldies’ require the extensive improvements I described. Nevertheless, even minor changes to our living space can help us to live longer and more safely despite our creaking backs and wobbly knees. Possibly in the afterlife we’ll be spared all suffering, but why wait? Let’s make our lives more livable while we’re able. Architects, physiotherapists and occupational therapists are skilled in evaluating your needs and proposing surprisingly imaginative measures. It’s your choice.

David Reich was born and seasoned in Montreal. Burdened by university degrees from McGill (B. Arch) and Concordia (M. Eng), he enjoyed a 55-year career as an architect in many countries, and taught construction technologies at Dawson College and Vanier College for twenty years. Now in his anecdotage, he concentrates on the pleasures and disappointments of writing, and has published 12 books. Recently, encouraged by the enthusiastic acclaim of six children and 15 grandchildren he convinced an unsuspecting editor (Baraka Books) to publish a memoir: “You Could Lose an Eye: My First 80 years in Montreal”, also available in French (Les Editions de Septentrion).