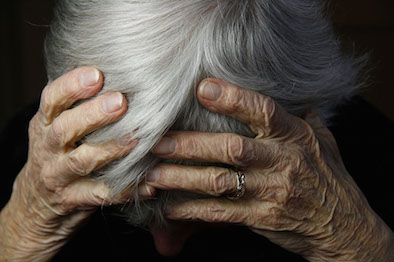 An Orillia couple found guilty of not providing proper care for an elderly woman will spend a year in jail.

Diana and James Davy were found guilty in October 2014 on two counts of failing to provide the necessities of life for Diane’s mother – 76-year-old Viola Simonds.

Family members packed the courtroom on Friday to hear the judge’s ruling and for many the sentence was a relief.

“I was nervous they were going to just get a slap on the wrist because that is precedent from a lot of former cases and if they got to go home tonight that would be frustrating for me,” said Viola’s grandson Michael Simonds.

Simonds was found in her bed in the Davy’s home in 2011 covered in vomit, urine and feces. The windows had been spray painted black and she was also suffering from a broken hip.  She died a few months later.  To read this full story via CTV News, please click here.

Background on the Viola Simonds Financial Abuse and Neglect Case: The System Failed to Protect Ms. Simonds.  Clearly, we have a long way to go before in order to address shortcomings in our system – vulnerable adults are everyone’s responsibility and in so doing they are often no one’s responsibility.  The following shows that various agencies missed several opportunities to save Ms. Simonds before it was too late.  Duty to report, for instance, might have saved Ms. Simonds after her first emergency room visit in 2008.

The Simonds family doctor also suspected abuse and tried to remove the daughter as power of attorney, court heard. Dr. David Collins set up a hearing before the Consent Capacity Board, but the board refused. Instead the board ordered supervised visits to the home, but the couple who had a history of evictions, took Simonds and moved and could not be found.

Three years later (May, 2011), Simonds was found  (exact details of how are not disclosed) by paramedics in squalor, lying in vomit, feces and blood, crying in pain and calling for her “momma”, court heard.

Simonds who worked as a nurse, received various monthly pensions each month, which her daughter controlled as her power of attorney. When her daughter was charged, Simonds was taken to a long-term care facility, but was too weak to have her hip repaired and the starvation and dehydration caused irreparable organ damage. She died months later.