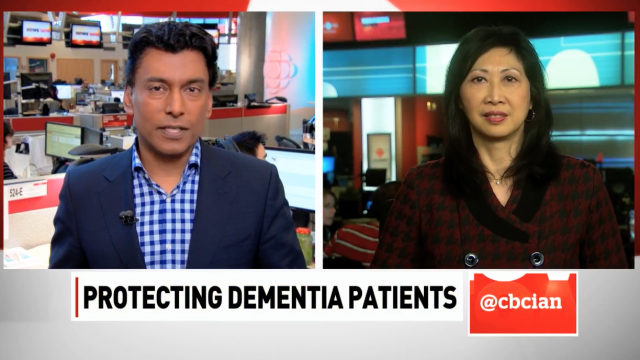 Susan Eng did two television interviews last week when she was invited to give context and provide commentary on the story of two women devastated by the effects of dementia on their loved one.  The story was making the rounds of the news circuit because is incredibly relevant and it is a David v. Goliath story…Debbie Radloff-Gabriel fought Sun Life Financial for four years – and her financial future is six figures richer for it.

It began when Mrs. Radloff-Gabriel contacted the company over an impaired and life-altering phone call her husband had made while in a state of dementia, according to the CBC. It nearly cost the family in the hundreds of thousands.

Bruce Gabriel has Alzheimer’s and vascular dementia – diseases that cause the mind to deteriorate. In 2010, while his wife was away at work, he called his insurance agent to cancel his two policies. He’d paid more than $17,000 in premiums since signing up for them in 1983 – and cashed out for less than $2,000 on plans that would have paid out $140,000 to his family at the time of his death.

Sun Life repeatedly refused to make things right for the Gabriel family, but after questions from Go Public it has promised to reinstate both policies. (CBC)

CBC News asked Susan Eng to Comment on this incident since we can unfortunately expect it will not be isolated… The Alzheimer Society has asked all financial institutions to review their policies and strive for compassion and flexibility. This would be a wise course of action the number of Canadians is living with dementia is expected to double in the coming years.

The following video features Susan Eng, VP of Advocacy at CARP interview with Carole MacNeil on CBC News Now (February 23, 2015), speaking about the need for financial institutions to protect the interests of their clients, especially in cases of deteriorating capacity, such as dementia. Susan discusses some measures that families can proactively undertake to establish safeguards for future financial decision-making.

This video features Susan Eng, VP of Advocacy at CARP interview with Ian Hanomansing on CBC News (February 23, 2015) speaking about the measures that dementia patients and their family members should undertake when communicating with financial and other institutions.