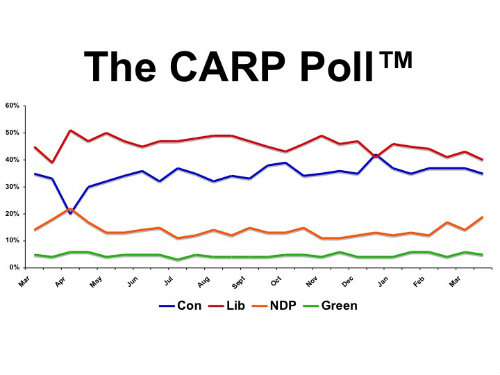 April 2, 2015: Most members do not agree the Canadian government does a good job of tending to seniors’ needs and concerns, and when asked what these concerns are, health care reform and ensuring equal opportunity for all age groups come first. The leading social determinant of health is seen to be, naturally, income, followed by retirement security, nutrition and education. When asked which factors most impact quality of life, health care and pension reform are seen to be the most important, rather than income inequality or housing.

Most members think significant pension reform is necessary to ensure seniors don’t outlive their money though few agree that it’s personally important to them to reduce the age of OAS to 65 again, they agree it is important for Canada. For almost every other CARP advocacy measure, however, members exhibit close to unanimous agreement, including:

A seniors’ housing strategy is seen to hinge on two different thrusts – allowing seniors to stay at home and providing affordable housing. The best way to solve income inequality is seen to be a National Guaranteed Minimum Annual Income, as well as a Universal Pension Plan to supplement CPP, a limit to CEO salaries and increased income supports for low income seniors.

Most members disagree with replacing income testing for need with means testing, and few agree seniors should be forced to sell the family home when they need to move into care. Fully one half would withhold their vote from a politician who supported means testing, even if it were the party usually voted for.

The Liberals continue to lead in member voting preference, trailed by the Conservatives. The NDP is in third place, but is increasing in support at the expense of the other two parties. Despite this, members are more likely to expect the Conservatives to win the next election than they are the Liberals.