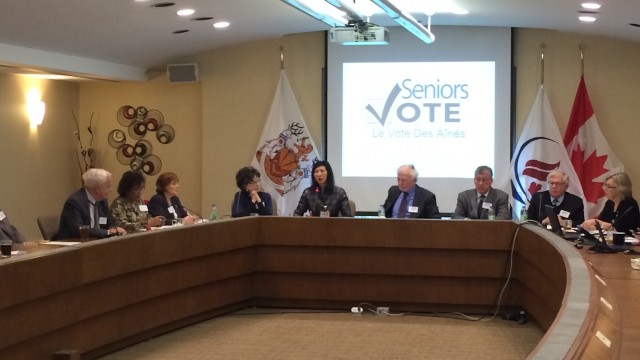 In anticipation of the spring federal budget and upcoming election, CARP in collaboration with over 50 organizations across Canada have formed Seniors Vote/ Le Vote des Aînés, a nation-wide initiative comprised of seniors, retirees, professionals and advocacy groups, representing over a million seniors who demand action on retirement security and healthcare reform. Collaboration of this magnitude urges political parties to act on these important issues.

To kick off the Seniors Vote campaign, an open letter was sent in April to federal, provincial and territorial finance ministers and critics, voicing concerns that particularly resonate with older Canadians, and providing a list of actionable recommendations and priority issues for the 2015 federal budget and election.

To raise awareness of the issues outlined in the Seniors Vote, representatives of the campaign hosted a pre-budget event on April 20th in Ottawa, a day before the federal budget would be tabled in Parliament. The pre-budget event provided an opportunity for MP’s from all parties to meet with Seniors Vote representatives to discuss the issues and how they can be addressed better by the government.

With preparations for the federal election underway, Seniors Vote also calls for comprehensive pension reform by expanding access to pensions and increasing income supports for low-income seniors to ensure that people have enough financial means during their retirement years. Achieving income security in working life and retirement is increasingly difficult for Canadians of all ages.

Seniors Vote specifically calls on the federal government to:

Healthcare remains the highest priority for Canadians who demand transformative change. Canadians are increasingly treated as health consumers or merely patients, rather than as “healthcare citizens” who pay for the system and expect it to serve the values set out in the Canada Health Act – universality, accessibility and comprehensiveness. To do this, the healthcare system must undergo transformative change and center itself on the needs and expectations of the patient.

The Seniors Vote campaign will continue to push all parties to address the pressing issues Canadians face as they age, in the lead-up to the federal election and during the campaigns. This year on October 1st in celebration of the International Day of Older Persons, Seniors Vote campaign will organize flag raising ceremonies at city halls across Canada to make sure that all politicians know that older Canadians are the strongest voting demographic and they demand action on the key issues of financial security and healthcare transformation.