The Middle-Age Guide to Growing Up: A Fun Crowd - CARP
Join Donate Sign In 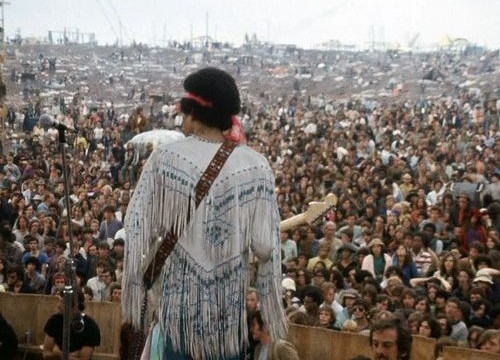 I’m a Boomer, and, unlike hundreds of thousands of people my age, I had an actual ticket to Woodstock ($7 a day for three days) but didn’t go. I was 15 and I couldn’t get a ride (from my home a hundred miles away in Connecticut). I was full of regret at my friends’ stories of music, mud and marijuana (there wasn’t much sex, not enough privacy).

So, four years later, at 4:30 one Friday morning in July 1973, three friends and I piled into someone’s mother’s station wagon and headed off for Watkin’s Glen, NY, in the Finger Lakes, the former site of the US Grand Prix, and still an active racetrack. Our destination was Summer Jam 73, “to be held rain or shine”, featuring The Grateful Dead, The Band and The Allman Brothers.

We started to run into pre-show traffic around Syracuse, still 70 miles from the concert site. We’d all seen the film Woodstock. We had visions of hiking for a day to get in, and missing the show (it was a one-day affair, all Saturday and late into the night). We were going to be there a day early. So apparently, were hundreds of thousands of others.

We got through Watkin’s Glen (the race track was on the other side of town) and parked in the increasingly dense fleet of cars beside the road. We hitched a ride with a caretakers’ pickup truck that had right of way right up to the back door of the concert site. Just like in the film, the chicken wire fence had been trampled and there was no one around collecting our tickets ($10).

There was a pop-top VW van, however, with a big hand painted sign on the roof saying “Grass – $10”. As we hadn’t brought any, crossing the border and all, this was very welcome. There was a guy sitting at a card table out front of the van filling baggies from a garbage bag at his feet as fast as he could, while a girl beside him took the $10 bills. Inside the van, they were pushing more garbage gags out the door. Business was brisk.

When we got past the fence and the van, we were in the field, at the top of a long slope leading down to the stage, with the woods in the background and a small pond hidden in the trees. We had a theory that the sound would be best by the mixing board, so we went to the middle of the field where the control station was and sat right in front of it. We basically didn’t move from there for two days.

OK, you’re thinking about toilets. So were we. They had learned since Woodstock, and there were probably a thousand well-attended porta-potties lined up at the back. The line-ups weren’t long, and they were frequently cleaned, so it wasn’t horrible. What was difficult was making your way through 100 acres of packed humanity and then finding your way back. I have no idea what people who didn’t have a reference like the mixing board to return to did.

By the time we got in and settled, it was drawing on evening, and the Grateful Dead were finishing their legendary three hour sound check – a major concert in itself which survives on (of course) a bootleg. I was used to the San Francisco Dead of the Workingman’s Dead album, scruffy, bearded, hairy, strictly civilians. But the Grateful Dead lined up on stage down there about 200 feet away looked like the Beach Boys. Haircuts, white pants, sports shirts, they might have been a boy band. Their music was anything but puerile, though.

We had missed The Band’s and The Allman Brothers’ sound checks early in the day, but this was a concert worth the price of admission alone. The Dead were clearly into it, tearing off Tennessee Jed, Sugaree and others as though it was a headline show and they meant it. They were used to doing 6 shows a week, so this was probably not hard for them. We went to sleep (sort of) in our sleeping bags on the hard ground, after a dinner of trail mix and Caribou (red wine mixed with Rye Whiskey, the Quebec concert-goer’s drink of choice).

The Dead opened the next morning about 11 AM, playing two long sets filled with classics. They were followed by The Band, who only got one set in before the clouds opened and a drenching downpour happened (apparently you can’t have a rock festival without mud). We didn’t bother sheltering, it was warm, and everything we owned was soaked. Kids around us were taking their clothes off and dancing naked in the rain.

The rain had driven everyone off the stage except big old crazy Garth Hudson, The Band’s keyboard player. He just stood there playing sweeping arpeggios through the rain on the Hammond B3. The Band released an album of the Watkin’s Glen concert, and this bit is called “Too Wet To Work”. When the rain let up, the rest of The Band slipped on stage and following Garth’s lead, slipped into “Chest Fever.”

The Allman Brothers followed The Band and played for hours, all their hits (and this was a banner year for the Allmans). At the end of the evening, the three sets of musicians jammed for another hour or two, covering The Dead’s show closers “Johnny B Goode” and “Not Fade Away”.

Six hundred thousand people attended, the largest US city north of NYC. It’s said one third of all the people between 15 and 35 in the northeastern US were there. The worst thing that happened, besides the rain, was someone who couldn’t abide the line ups and tried to parachute in. His chute failed and he landed in the crowd, but he didn’t take anybody with him.

That was the largest audience for a concert in history until some time in the mid-80s, when The Chieftains played for a million people in Phoenix Park, Dublin. The Chieftains were opening for the Pope, though, and that’s a hard act to follow.