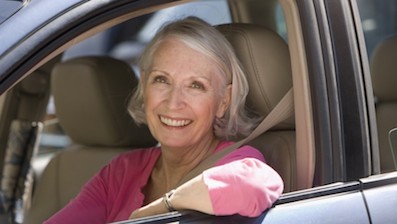 CAROL IN YOUR CORNER: DRIVING OLDER, AND DRIVING WISER (with apologies for the lapse in grammar)

One of the most frequent irritations for CARP members is the apparent prejudice against senior drivers. Governments rely on statistics which purport to show that there is an increase in serious accidents as people age. CARP has explored this issue in depth over the years and we have found that advancing age has very little correlation to accident rate. Governments have numbers which indicate that crashes among drivers over 80 – per kilometres driven – are similar to those of new, young drivers. Our research shows that older drivers on the whole, voluntarily avoid dangerous situations, for example, by not driving in poor weather conditions, eliminating night driving if oncoming lights are a problem, avoiding fast-speed highways if these make them uncomfortable; and they do not tailgate, text or talk on the phone. In addition, their long experience makes them recognize potentially dangerous situations. Because they self- limit, the statistics are skewed when accident numbers are counted.

In Canada, only British Columbia, Alberta, Ontario and the Northwest Territories have special licence renewal requirements that are age related.

To renew a licence in British Columbia, drivers at the age of 80 are required to have a medical fitness test. If the doctor believes there is a medical problem, this might be followed by the DriveABLE touch screen test which was designed to determine cognitive ability, or – to be more precise – to detect cognitive disability. However, because of numerous complaints from seniors and because research from other jurisdictions has cast doubt on the accuracy of DriveABLE results, the government made changes, allowing road assessments for those who fail the touch-screen test. However, the decision is based on a combination of the two tests, plus the doctor’s evaluation. The process remains controversial. While there is no charge for DriveABLE or the road test, there is for the medical test. What’s more, it varies from doctor to doctor. For more information on driver licensing and driver testing, contact the Office of the Superintendent of Motor Vehicles. Phone (toll-free): call Enquiry BC at 1-800-663-7867, and ask to be transferred to (250)387-7747 Phone (Victoria): (250)387-7747 Website: www.pssg.gov.bc.ca/osmv/medical-fitness/index.htm

In Alberta, drivers at age 75 must pass medical fitness tests. Although the SIMARD cognitive and the DriveABLE touch-screen tests have been widely promoted, Wayne Drysdale, Minister of Transportation has stated that drivers are not obligated to take these controversial tests, and can request other medical and driving fitness examinations. The next series of tests for licence renewal is at age 80 and every two years thereafter. More information is available in the ministry pamphlet which you can find at: http://transportation.alberta.ca/content/docType45/Production/SeniorsPamphlet.pdf

Northwest Territories requires medical tests for drivers of different ages. You can find details at: http://www.dmv.dot.gov.nt.ca/node/65

2.  Ontario recently changed its program for assessing drivers 80 and over. From age 80 and every two years thereafter, senior drivers are required to attend an education session, at which they will also be given a visual test and take a short cognitive test . Details can be found on the Ministry website: http://www.mto.gov.on.ca/english/driver/senior-driver-licence-renewal-program.shtml

While in CARP’S view, ability rather than age is the determining factor, we do recognize that some medical conditions at any age can be a problem for drivers. In this area, all provinces have regulations and programs which deal with physical or mental conditions that could affect driving ability, permanently or temporarily.

In every province and territory, physicians and optometrists are required to report if a patient has a condition that they feel could impair their driving ability and this could also extend to reports from nurse practitioners, police and occupational therapists.

In Ontario, if the ministry receives this information from any of the above, they will check it along with the person’s driving record to determine if, in their view, he or she is still medically fit to drive. The process takes up to 30 business days.

In general, there are three possible outcomes: if the ministry believes the condition is serious enough to impair safe driving, the licence will be suspended, but you will be told what kind of medical information is needed if you believe you should have your licence reinstated. If the review reveals a lower risk, there are several options.   If the condition is considered temporary or minor, they might not take any action; or possibly require a written, vision and a road test at a DriveTest centre, or be asked for more medical information; or, another possibility is a functional assessment at an approved assessment centre.

There are more than 70 Functional Assessment Centres spread throughout the province of Ontario. Although they are approved by the Ministry, they are independently operated. They are located in hospitals, rehab centres, and some in private clinics. Although a few use the DriveABLE touch-screen tool, drivers are not required to take that testing, and can choose a centre in a location that suits them and with a program with which they feel comfortable.   The assessment includes both medical and on-road evaluation, by an occupational therapist and a qualified driving instructor. http://www.mto.gov.on.ca/english/safety/functional-assessment-centres.shtml

If the report – which is sent to the ministry – requires you to take remedial lessons, you will receive a temporary licence (only to be used while taking the lessons), as long as there are no other issues on file. If the Medical Advisory Panel determines you are not fit to drive due to medical reasons, you can appeal to the Licence Appeal Tribunal, which can confirm, modify or set aside the decision. Even that body’s decision in medical cases can be appealed to the Superior Court of Justice, but that has to be done within thirty days from the date of the decision. There is a fee of $ 100, which is payable to the Licence Appeal Tribunal. http://www.sse.gov.on.ca/lat/english/Pages/default.aspx

3. There are medical conditions which could prevent someone from driving at one stage, but after undergoing necessary rehabilitative treatment, after which the driver’s capacity can be re-examined. There are also rehabilitation centres where cars can be modified to make up for a disability. For example, www.nmeda.com 1-866-948-8341 and www.infinitec.org/live/driving/dealers.htm (1-877-369-4867) offering extensive information on the subject. The website of the March of Dimes Canada also has useful information and links to home and vehicle modification in Canada. You can find the information here.

For information on regulations regarding medical conditions which might affect driving in other provinces, procedures followed and other information, please see: