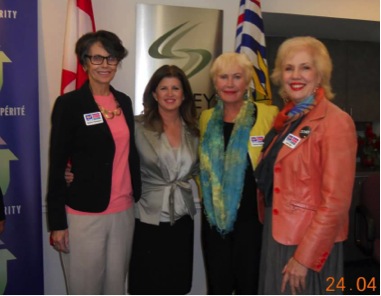 Minister Rona Ambrose met with the Surrey Board of Trade in British Columbia on April 23, 2015, to meet with small businesses in the region, and CARP’s White Rock-Surrey Chapter was also in attendance to voice CARP’s position and response to the federal budget that was tabled earlier in the week.

At the meeting, April Lewis, CARP’s BC Representative, and Ramona Kaptyn, Chair of CARP’s White Rock-Surrey Chapter, commended the Minister on the federal budget for the changes to the RRIF withdrawal rules and the doubling of the TFSA room. The two measures are important to help people have more control over their retirement savings, but on their own, they are not enough. April and Ramona reminded the Minister that there are 600,000 seniors living in poverty in Canada, representing 1 in 4 seniors, and the federal government must take action to increase the GIS, return the eligibility of OAS back to 65, and provide supports for low-income seniors, particularly single seniors.

April and Ramona also spoke on the importance of moving forward on the issue of physician-assisted death, which the Supreme Court of Canada ruled as a right in February 2015 and gave 12 months to allow for legislation to be drafted. When asked when Canadians can expect the legislation, the Minister merely indicated that discussions are currently taking place.

CARP’s Chapters across the country continue to play an important role to apply pressures on the ground, adding to the voice and weight of CARP.