The Middle-Age Guide to Growing Up: Tripping The Light Fantastic - CARP
Join Donate Sign In 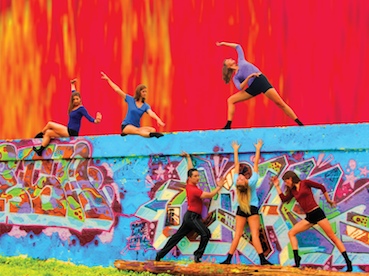 I’m a Boomer, born when homosexuality was still outlawed in Britain, and still prosecuted. In retrospect, this seems like a fairly self-defeating policy when you think how many eminent Britons are or were gay. Anyway, that’s all in the past, and Britain knights its gay heroes now instead of jailing them, as Sir Elton John and Sir Ian McKellen will proudly tell you.

Readers of this space will know I have been an actor most of my adult life and, as such, have always counted gay people among my friends, family and acquaintances. My interactions with gay people go well beyond that, however. My father was an organist, and he used to joke he was the only heterosexual organist on the East Coast. He had a lot of musical friends, organists, choirmasters, ecclesiastical hangers-on, would-be clergy and the like. Some, if not all of them, were gay, and my father had no fear of bringing his friends home for dinner to meet his five children. This was in the early 1960s, mind you, when homosexuality, if it was even discussed or acknowledged, was not accepted.

One old queen, an organist named Ted, loved to play with us kids in the pool in the summer. He was a lot of fun. I remember my father asking me one evening, after a pool party, “How do you like Ted?” I said (I was about 5) “He’s very nice, just a bit queer”. This was a word I had just learned, and thought it meant “a little odd” (which it does), and I couldn’t understand why my father and the other adults all burst out laughing. I didn’t get the joke for years.

When I was in my mid-twenties, and footloose and fancy-free, Dad arranged a job for me one summer helping his number one salesman tune organs across the southern United States (dad was also vice president of sales for a famous pipe organ maker) . This was a lucrative sideline to the organ business, because handmade pipe organs need to be exhaustively hand tuned every few years, and it is a job only experts can do, as it involves shaping the reeds of the pipes and adjusting their volumes. Each organ might take 2 or 3 days to tune.

Michael, dad’s ace salesman, was a big, tall, overweight, blubbery gay man with a thick southern accent, a mordant sense of humour and the courtly graces of a bygone era. He was also married, to a sweet and completely unaware woman named Janis who had no idea he wasn’t straight. How this was possible could only be a product of her determined lack of insight, and the proprieties of domestic life in the American south.

Michael and Janis had a beautiful brick home in a suburb of Charlotte, exquisitely furnished and with a tuned hi-fidelity listening room for Michael’s expensive stereo. They belonged to the local Episcopal church (everyone in the south belongs to a church, if you don’t you might as well not exist). They were wealthy pillars of the community, due to the large commissions possible in the pipe organ business.

After a day or two in Charlotte, filling up on Janis’ excellent fried chicken, biscuits and cream gravy, we took off in the station wagon with the folding ladders and our luggage, destination, the deep south. We were going to swing south through western Georgia, across the line into Alabama, into Mississippi then back up through Tennessee and Kentucky. Barbecue, fried chicken, Royal Crown Cola, hush puppies, all the glorious southern food I could eat was waiting for me.

We’d share a motel room, and I’d watch TV, entranced by the local commercials I’d never seen before, and the thick accents of the announcers. Mike would often leave, only to get back late. He carried a little black booklet with him, privately printed, which listed every gay bar in every small town in the south. I realized this is how gay men in the south must survive, by subterfuge and camouflage. There were towns of a few hundred people in his book, in the middle of nowhere, and there would be local gay gathering spot, sometimes a bar, sometimes just a barber shop or a room behind a garage or a pool hall. But they were there, in every small town, no matter how benighted and backwards.

Michael never betrayed my trust nor crossed the line in his behaviour with me. He was delighted, I think, to have a companion with whom he could openly flaunt his life and humour. He taught me al lot about respect for people’s different choices and tolerance for other lives which came in handy when my youngest sister came out a few years later.

Unfortunately, Mike liked his trade rough, and never shied away from encounters with strangers. That kind of behaviour soon became fatal, and Michael succumbed to the AIDS epidemic in the mid 80s. I will always be glad I knew him, with his deep laugh and his wicked sense of humour, and I will always remember our summer tour through the deeply fabulous south.