The Middle-Aged Guide to Growing Up: What’s Cooking? - CARP
Join Donate Sign In 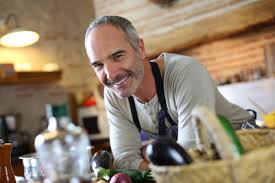 It’s not that I can’t cook, I can, very well by comparison with some men my age, but I’m lazy. If it involves precise measurement, timing, greasing and prepping pans and especially baking, I’m not interested.

One of my favourite dishes (and a favourite among those who try it) requires a pot of water and a bowl. Spaghetti (or in my case, Linguine) Carbonara was invented when allied troops were bivouacked with Italian country people during the war. They would give their ration of eggs and bacon to their hosts for breakfast, and were met with blank stares. Eventually, an enterprising Nonna boiled noodles, stirred in the eggs and crackled the bacon over it.

My version skips the bacon. Boil a pot of pasta. Mix in a bowl: 2 eggs, a bunch of ground Parmesan cheese, some heavy cream, a good dash of gin or vodka, a little hot sauce, salt, pepper and garlic flakes and beat until thick and smooth. Then chiffonade some basil and chop a tomato finely and add them.

Strain the pasta and hold hot, while you melt a good two or three tablespoons of butter in the warm pot on a low flame. Dump the pasta back in, coating it with butter, then dump the contents of the mixing bowl in. Tong vigourously to coat the hot pasta, and to allow it to cook the egg mixture. In three minutes, it’s done, and it’s fabulous.

My chili is pretty spectacular, but everyone has a chili recipe, so I won’t bore you with it. I once threw a party that specified everyone wear white, and served nothing but chili and sangria. Cruel, really.

I do have what I call my “pants off” meal, when you have to impress a date on short notice, with no skill. Start with the fresh linguine, the green stuff that is soft when you buy it. Get a can of crabmeat, a small jar of mayonnaise, and a can of Campbell’s Cream of Mushroom soup. Top it off with a ripe avocado.

Boil the pasta briefly while you cook the Cream of Mushroom soup (without the added water or cream). It will be the consistency of a nice mushroom cream sauce for the pasta. Slice the avocado in half, mix the crab meat with a little mayo and fill each half. Arrange on two plates and the rest is up to you.

Then there’s the Breakfast of Champions. Fry up six rashers of bacon, flip them and just as the other side is getting done, slice a fat onion, and drop a few big onion rounds in the pan. Break three eggs into the onion rounds, to give them shape. Drape three or four slices of cheddar across the tops of the eggs, splash hot sauce on top, and put a lid on the frying pan to finish the top of the eggs. This breakfast will set you up for a full day’s work or send you back to bed.

The proper implements aren’t hard; a chef’s knife with an 8 to 10 inch blade, if sharp, will do most of the work described above except slicing bread, for which you need a serrated Ginsu from the supermarket. I prefer cast iron pans to more modern ones. You don’t wash them, you scrub them out with oil and salt to keep up their finish. One Teflon fry pan is necessary for scrambling eggs (done very slowly on a very low heat for maximum creaminess). One pasta pot, obviously, which will double as a soup pot, although you need two for the “pants off” meal. And tongs. Asparagus, corn, salad, pasta, all require tongs.

It isn’t necessary to be a foodie to cook well and graciously, and you don’t have to measure anything. Most proportions are pretty obvious. You just have to know how to sautée, tong, whip and fold, things they don’t teach on Masterchef, but which you’ll figure out once you try them once or twice.

The best thing I ever cooked myself was a trout I had just caught. The pan was in the fire on the beach, the butter was crackling and the fish went from the lake to the pan, with a quick stop for filleting. It was sensational, and simple.