Carol's Corner: Community is Where you Make It - CARP
Join Donate Sign In 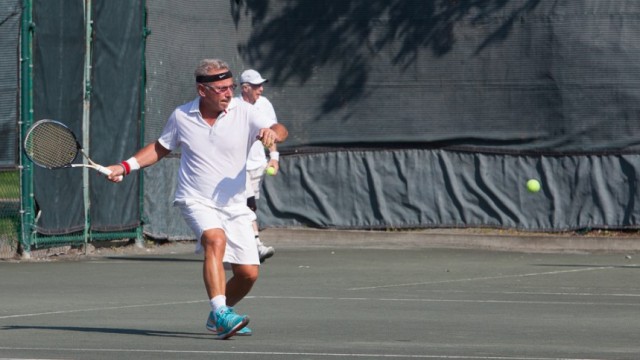 The tennis club where I attempt to persuade that little yellow ball to skim over the net and land approximately in the right place, is a community in its own right. Members range from young enough to be my grandchildren, to a bunch of my peers hovering in and around the 80-year mark. I thought – considering our longevity – we were a pretty impressive group – and then one day I played against Roy Shinobu. I have no recollection who won, but then we were playing doubles, so whatever happened I can claim only half the glory or am obliged to absorb only half the defeat.

By the time this story appears on your computer, Roy will have celebrated his 95th birthday, and still wielding a racquet with gusto.

“When I come on the court,” he says, “playing against younger players who don’t know me, I like to remind them not to be too hard on me, so that I can live to play another day.”

(This reminds me of another friend who used to arrive at the court complaining about her arthritis and then, in the words of her opponent, “knock our socks off”.)

In truth, Roy is a gentleman of the old school, but tennis is a competitive sport. Nevertheless, at the Bond Park (Toronto) community tennis club where we both play, Tuesday and Friday mornings are devoted to very sociable round robins – everybody has a chance to play regardless of official or unofficial ranking. It’s a community of its own.

Roy grew up in Vancouver, his parents having emigrated from japan in their teens. There were public parks close by with tennis courts and at the age of nine or ten Roy was so interested in giving it a try that his uncle – who knew nothing about tennis – decided to buy him a tennis racquet. Roy was delighted, until the present arrived. To this day Roy can’t even describe it, but it wasn’t like any tennis racquet he had ever seen. However, his father remedied the situation with a brand new one – made of wood, of course. (Yes, children, they were made of wood in those days…..).

Then, in 1941, after the attack on Pearl Harbour, in spite of the fact that Canadian Military authorities and the RCMP didn’t believe Japanese Canadians were a threat to national security – and the vast majority were Canadian citizens – the federal government used the War-Time Measures Act, to move the entire Japanese-Canadian community – 21,000 people – to detention camps along the Pacific Coast. Additionally, houses, farms, businesses and personal goods were confiscated, and homes boarded up.

Instrumental in their survival was the emphasis on the importance of “community” – the common denominator of all immigrant groups.   Roy’s father was one of many who combined their understanding of the physical and social needs of these uprooted families to help keep them functioning with a remarkable degree of stability until the end of the war. It wasn’t until 1949 that the civil rights of these Canadian citizens were restored and restrictions lifted.

Roy, with a degree from University of British Columbia, came east to study medicine at the University of Toronto. In 1949, fresh out of med school and ready to start his career as a family doctor, he first practiced in Carleton Place. Then, his instinctive search for “community” led him to the fledgling area which became Don Mills, in the throes of development between 1952 and 1965.

Industrialist E.P. Taylor had decided this was an ideal place to build a model town, based on five principles – a new idea in Canada. The first was the idea of neighbourhoods with a variety of housing; lots of pedestrian paths to separate walkers from vehicle traffic; modern architecture; creation of a green belt; and integration of industry and other types of businesses and services, so that residents of Don Mills could live and work in the same area.

Once again, Roy’s natural empathy for “community” kicked in. This was the place he wanted to live and wanted to work. As he explored the neighbourhood, he saw a sign on a house: Dr. Melvin Gooderham. He rang the doorbell, and when Dr. Gooderham opened the door, Roy asked if he needed an assistant. A short time later the deal was sealed with a hand-shake.

After several years of family practice Roy went back to U of T for a degree in psychiatry and continued to work in that field in North York. His secretary and receptionist was his wife, Maki – an ideal relationship. Then, in 1995, she began to show signs of Alzheimer’s disease. It was time for both to retire and search out programs which, they hoped, would sustain her health. Once Maki was enrolled three days a week in a Day Program at Providence Health Care, it was back to the tennis court for Roy. He had been a long-time member of the tennis club, but up until that time his playing time was pretty much “hit and miss” – which would pretty much describe anybody’s tennis played on sporadic basis. (Just like the piano – which Roy also plays – you have to practice.)

Suddenly tennis friends were commenting on his increasing prowess. With Maki cheering him on, Roy began to play competitively. In 2004 he was asked to play in the 80+category in the Tennis Canada National Seniors tournament, filling in for another player who was unable to compete. He not only made the cut but continued playing both singles and doubles with impressive results for the next four years. The highlights have been many. In October of 2005 he joined the Team of Four representing Canada at the International Tennis Federation Super Senior Championship held in Antalya, Turkey. “That was a wonderful experience,” he said. “I felt like I was in the Olympics!” And in 2007 he became the national singles champion for those 85 and older. Unfortunately, by 2008 the ranks in that category had thinned with only Roy and one other registered, and ranking was cancelled.

Still, Roy is out there playing tennis several times a week: in winter under one of the North York Tennis Association “bubbles”, and in the summer at Bond Park, right there in his neighbourhood. And he has no plans to retire. “Don Mills Tennis Club”, Roy explains, “is a community. I am so impressed with how well it fits in with the whole unique concept of Don Mills, as an ideal place to live. It’s a family place.   Maki was always welcome, sitting on the sidelines, enjoying the ambiance and the friendly contacts.   No matter what your level of ability is, it is a place where everyone truly feels they belong.”