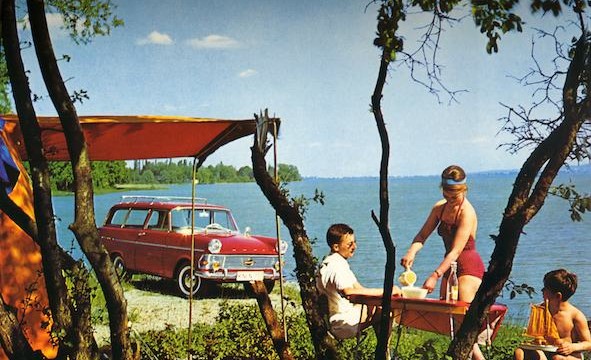 Now that you have stopped groaning, I bolster my case by quoting Alfred Hitchcock, who said “Puns are the highest form of literature.” And if you need further corroboration, I quote Jonathan Swift: “Punning is a talent which no man affects to despise but he that is without it.”

The kids and the grand-kids are back at school, and with the autumnal equinox around September 23, it’s time to stow the memories of summer. Although fall can be a glorious season, it’s probably time to pack up the camping equipment – if you should have any – but not the stories that go with your adventures, even if they were many long years ago, and everybody’s heard them a number of times. Re-telling, and time both allow you to embellish, on the principle that a good story improves with age. Like us. The kids may grimace, but the grandkids are willing listeners, particularly if the stories involve the misdemeanours of their parents.

If there are ‘real campers’ out there, I must admit that we would never make any of the television Real Live Action shows. We just wanted a movable cottage to take to the lake. Almost any lake. As to ‘adventures’, I will exercise due discretion, realizing that – unlike communication in the last century – anything written here can wind up on Youtube forever. (One of my granddaughters has already posted a ‘selfie’ she took with me, as we were driving to the train station just the other day. Luckily, I was not scowling and muttering obscenities at traffic or pot holes at the time.)

Way back in the ‘60s when we became campers, one of her first absolutely vital purchases was a Coleman lantern. According to the company’s blurb, “Coleman lanterns have been used to illuminate jungle landing strips. They made the trek to the South Pole with Admiral Byrd.”

This is inspiring. However, neither Admiral Byrd nor we were able to access specific instructions over the Internet, as to how to light a mantle in a propane lantern. The answer is “gingerly”. For those who have never done this, my advice is as follows: have several on hand to make up for all the ones you break; do not have more than one glass of wine before you attempt it as this operation requires not one, but two steady hands; check online for ‘how-to videos.’ For non-campers, the mantle is a little silky doo-dad you tie around a little pipe-like thing in your lantern, which you will access after removing the glass cover. Then you actually burn the mantle, carefully, and it turns into a white gossamer-ish entity which, if you so much as breathe on it, will disintegrate. Then you do it again. Then you go out and buy a battery lantern.

We did have fun camping, and perhaps some of you did, too. In our tenting days, with kids 1, 2 and 3, oftentimes one of them would invite a friend.   Camping in the Adirondacks required high-test sleeping bags, blankets, ski-socks ski underwear and hoodies. The outdoor loo was a distance away.   Middle of the night, a voice is heard: “Mum, I have to go the bathroom.” Mum digs herself out of her sleeping bag, unwraps kid, and before we go I ask friend, “Do you want to go, too?” “No, thanks.” she answers. “I’m fine.” Ten minutes later we return, and get kid re-installed. Then a small voice is heard, “Mrs. Libman? I think I have to go.”

(Note: Best Friend is all grown up now, with grandkids of her own. I don’t think they go camping, but if they did……)

One of our best trips was to Cape Cod, heading for Nickerson State Park in Orleans. Unfortunately, we arrived too late to check in, in total fog. This required finding a place to stay overnight, along with several hundred other people all searching for a hotel, motel, B & B, hovel, anything with a bed. We drove around and around, peering through the fog, until finally I spotted a sign: ROOM FOR RENT. We stopped. I ran up the path to the house, knocked on the door, and barged into the kitchen. Eight (or maybe it was ten) people were seated around the table, steaming, buttery corn cobs in hand. They stopped eating and stared. A woman approached me.

The deal made, we hauled in sleeping bags, parked two giggling kids on the floor, put the youngest on the bed who – sound asleep –kept rolling from side to side, while his Mum and Dad spent the entire night pushing him back and in the other direction.

It was still foggy in the morning. “Don’t worry,” our hostess reassured us. “It’ll burn off by noon.”

She was right, and we had a glorious week at Flax Pond. Dad even took Kid #3 deep sea fishing, neglecting to enter him into the “pool” for a prize that would go to whomever caught the biggest fish. After all, what six year-old can land the size of fish that roam around the Atlantic Ocean?   Of course, you know who won, except he didn’t…..

On the dock, knowing I hadn’t any idea how to gut and clean it, they had their catch done by an expert and brought the fish home in a plastic bag.   The event was immortalized on film, of course. I realize the photo doesn’t have the heroic dimension it deserves, but there he is, triumphantly holding up a plastic bag like he’d just won an Olympic event. And for several decades hence, he never missed an opportunity to remind his Dad about the prize he should have won.

Incidentally, the fish was delicious.