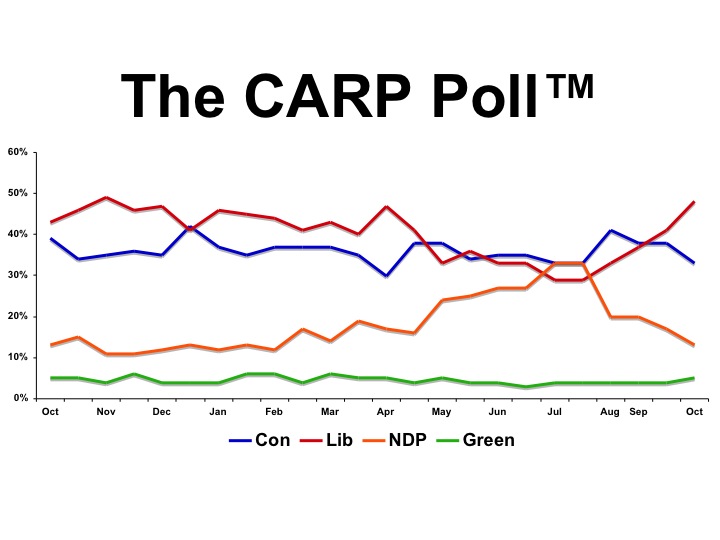 In a massive new poll from CARP taken by more than 12,000 respondents, members accurately predicted the results of the election. Conducted three days before the federal election, an astonishing 4-in-10 members had already voted in advance polls, and a further one half were certain to vote for a total of almost all CARP members who had voted already or were certain to vote.

The poll had the Liberals in the lead in voter preference, with a nine-point advantage over the Conservatives. The NDP, once favoured first by our members, fell to a distant third.

While there was a tie in preference for a Prime Minister between Justin Trudeau and Stephen Harper, Tom Mulcair didn’t compete on this measure with our members. These are also the results for the party with the best platform for older Canadians, where the Liberals and the Conservatives were tied and the NDP lagged.

When asked the most important issue in the campaign, the largest group cited “jobs and the economy”, but it is a maxim that the economy will always be cited first in this measure, and the important values are seen second and third, which in this case were “time for a change” and “decline of democracy”. When coupled with those who said the biggest issue is “ethics and transparency in government”, it added up to more than 4-in-10 for whom the biggest issue in the election was related to changing a government they no longer trust.