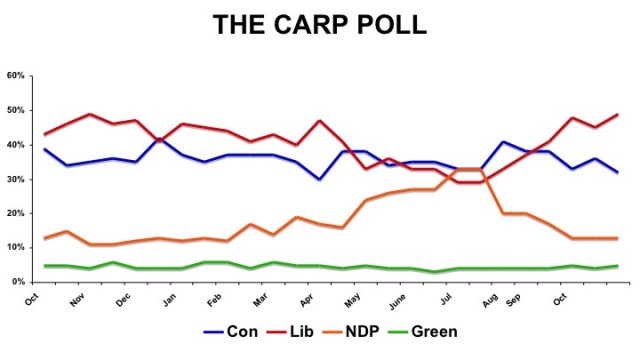 Voting is universal among CARP members, and half of them (more than in the general population) voted Liberal in the recent election. The NDP is favoured as the party of second choice, and most say they will never vote Conservative.

Close to half voted in advance polls and voting took, on average, just over 10 minutes. One fifth claim to have voted strategically instead of according to their consciences. As many as one quarter didn’t make their final decision until one week prior to the election. On the whole, members were surprised by the outcome to the election, but not extremely surprised.

The Liberal ad featuring Hazel McCallion was widely recalled, but few claim it influenced their vote. Public opinion polling was seen to have some more influence on members’ vote than the ad, but not much. It is presumed those relying on the public opinion polls are also those who voted strategically.

One quarter of members changed their minds on who to support at least once during the campaign and these, again, are likely to be strategic voters.

The issues that drove the vote were connected to change and ethics in government, both very negative for incumbent governments. The Liberals are widely seen to have run the best and fairest campaign, and the need for change was very important in motivating voters.

Click here for a link to the full poll report.