The Middle-Age Guide to Growing Up: A Four Hour Cruise - CARP
Join Donate Sign In 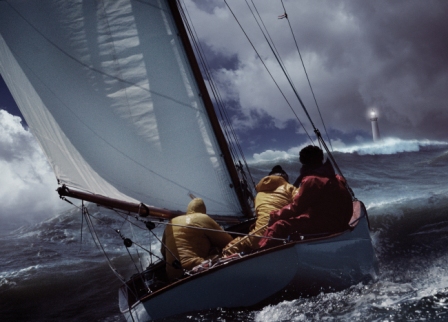 It was supposed to be a simple four hour cruise, Niagara-On-The-Lake to Toronto, a straight line, 27 nautical miles, course 325 degrees. My former crewman and first officer, Jamie, had, to everybody’s surprise, bought himself a boat identical to mine, a 36 foot Nauticat motor sailer hand built in Finland. She had been on the hard in Niagara for three or four years and had been losing her tone when he bought her. Sequoia, white hull, teak topsides, enclosed wheelhouse.

He spent considerable time and money trying to bring her up to spec, including a complete motor rebuild. These boats have Ford tractor engines, four cylinder 90 horsepower diesels with enough torque to pull stumps. Generally, they’re as dependable as an engine can be. Diesels don’t require electricity to run; as long as they have clean fuel and clean air, they’re pretty hard to stop.

All the required safety gear had been bought; PDFs, throwing lines, liferings, airhorn, flares. In addition to ship’s gear, Jamie’s entire life, and his Chihuahua, were packed on board. He had given up his apartment in Niagara, given all his furniture away and moved what was left of his belongings aboard the Sequoia. Every locker was full, with clothes, sleeping bags, boots, pans, dishes, tools. The deck was packed like a container ship with bales, bins and boxes containing, among other things, two “bubblers” to keep the ice from forming around the hull.

You see, Jamie was going to live on Sequoia all winter in Toronto Harbour as a “liveaboard”, and his boat was his new home. On deck, along with the bubblers, were fire extinguishers, recycling bins and a mountain bike. Sequoia sat about 4 inches deeper then her waterline showed.

After an intense week of breaking leases, moving furniture, rigging the boat, packing his life, installing the rebuilt motor, finishing multitudinous repair jobs on the fabric and trim of Sequoia, we were going to cross the lake to bring him to his new home in Toronto harbor. Not everything got done, including testing the VHF radio, and running in the engine.

The last tradesman stepped ashore one Wednesday morning in early November (the only window we had when the Lake was forecast to be calm, warm and sunny), we slipped the lines, engaged the bow thruster, slowly shifted into forward and ghosted out of our berth.

The mouth of the Niagara River is no fun. There are wicked eddies to starboard, and a sandbar to port. The waves are extremely choppy and confused where the current of the river meets the swells from the lake. And the fog. Impenetrable. Visibility was about 50 feet. The boat was pitching and rolling like a mechanical bull, emptying lockers one by one all over the cabin sole. The Chihuahua was dancing around the wheelhouse on her toenails, looking worried.

The chop settled some, but left us with a lot of movement. The fog hung in, sun shining down bright, but no visibility on the water. We were navigating by iPad, with a GPS chart app. It showed our location on the lake, our direction and our speed, but it didn’t show us any shipping in the area, and two lakers actually loomed out of the fog (at anchor) as we went out. Did I mention Jamie didn’t know how to turn the radar on?

I wasn’t really happy about the trip. The VHF radio powered up fine, but I couldn’t get anyone to respond to a radio check. We were varying the RPM of the motor every 20 minutes according to the run-in schedule, but three hours out the motor started making anomalous noises, a slight pulsing of the revs.

In ten minutes, the pulsing turned to knocking. We reduced revs to idle and the knocking subsided, then the motor went bang! And stopped dead. All my worst fears come true, everything I’d been dreading about this trip. Broken down in the middle of the lake in dense fog with no radio. The only things we had going for us was there was no wind and it was sunny (above the fog). It could have been driving rain in twenty knots of northwest wind and 4 foot swells.

After some futile examination of the oil-soaked motor, we shut up the engine compartment and set about getting a tow. I sent out a “pan pan pan” on the VHF (assistance needed) and also hailed Coast Guard Prescott with our approximate position. No reply. Jamie’s cell was dead by this time (he’d been shooting movies and talking with his girlfriend), but I still had 70% juice on mine.

I called a mechanically minded friend who had sailed with us and got him (we were about 8 miles south of Toronto at this point, although we couldn’t see the city). The call kept breaking up, but I made him understand we needed the number for the marine tow dispatch. He texted the number a few minutes later (texting takes less data and bandwidth than voice) and I called it.

They answered and said they’d dispatch a boat, who would call me. About 20 minutes later, the towboat driver called me. He was dropping his son off at school and would launch in half an hour, taking about half an hour to find us.

Jamie was disgusted, exhausted and disappointed by this time. We were rolling heavily in the slick, windless swells and lockers were banging and bits of his life rolling around the cabin. I said “take a nap, there’s nothing we can do now”. He went to bed below with the dog.

I was sitting on the quarterdeck, smoking a cigarette when I heard a low rumble. A huge shape loomed out of the fog off our starboard beam, moving towards us. It looked like a Coast Guard cutter, but the closer it got in the fog, the smaller it got until, by the time I could see it clearly, it was just the Marine Police Zodiac launch, come to find us.

Apparently, the “pan pan pan” and the hail I’d sent to Coast Guard Prescott had been heard loud and clear, I just couldn’t receive their replies on our broken radio. Prescott had been hailing me for an hour with no response, so had sent the police to our last known position. They were very relieved to find us and learn a tow was on the way. It only then occurred to us that our calls had raised the emergency network around the lake and there were probably dozens of boats looking out for us. I’m just glad the Police didn’t ticket us for not having a working VHF.

The Police launch stayed until the towboat arrived. He had to call from three miles away (where we’d been originally before drifting) and I sent him the 5 digit GPS coordinates from the navigation software (on my iPhone, the iPad now being dead). We were finally put on the towline and we started in to Toronto at 5 knots, bucking and whipping around in his wake.

By the time we arrived, at nightfall, the iPad was dead, Jamie’s iPhone was dead, my iPhone charger was empty and I had about 30% left on my iPhone. No radio. No back-up radio. Oh, and no radar reflector, and we broke down in the meeting point of the three main shipping lanes on the lake.

The whole thing was an exercise in potentially fatally poor planning. Jamie’s POV was “I got 90% of what I had to do done, and the boat made it 90% of the way there”. But 90% is never good enough at sea. Or on a Great Lake. 90% gets you in big trouble, not home. We were very lucky. Any number of cascading misfortunes could have made things much worse. A ship coming out of the fog. Dead cell phones. Bad weather. I’m not crossing the lake again, and I’m buying the C-Tow towing package for boats.