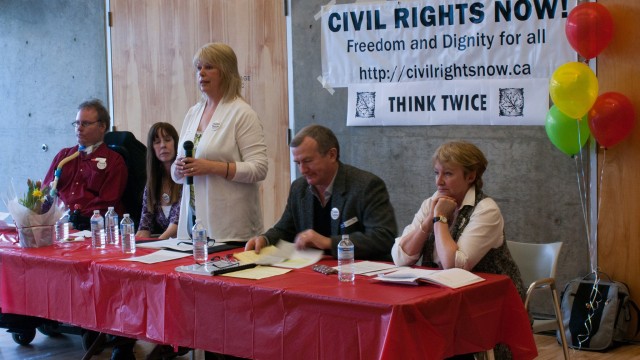 The British Columbians for Civil Rights Now! Society (“CRN”) says we face a significant and growing health-care problem in our communities, one which is of particular importance to CARP members and others who are entering their senior years. Specifically, disabled residents of our province are vulnerable to a provision of community or institutional care that falls below a generally acceptable standard, a situation that does not allow them to live with confidence in their safety, nor with freedom and dignity. Currently, no legislation exists which guarantees an appropriate standard of care.
The experience of our executive director, Paul Caune, illustrates the point: He was moved, first, from a Group Home on the North Shore, his long-time home, to Lions’ Gate Hospital and, then, against his will, to an institutional care facility in south-eastern Vancouver, far from his family and other community supports. Whether it is being removed from their home against their will, subjected to over-medication, left unattended or other unacceptable and potentially dangerous indignities, documented in the news media with depressing regularity, an increasing number of British Columbians living with a disability, more and more of whom are seniors, face situations that demand a remedy.

Our organization, CRN, an all-volunteer, BC-registered, not-for-profit society, proposes one. Our ultimate objective is to see the provincial government pass a British Columbians with Disabilities Act, similar in design and scope to the US federal Americans with Disabilities Act, now celebrating its 25th anniversary. In the short term, we are seeking passage of two pieces of provincial legislation: The Community Care (Direct Payment) Act and the Civil Rights of Persons in Community Care Act. To learn more about us and our proposal, see: www.civilrightsnow.ca.
The Community Care (Direct Payment) Act is modeled on legislation that has been in effect in the United Kingdom since 1996, where it has not only proven to be extremely beneficial for persons living with a disability but, by reducing unnecessary bureaucratic intermediaries, has over time saved taxpayers a considerable amount of money. In short, the Act provides that once a person has been found eligible for taxpayer-supported home-care, the monies required to fund an array of in-home services are no longer to be controlled by public service case managers and the like. Instead, at the discretion of the disabled person involved, these monies are to be controlled either by themselves or by their designated representative. This one simple change gives the disabled person concerned much greater control over their home environment, permitting them to live with much greater dignity, freedom and sense of security, something everyone desires and which most people both have and take for granted.
The Civil Rights of Persons in Community Care Act is modeled on legislation that has been in effect in the United States since the early 1990s, where it has permitted persons living in State-controlled institutions to anonymously complain about unacceptable living conditions and, where the complaint is found to have merit, the federal Justice Department takes action to remedy the situation. During meetings held over the past few years with a great many British Columbians living with a disability, we discovered that one of the biggest concerns they have is fear of retribution from their in-home service providers should a complaint be lodged about job performance. Our proposed law would provide for anonymous complaints to be made to an independent agency, operating under the general direction of the BC Attorney General, which would permit an investigation and, where warranted, action to require the standard of care of the person or people concerned be raised to an acceptable level in the eyes of the agency or, if necessary, the courts.

Why ought our fellow CARP members care about and get behind this initiative? Apart from the moral imperative of supporting legislative change which will greatly improve the lives of those among us presently living with disabilities (and save tax-dollars), it is in our enlightened self-interest. For, as former Vancouver mayor Sam Sullivan has rightly observed, “We are all only temporarily able-bodied.” Indeed, recent actuarial figures show that a fifty year-old Canadian man has a 36 per cent chance of either dying or contracting a life-threatening and disabling disease by age seventy. For a Canadian woman of the same age, the chances are a less arresting but not insignificant 22 per cent. Wouldn’t it be best to see the CRN proposal passed into law before statistics catch up with you, a family member or a close friend?