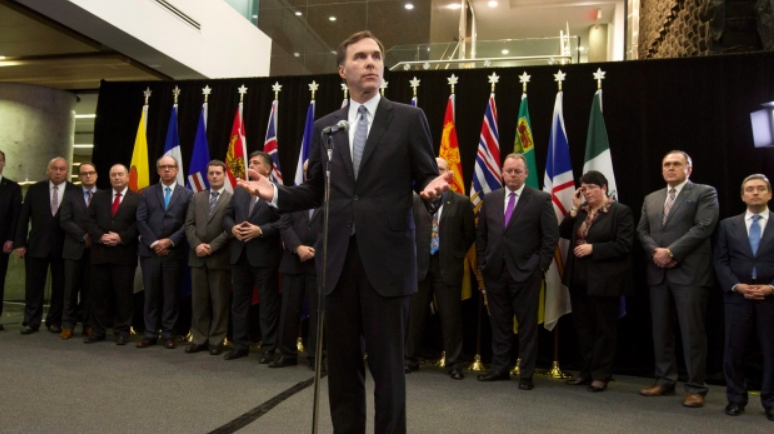 Provincial finance ministers say the federal government should be in no rush to expand the Canada Pension Plan and instead make infrastructure and health spending the top economic priorities.

In Ottawa for a summit hosted by federal Finance Minister Bill Morneau, it seemed unlikely a quick agreement would be reached on the pension issue as key ministers urged the government to take time to study all options.

British Columbia Finance Minister Mike de Jong warned that adding a financial burden to employers and employees while the economy remains fragile could have a “negative economic impact.”

“We have to be cautious, but at the same time I don’t think we should shy away from the conversation,” he said.

Saskatchewan Finance Minister Kevin Doherty said the federal government and provincial partners should hold off to see how other “products” such as the Tax Free Savings Account (TFSA) and pooled pension funds work before embarking on a “broad-based solution,” like expanding CPP.

“We’re not saying never, we’re just saying right now is not the right time and we’re not prepared to move on that at this time,” he said.

Doherty said infrastructure spending to improve highways and water systems is the most pressing issue on his plate for the meeting.

Most premiers who spoke to reporters Monday agreed that infrastructure spending is the top priority, including Alberta Finance Minister Joe Ceci. He said tackling the infrastructure “deficit” by building roads, schools, hospitals and bridges is the best way to buoy his province’s economy in this “challenging time.”

“Infrastructure spending will critically help the depressed economy that we have now. It will put Albertans back to work, it will leverage up the funds that municipalities wish to spend, that we wish to spend across the province,” he said.

The Liberal government has promised $125 billion in infrastructure spending.

As for expanding the CPP, Ceci thinks the best route is to send officials away to study options and come back with recommendations to build consensus.

Provincial and territorial finance ministers arrived Sunday night and attended a dinner hosted by Morneau. Meetings will continue through the day Monday, with a closing news conference scheduled for 3:30 p.m.

The federal Liberals promised to expand the CPP during the election campaign, but needs to have at least seven provinces on board representing two-thirds of the Canadian population to move on the reforms.

Quebec Finance Minister Carlos Leitao agreed there must be more study and analysis to determine next steps, but he believes a targeted system geared to income levels is likely the way to go.

“We don’t think it’s necessary to have broadly based increases on CPP, but some targeted increases, there could be a strong case to be made,” he said.

Ontario Finance Minister Charles Sousa said the theme of the meeting is “collaboration” and laying the groundwork for further discussions around “principles.”

“It’s collaborating with the provinces around retirement security, but it’s also about trying to formulate how we can best stimulate economic growth,” he said.

Newfoundland and Labrador Finance Minister Cathy Bennett, who has only been on the job one week, and New Brunswick’s Roger Melanson said infrastructure and health transfers are top priorities. While not opposed to CPP changes, they both called for more dialogue and more time on the issue during this period of economic volatility.

CARP, an advocacy association for older and retired Canadians, said Canadians support a CPP increase “by wide margins” and urged the provincial and territorial ministers not to continue on the path of “political foot dragging.”

“All this posturing is really getting old. The federal and Ontario elections were fought and won on this as a major part of the platform,” said CARP executive vice-president Susan Eng in a news release. “It is well past time to act on ensuring that all Canadians can save adequately for their own retirement. Even if they agree today, we still have to wait three years for change to happen — plenty of time for the provinces to see if their arguments hold any water.”