Finance ministers will not move CPP reform forward. CARP members are outraged – all Canadians should be. - CARP
Join Donate Sign In 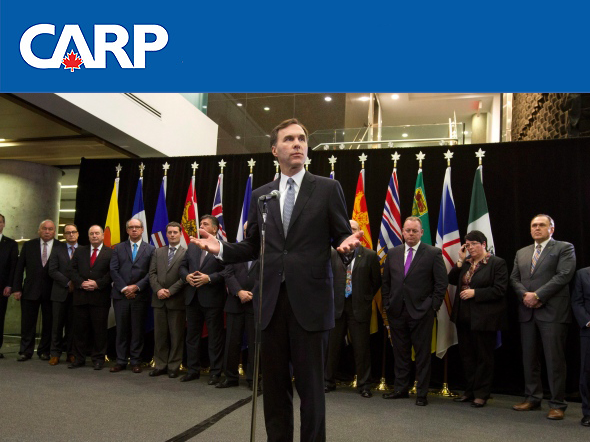 On Monday, Canada’s federal, provincial, and territorial finance ministers announced they would take no action on enhancing the Canada Pension Plan (CPP) after their weekend summit in Ottawa. Instead, they said they would consider options in the upcoming year, including to “do nothing.”

The news was a profound disappointment to CARP members. More than 3,000 CARP members responded last night to our instant poll, and 84% of respondents were outraged, angry, or upset at the ministers’ inaction. 87% of respondents said that, in failing to act on expanding the CPP, the financial leadership of the country was not representing Canadians well.

Federal Finance Minister Bill Morneau explicitly said that doing nothing about CPP reform is an option. Such inaction, especially in the face of the wholehearted support Canadians gave to those who ran on pension reform in the recent Ontario and federal elections, is the reason Canadians have come to lose their faith in politicians from all parties.

Seventy percent of CARP poll respondents attributed inaction on CPP reform to  lack of political will on the part of finance ministers, and 66% warned that ministers’ failure to act on the CPP will be a factor in Manitoba and Saskatchewan’s upcoming elections and by extension any future election.

CARP members have been clear about the need to act to help the next generation of Canadians save for their retirement. They made it clear during both the Ontario and federal elections. The political mandate was clear, and secured action from Ontario’s government and an election promise from the federal Liberals.

All the usual economic arguments have been made. The CPP increase has been debated, researched and virtually implemented [ORPP] for the last several years. Various models have already been canvassed.

Certainly, CARP members surveyed have consistently supported an increase to the CPP, with mandatory employer contributions and a defined benefit.

The last time a CPP increase was considered, at the FTP Finance Ministers’ meeting in December 2013, there was said to be a consensus among the premiers before Canada’s then-junior Minister of Finance took the issue off the table. The premiers were enraged, and Ontario premier Kathleen Wynne was prompted to propose the ORPP for Ontario residents only. While CARP members support the ORPP, they would prefer a national plan that would be portable and universally accessible.

This time, even the media got into the act to challenge the finance ministers at their news conference as to what was new in the economic climate that required such inaction. Our news releases received prompt attention. It is clear that ministers cannot just slip away without bringing this file forward.

It is well past time to act on ensuring that all Canadians can save adequately for their own retirement. Even if the ministers had agreed this weekend, we would still have had to wait three years for change to happen – plenty of time for the provinces to see if their arguments hold any water.

All the political foot dragging to date has had a silver lining. Canadians now know what’s at stake, and like CARP members, support a CPP increase by wide margins.

The finance officials have all the facts and analyses at hand. The implementation details are not mysterious. All that is missing is political will.

That’s something that CARP members can remind their MPs and MLAs of between elections, as well as during elections. Federal, provincial, and territorial finance ministers should get back to the table and start working on a better retirement future for Canadians.