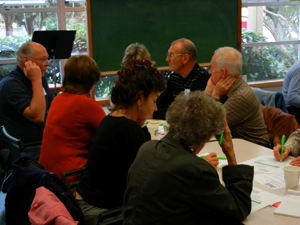 Shannon Calvert is having a few folks over to her north London home for coffee, cake and a chat.

No, it’s not the setup for a murder mystery or morbid musings by a cult in black hoods and cloaks.

Calvert says the Death Cafes can be positive, eye-opening experiences.

“An awareness of dying changes how I am going to live my life,” she said.

Calvert has already held one Death Cafe at her home, a gathering in November that drew eight people, and plans to hold another Monday.

She’s also hosted a viewing of A Will for the Woods, a documentary about the green burial movement.

Death Cafes aren’t a grief-support group, but some people at Calvert’s first session had suffered a family loss, she said. Others were looking ahead to plan their own funerals and how friends and families would be affected,

Death’s public profile in Canada has risen since the Supreme Court last year struck down the nation’s century-old law banning assisted suicide and gave the government until February to craft a new law.

But Death Cafes pre-date that twist, driven partly by the post-Second World War generation that is aging itself and, often, caring for older parents at the same time.

“We are starting to realize we have choice and, as baby boomers get older, we know this is something we have to think about,” said Calvert, who is in her mid-50s.

The group at the first Death Cafe was all female, but at least one male will be at the next event.

The first Death Cafe was held in London, England in 2011. Since then, the concept has spread across Europe and North America, with thousands of Death Cafes held in public and private settings.

One event last fall was held at a cafe and bakery in Woodstock.

Issues such as long-term and palliative care, and assisted suicide, have focused more attention now on end-of-life planning, said Susan Eng, executive vice-president of CARP (the Canadian Association of Retired Persons), many of whose 60 chapters have held Death Cafes.

“We encourage it — we have to get talking about it,” said Eng.

While CARP was initially concerned it might offend its members by polling them on topics surrounding death, Eng said she was surprised to find today’s seniors don’t consider death a taboo subject to be avoided and want to face their final days with appropriate care and planning.

David Foot, an author and demographer at the University of Toronto, widely known for his work following the baby boom, said boomers have some good years left, but time is running out for their parents.

“Baby boomers are dealing with death a lot more these days because their parents are in their 80s, so that may be sparking this movement (Death Cafes),” he said.

“People question more and want more control all over all aspects of their lives, including the exit.”

“People question more and want more control all over all aspects of their lives, including the exit,” added Eng.

If the London Death Cafes grow in popularity, Calvert says they may outgrow her home and be moved to a public venue.

Calvert laughs a lot and says she’s a cheerful person who is “totally into life.”

But she said talking openly about the ultimate fate can be an uplifting experience.

“Our world would be different if we had more awareness of death,” she said. “The conversation builds — it’s quite beautiful.”