On March 22, 2016, the newly elected federal government will release its first budget.

CARP is calling on Prime Minister Justin Trudeau to take action on his election promises made at CARP headquarters during the election campaign; such as his promise to increase the GIS (Guaranteed Income Supplement) for low-income seniors, introduce a new seniors’ price index for OAS and GIS recipients, invest $3 billion in home and community care and extend caregiver supports.

Anticipation is high among CARP members. You expect the government to fulfill its election promises made to seniors in the upcoming budget. Help us keep the government’s feet to the fire!

Let the government know that Canadians will keep them accountable.
Add your voice to CARP’s “Feet to the Fire” campaign by clicking here. 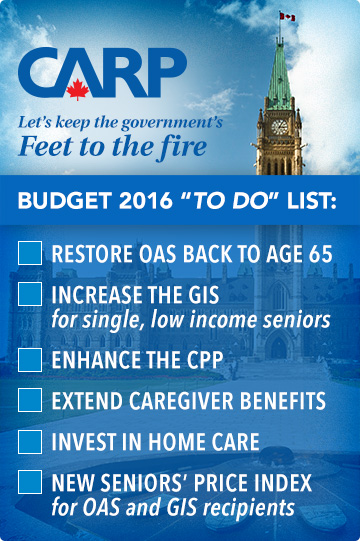