Whose life is it anyway? (and whose death?) - CARP
Join Donate Sign In 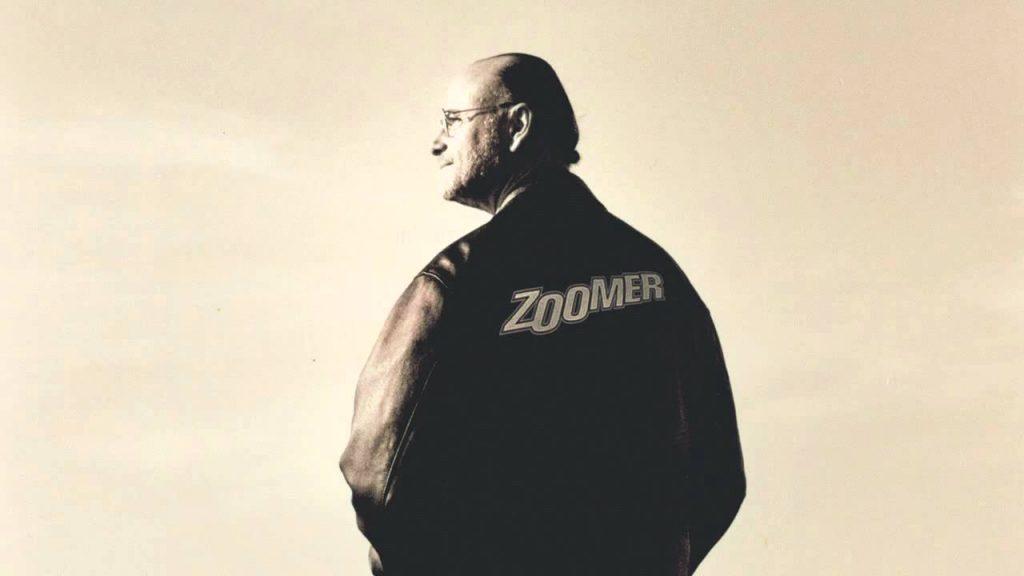 When I first mapped out and embarked on the Zoomer Philosophy, I thought it would consist of 10 chapters or so; and that the last chapter, on the right of people to control the end of their own lives without interference from others, would be the most difficult and controversial. I was wrong on both counts. We’re on the brink of our 30th chapter with no end in sight, and the one I was so leery of writing turns out to be not that controversial at all. A recent CARP national survey; whose results were somewhat unexpected and, for me, tremendously heartening, asked the question “Do you support the idea of physician-assisted suicide for those who are terminally ill or at the end of their lives?” Seventy-one per cent of members answered yes; 84 per cent of non-CARP respondents in Quebec and 80 per cent of non-CARP in the ROC answered yes to the same question in other recent polls, making for a loose average Canadian affirmative response of about 78 per cent. Considering that assisted suicide is probably the hottest button in the end-­of-life conversation, 78 per cent seems closer to unanimity than controversy.

Where the subject of assisted suicide is still controversial is in the institutional sphere, where lawmakers are subject to enormous pressures from many different directions. This leads to the question that lies at the heart of this chapter: if we live in a democracy, where we elect by majority rule, how is it that a policy criminalizing assisted suicide can be sustained in the face of overwhelming public opinion to the contrary? Who are these “people” – governments, religions, self-appointed moral groups, agents of paternalism everywhere – to say that  they know what is best for me and for us?

Assisted suicide is clearly defined by a statute called the Washington Death With Dignity Act, passed in 2009 in Washington state – one of the few jurisdictions where the option is legal. The Act states: “A patient must be diagnosed as having less than six months to live, be of sound mind, make a request orally and in writing, have it approved by two different doctors, then wait 15 days and make the request again. A doctor may [then] prescribe a lethal dose but may not administer it.” In other words, assisted suicide is not what many of its opponents assert: it is not mercy killing or euthanasia.

It is the proactive and “official” choice of only the person whose life and death is involved, a personal choice to end a life that has become intolerable for reasons of pain or in­ dignity or what has come to be known as  the  “locked-in”  syndrome,  with help if necessary. It is what a now­ celebrated British citizen named Tony Nicklinson fought for after suffering a devastating stroke that left him paralyzed from the neck down. Nicklinson, who could not physically end his own life, was petitioning the British government for the right to have someone help him do it when he felt it was time. This past August, the Supreme Court of the United Kingdom denied his petition. Nicklinson was so distraught, he refused all food, contracted pneumonia and died six days after the decision was rendered.

The remedy that could  have saved Tony Nicklinson, both in terms of suffering and time on this earth, is illegal in Canada as well, punishable by up to 14 years in prison. Suicide itself was decriminalized in 1972, but the test case for physician-assisted suicide was that of Sue Rodriguez in 1993. Rodriguez, a British Columbia resident suffering from ALS, argued that she had a legal right to what every able Canadian had, namely the right to choose if and when to end her own life (and her ordeal). The Supreme Court of Canada in its wisdom decided 5-4 that she didn’t. However, 20  years later, a chink of legal light opened this past August when Gloria Taylor, a terminal cancer patient also in B.C., was granted   a  constitutional   exemption to  receive a lethal  prescription  with physician assistance, by B.C. Supreme Court Justice Lynn Smith, who also ruled that the federal law banning assisted suicide was unconstitutional. The Attorney General of Canada appealed the decision; the B.C. Court of Appeals denied the appeal; so the case is poised to go to the Supreme Court of Canada.

The argument for assisted suicide is well stated in the comments of Justice Jo-Ann Prowse of the B.C. Appeals Court. Gloria Taylor, she said, had “fought so courageously” to claim her right to end her life and that she shouldn’t be required to “sacrifice her right to a concept of greater good.” Exactly! What maddens me about the “other side” in this issue is that the naysayers are people not in a dire situation, making decisions for people who are. That their motives may be religious or philosophical doesn’t negate the fact that they are imposing their views on people who are in agony. My response to people opposed to assisted suicide? Fine, you don’t want to do it yourself, don’t do it! You’re a doctor who’d prefer not to assist; don’t assist. But that you should  have the power that the Supreme Court had over Sue Rodriguez,  whose  every  living  moment  was impossible for anyone not similarly afflicted to  comprehend,  is just plain wrong.

Another part of the anti-assisted suicide argument that I find unconvincing is the tendency of the other side to lay out various imagined scenarios for “abuse.” Nasty kids will go after a frail parent to get money. Handicapped people will be disposed of as inconvenient. But this line of argument collapses for two reasons: first, it’s aimed at mercy killing, not assisted suicide; second, in the name of the small statistical likelihood of abuse, the high moralists would condemn vastly larger numbers to suffer. In every area of law involving risk – banking, driving, airplane travel, the internet – there are potential risks and abuses. Does this mean we should go everywhere on foot or use Morse code instead of email? 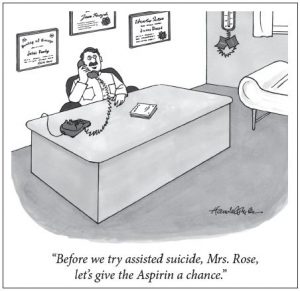 Now this “moral” impulse has landed on our demographic like a sledgehammer. As the greying of our society accelerates, the issue of gaining control over the end of our own lives must come quickly to the fore. And I believe that precisely because we come into this world without consent, we must have that last measure of control as to when to end it, reliably and painlessly, should we need to do so.

It is hard for most of us to think about dying at all. Another recent poll revealed that the majority of people over 50 have made no specific arrangements or plans for either their end of life or their death. One notable exception: doctors. Only 29 per cent of Americans, for instance, currently have a living will; more than 70 per cent of doctors do. Why? In a fascinating article called “How Doctors Die: It’s Not Like the Rest of Us, But It Should Be,” (which appeared last winter on zocalopublicsquare.org and was previously discussed in Libby Znaimer’s Zoomer Report) Ken Murray, M.D., a clinical assistant professor of family medicine at USC, revealed that most doctors are adamantly opposed to having the same heroic measures they’re routinely asked to perform daily for other people used on themselves. In certain cases, this includes chemotherapy, radiation, even surgical treatment. Knowing how tortuous the end of life can be if extended unreasonably, doctors prefer to “go gently” – even to the extent of having “No Code” tattooed on their bodies (to tell other physicians not to perform CPR on them). “I cannot count the number of times,” Murray writes, “fellow physicians have told me in words that vary only slightly, ‘Promise me, if you find me like this, that you’ll kill me.’ ” Doctors do this, Murray says, so that they can stay “fairly serene when faced with death themselves.” The reassurance comforts them.

One of the most sensational objections to assisted suicide is that, if it’s legalized, there will be hordes of people doing away with themselves. But just the opposite may be true. Tony Nicklinson often noted during his failed campaign that just having the option of an assisted and painless death might have actually kept him going longer. Justice Prowse, in her decision upholding Gloria Taylor’s right, said that if Taylor didn’t have that right, she would be subject to “the loss of the peace of mind and solace now available to her as a result of the exemption, in knowing that if living becomes unbearable to her for any of the reasons she has given, she can bring her life to an end.” It’s precisely knowing that there’s no legal, reliable way out that is likely to make a person desperate and more likely to make an amateur attempt that can be botched.

What options does a Canadian have who wants – or needs – to make a peaceful exit? If they are mobile and can afford it, they can travel to one of the handful of places in the world where assisted suicide is legal – Montana, Oregon and Washington State in the U.S. and Switzerland, Holland, Belgium and Luxembourg in Europe. Or they can wait. But waiting for those who think they know better to admit they don’t is tough. Tony Nicklinson found this out the hard way. Possibly he had a premonition. A few days before the English High Court hearing that would rule on his petition, he used a specially adapted computer to write: “[The decision] is important to me because it determines what sort of death that awaits me. If I win, it means that I have a pain-free death. If I lose, I am faced with the choices of living until I die of natural causes or starving myself to death … neither option is particularly inviting.”

His petition was denied, and he decided on the second option. No person should ever be forced to make that choice.

This article originally appeared in the November 2012 issue of Zoomer Magazine.