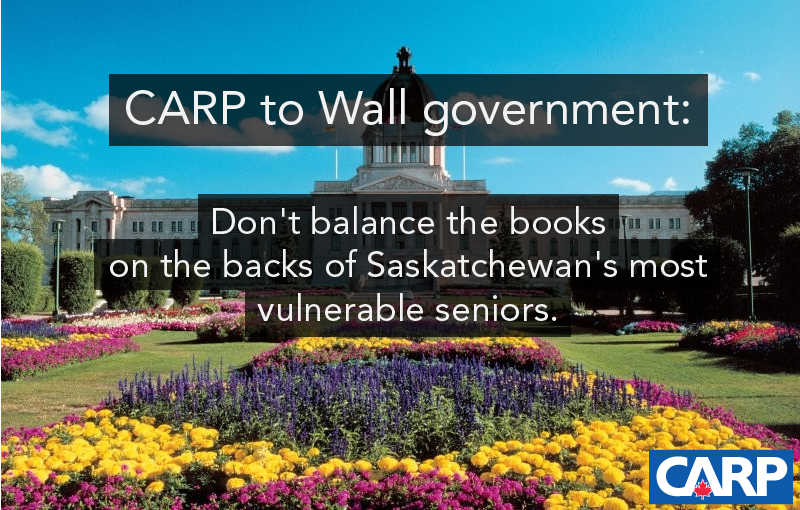 REGINA – CARP is adding the voices of its 300,000 members to the growing public backlash against the Wall government’s decision to raise drug costs for Saskatchewan’s most vulnerable seniors.

“CARP condemns the Wall government’s decision to balance its books on the backs of Saskatchewan’s vulnerable seniors,” said CARP’s VP of Advocacy, Wanda Morris. “These people are not just a line on budget sheet, they are our most at-risk citizens who already struggle to make ends meet month-to-month. For the government to be shaking down these seniors is not just unfair, it is cruel.”

Almost two-thirds of people aged 65 and over take five or more prescription drugs. The government’s proposed five dollar increase per prescription could cost some seniors hundreds of dollars more per year.

“The government is asking these seniors to choose between taking their medications or eating meals or paying bills,” said Kerry Swann, Chair of CARP’s Regina chapter. “It is unconscionable to ask vulnerable older Canadians to pay even more for the prescriptions they need to remain healthy. This decision will have real, human consequences.”

This is not the first time the Wall Government has targeted seniors. Last year, the government lowered the threshold for eligibility to participate in the Seniors’ Drug Plan resulting in 6,000 people finding themselves no longer eligible for the plan.

“The Wall government should follow the example of Ontario and Nova Scotia and change course on this wrong decision,” said Morris.

The governments of Ontario and Nova Scotia both recently reversed plans to increase seniors’ drug costs under intense pressure from groups like CARP and the general public.

CARP is a national, non-partisan, non-profit organization fighting for the 50+. With over 300,000 members and nearly 50 chapters across Canada, CARP advocates for financial security and improved health care for all Canadians as we age.