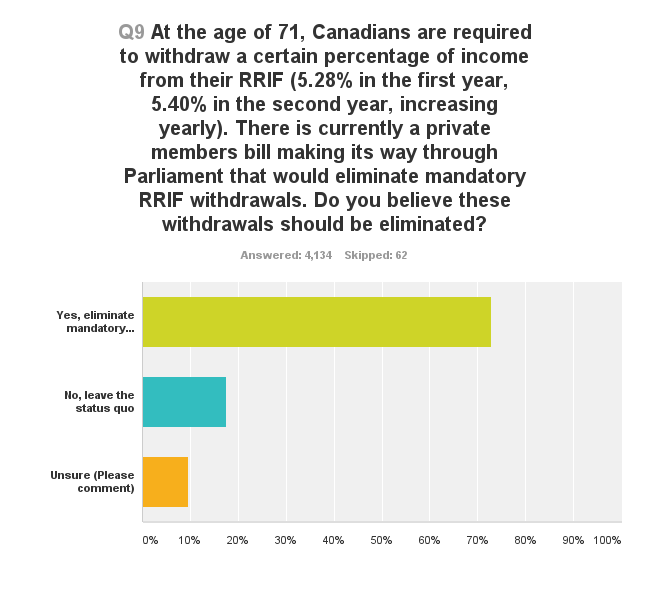 December 14, 2016 – Last month we asked you to complete our November super survey to get your input on a variety of issues we’ve been working on at CARP. We heard from over 4,000 of you from every province and territory in Canada.

Your top priorities for 2017

To help us plan for 2017 we asked for your input on top advocacy priorities. Here’s what you told us you’d like to make sure we address:

1. Reducing health care wait times;
2. Increasing investor protection;
3. Reducing Elder Abuse/Anti-Ageism;
4. Age-friendly cities;
5. Fixing the GIS (for low income seniors) so they can do some work without losing their benefits.

Beginning at age 71, Canadians must transfer their RRSP balances into either an annuity or a Registered Retirement Income Fund (RRIF). If they choose the second option, they must begin to make minimum scheduled withdrawals of the fund balance (5.28% in the first year, 5.40% in the second year, and increasing yearly). While withdrawing these amounts doesn’t mean they must be spent, we know from behaviour economics that this is a likely result. Because the minimum withdrawal rates were set at a time when individuals were likely to earn a higher return on their assets, the current schedule of mandatory RRIF withdrawals creates a high likelihood that individuals will outlive their assets.

We asked three questions on elder abuse. Approximately 7% of our members reported experiencing elder abuse in the past two years, however 15% indicated they had personally witnessed it happen to another senior. The vast majority of our members (84%) believe that Canadians should be required to report elder abuse to the authorities when it is suspected. 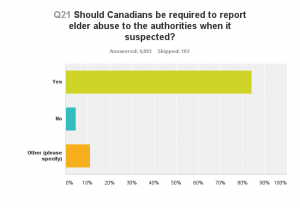 Seniors on fixed-income may not be able to weather significant spikes in housing costs and hdyro. Hydro rates have been increasing across the Country, but Ontario has seen disproportionate increases. We suspected this may be impact our members in Ontario. Not surprisingly, a significant number of our members (36.55%) cannot afford the increases to hydro.

CARP took part in a consultation with the federal government on age friendly cities. There are many different aspects to a city that is age friendly and some of the concerns shared by our members include:

We asked you whether you support mandatory road tests after a senior reaches a certain age. The overwhelming majority (78.5%) were in support of mandatory road tests. When the time comes to give up a drivers’ license, many of our members (49.5%) told us they would not have alternative means to easily access groceries, medication, etc.

Finally, we asked our members who they would have voted for in the U.S. election in November, 2016. While some of you wanted a third party – or a spoiled ballot – those of you who picked one of the front-runners opted for Clinton (82%) far more than Trump (18%).

View the full results of our November Super Survey.