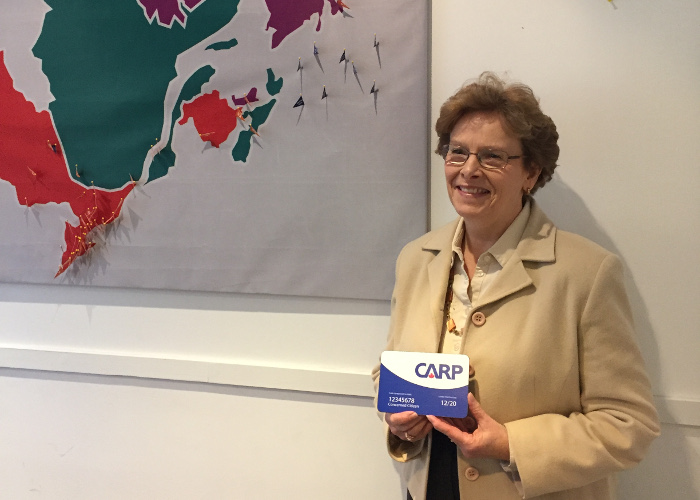 Photo caption: Linda Routledge of the Canadian Bankers Association is a CARP member.

On January 19th, 2017, CARP’s Wanda Morris, VP of Advocacy, and Marissa Semkiw, Director of Policy met with Linda Routledge, Director, Consumer Affairs at the Canadian Bankers Association (CBA) to exchange information on seniors’ financial issues and elder financial abuse. They discussed what both organizations are doing to align efforts to minimize abuse and protect against elder financial abuse in Canada.

Routledge noted that “Educating seniors about financial abuse is important. Banks offer information in branches and on websites, particularly related to powers of attorney and joint accounts, two common situations where, in the wrong hands, abuse can happen. The CBA also offers free seminars to seniors’ groups through its ‘Your Money – Seniors’ program, which deals with recognizing the signs and protecting yourself and your loved ones from financial abuse.”

Lowering probate fees
One of the actions discussed was asking provinces to lower probate fees. These fees can be burdensome, and often incent individuals to open joint accounts, which can make seniors particularly vulnerable to abuse. This is especially critical given that a loved one perpetrates the vast majority of elder financial abuse cases in Canada.

Standardizing Powers of Attorney
Additionally, CARP and the CBA spoke about standardizing Powers of Attorney across provinces. At the moment, a POA valid in one province may not be valid in other provinces. This makes it more difficult for banks to validate POAs and also is of concern because if a POA is not valid outside the jurisdiction it was executed in, that responsibility could fall on someone other than the person appointed as the POA, and thus opens the door to potential abuse.

What’s next?
CARP was pleased to discuss these issues with the CBA and looks forward to working with then on these issues, and others as well.

To help protect yourself against financial abuse and other investor traps, CARP has put together its free “Top Investor Traps” Guide.