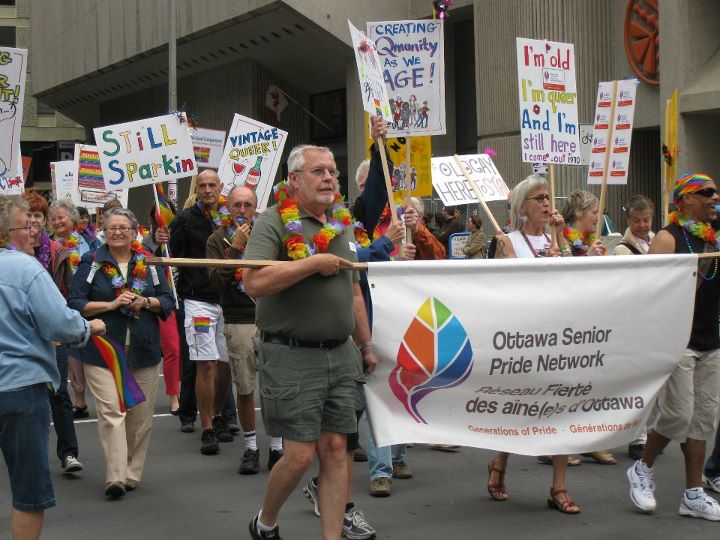 Today is National Coming Out Day, an international civil awareness day celebrated annually. This day celebrates ‘coming out’ and aims to raise awareness of the LGBT community and the civil rights movement.

The majority of lesbian, gay, bisexual, and transgender (LGBT) seniors over 65 have lived most of their lives in an environment of overt discrimination and hostility.  For many, it was impossible to be ‘out’ and to feel safe.  Here in Ottawa in the 1950s and 60s, gays and lesbians were victims of ‘witch hunts’ designed to ‘root out homosexuals’ in the armed forces and civil service.

Indeed, until Pierre Trudeau made his famous “The state has no business in the bedrooms of the nation” speech in 1969, it was a criminal offence to be gay in Canada.  Trudeau introduced an omnibus bill that, when passed, removed homosexuality from the Criminal Code.

It wasn’t until 1986; however, that changes to the Ontario Human Rights Code gave basic protection to lesbians and gays.  Transgender folks had to wait until 2012 for similar legislation in Ontario and until June 2017 for federal protection.

At a time in their lives when they require services and programs, many LGBT seniors report heightened fear and anxiety about disclosing their sexual orientation or gender identity to service providers.  Ipsos Reid conducted a survey of Ottawa LGBT seniors in 2015 for the Ottawa Senior Pride Network (OSPN). They found:

Brian Hobbs, a long-time volunteer with OSPN, wrote the following story about the experience of two friends:

A passing glance through a crowd of party goers was the lightning rod that ignited the passionate romance between Bill and George.  It was Christmas 2010, a devastatingly empty time.  Both men were in their 70s and grieving the loss of their beloved wives who had recently been taken by cancer.

Although Bill and George had both always had an attraction to men, having a gay relationship in their youth was out-of-the-question.  Their fundamental identity and emotions had to be buried under layers of acceptable veneer.  They both married women and raised children, but there was a void deep inside each of them.  They were never truly themselves…until they met!

Almost overnight, they developed a committed, loving, intimate relationship.  Bill and George discovered common interests: golf, theatre, entertaining, cottage time.  Some family and friends embraced them.  New friends encouraged them.  Life began to make sense and they moved into their own home.

This new life also had its disappointments and sadness.  Not all of their kids, four in total, supported their ‘gay’ dads.  There was anger and shame.  “Don’t tell the grandchildren and old friends.  Don’t bring him to Christmas dinner or birthday parties.”  There was rejection.  ”That man is manipulating you into thinking you are gay.  Make sure he’s not in the will.”

Despite all that, theirs was a solid partnership.  Their love flourished, giving new meaning to “young at heart”.  Life was better than it had ever been for these two gentlemen, until tragedy struck weeks after their fifth anniversary.

The only word the two men heard the doctor say was “Alzheimer’s”.  Within months, the insidious disease ravaged Bill’s mind and body.  He rapidly needed acute care and was admitted to a Long Term Care residence.  Bill was fading away.  Their longing to touch and hold one another was more poignant than ever.

Unfortunately, the urgency of their love was overridden by fear.  They believed that Bill’s caregivers would discriminate against him should they discover Bill and George were a couple.  That fear was deeply ingrained from years of living “under cover”.  So, they represented themselves as just “good buddies”.  They only felt free to embrace when a trusted friend would stand by the door and signal the approach of a staff member.

Bill’s children limited George’s visits to two days a week.  If family members came when George was visiting, they did not acknowledge him.  George would graciously and sadly leave.

The last person Bill recognized before his death was his sweetheart George.  Since the loss of Bill, George’s physical health and spirit have weakened.  He moves forward in life with a heavy heart.

Whether or not the LTC staff would have discriminated is unknown.  Yet, the fear of being treated disrespectfully was palpable for Bill and George.  Despite advances in Canadian society, many LGBT seniors continue to live in the closet today fearing perceived or, in some cases, real discrimination.  As increasingly confident LGBT Baby Boomers age, my hope is that they will stand firm and demand to be treated with the same dignity and respect as every other citizen in Canadian society.

Ottawa Senior Pride Network (OSPN) is a volunteer-run network of LGBT seniors (50+) and allies, which was formed in 2008.  We are committed to creating safe, LGBT-positive seniors’ services & programs, and residential environments in Ottawa through education, advocacy, and outreach.  OSPN is also working to build a strong connected, visible senior LGBT community in Ottawa.  Find out more about us at www.ospn-rfao.ca.

CARP advocates for improved healthcare, financial security and human rights for Canadians as we age. While society is more accepting now, challenges remain. CARP stands with Bill and George; ALL Canadians deserve the right to live with peace and dignity.