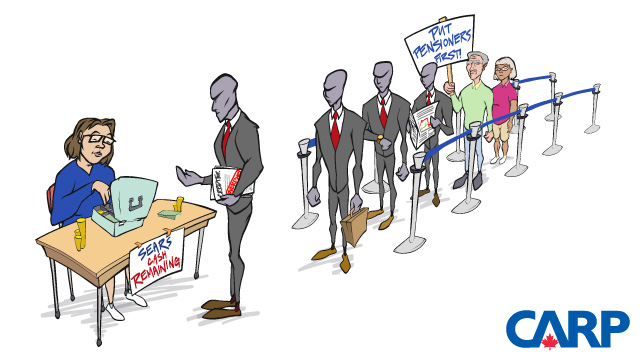 A limited number of media are invited to attend the presentation from 3 to 5 pm on Oct. 25 on Parliament Hill. Contact [email protected] to RSVP or to request an interview.

Pensioners’ Financial Livelihood at Risk: CARP Demands Pensioners be given Priority in Bankruptcies

On October 25th, CARP, Canada’s largest non-profit advocacy organization, will be on Parliament Hill urging MPs to create new laws to better protect pensioners. It will present its current national campaign for strengthened protections as well as public reaction to proposed legislative changes. More than 20,000 Canadians signed CARP’s petition and urged their MP to take action to protect pensioners (www.carp.ca/pensioners).

CARP is reacting to Sears Canada filing for insolvency and announcing it would reduce pensions and eliminate health benefits. As of October 1st, Sears was allowed to walk away from pension obligations while its executives were paid $9.2 million in bonuses in an unsuccessful bit to keep the business afloat.

“When companies declare bankruptcy, pensioners and their pensions are given the short stick,” said CARP’s VP of Advocacy Wanda Morris. “The assets that are available go to secured creditors and executives often walk away with their wallets unscathed. This happened with Nortel, Target Canada, and Indalex Canada. It’s happening with Sears right now. Laws need to change to better protect pensioners. Current laws jeopardize the financial security of hundreds of thousands of Canadians.”

“Pensioners today are dually exposed: companies aren’t fully funding their pension obligations, and bankruptcy law relegates pensioners to the back of the line when it comes to collecting unfunded amounts,” said Morris.

Ontario residents can access some relief through the Ontario Pension Benefits Guarantee Fund. This fund guarantees private sector pensions up to $1,000 per month. No other Canadian province has such a fund.

As a result, CARP is calling for the government to:

“Canada’s bankruptcy laws must change to recognize that after employees, pensioners have top claim to any remaining assets until their pensions are fully funded,” said Morris. “Just because a company fails doesn’t mean its current and future pensioners should lose their retirement security too. All Canadians bear the costs when pensioners lose retirement income.”

CARP (formerly known as the Canadian Association of Retired Persons) is a national, non-partisan, non-profit organization that advocates for financial security and improved health care for Canadians as we age. With more than 300,000 members and local chapters across Canada, CARP plays an active role in the creation of policy and legislation that impacts older Canadians. CARP works closely with all levels of government and collaborates with other organizations to advocate on health and financial issues.

To coordinate an interview with a CARP representative, please email:
[email protected]