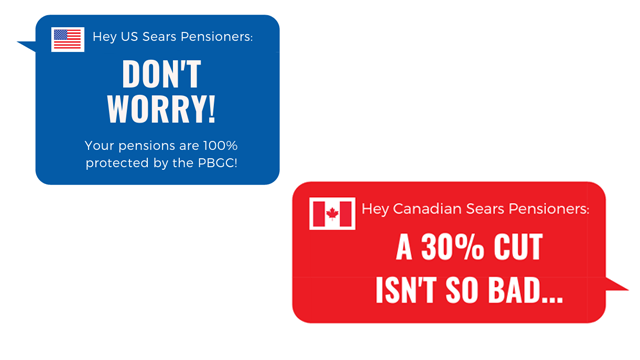 Toronto, October 18 2018 — CARP is calling on the Canadian government to protect all Canadian pensioners in light of the announcement on October 15, 2018, that the United States’ Pension Benefit Guaranty Corporation (PBGC) will cover the shortfall for all of Sears’ 90,000 American pensioners. Earlier this year, all Canadian Sears’ pensioners lost their medical and dental benefits, and those outside of Ontario took a massive 30% cut in their pensions.

On October 15th, US-based Sears filed for Chapter 11 Bankruptcy protection. All 90,000 US Sears pensioners will be shielded from the fall out because the company’s long-term pension obligations, which were underfunded by over $1.5 billion, are covered by the PBGC.

PBGC has been working with Sears for several years to improve the funding of the company’s two defined benefit pension plans. PBGC expects that its guarantees would cover the vast majority of benefits earned under those Sears plans. If circumstances require, PBGC can step in and provide guaranteed benefits.

The time for decisive action is overdue. Bill C-405, introduced this week by Erin O’Toole, MP for Durham, would make incremental improvements to pension protection by providing more flexibility. This is a positive step in highlighting the need for stronger pension protection, but does not address the fundamental need to bring Canada in line with the US and the UK. CARP is calling on the federal government to fulfill its 2018 federal budget pledge to consult on how best to support Canadian pensioners. To date, there has been no action on that promise.

CARP is a non-profit, non-partisan association representing more than 300,000 older Canadians across Canada. We advocate to uphold the rights and improve the lives of Canadians as we age. CARP’s policy platform, The Faces of Canada’s Seniors, released earlier this month, urges government to protect pensioners from corporate defaults. The 1.3 million Canadians with defined benefits pension plans need super-priority status to protect them in the event of an insolvency. Over 95% of CARP members surveyed support this call to action.