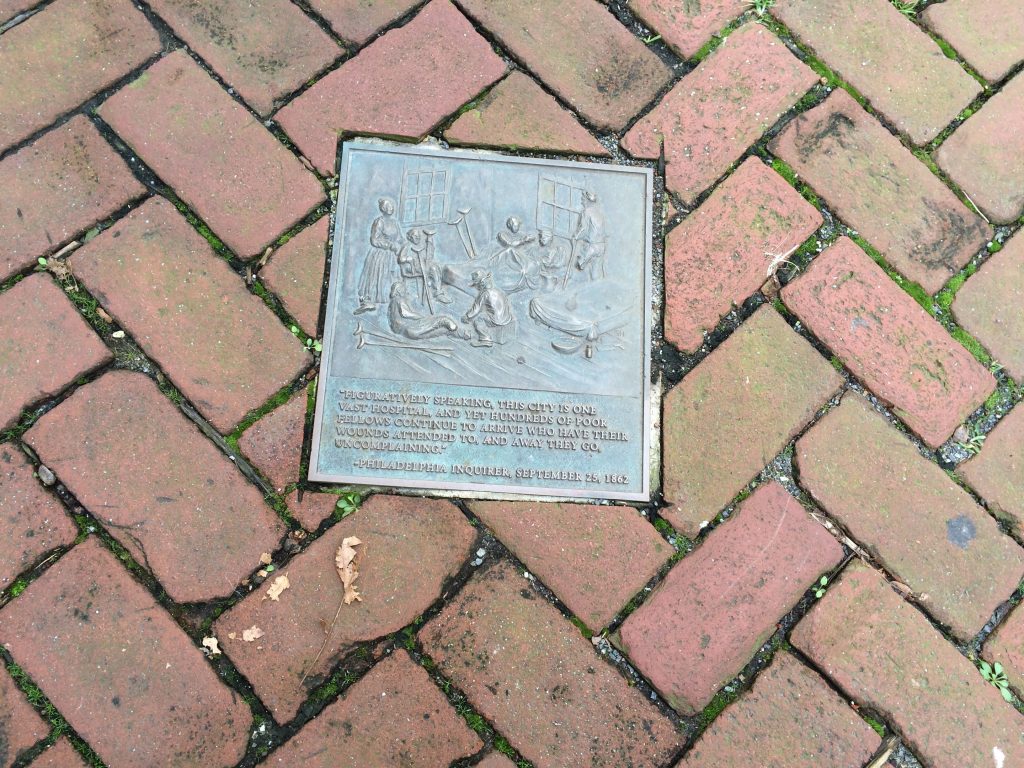 It’s hard to imagine a town more linked to American history than Frederick, Maryland. It was in the middle of the action in both the American Revolution and the Civil War. A Frederick resident wrote the American national anthem in the War of 1812. Frederick honours the first American president (…maybe…) and is home to one of the first air-conditioned buildings on the east coast. And today, a local vineyard is making history with its award-winning wines and sustainability projects.

Here’s some of what makes Frederick the quintessential American town.

A memorial outside the Frederick courthouse pays tribute to the first president of the United States. No, not George Washington – John Hanson.

It’s a bit of a stretch, but in 1781 Hanson was named President of the United States in Congress Assembled, a ceremonial position in the Confederation Congress. Within a week he realized the position bored him and he considered resigning, but stayed on for a full year’s term out of patriotic duty. His accomplishments included launching the Treasury and Foreign Affairs Departments, and removing all foreign troops from the country.

George Washington was elected President in 1789.

Oh, say can you see

Francis Scott Key, author of the American national anthem, was a resident of Frederick. During the War of 1812, he awoke after a night of attacks on Fort McHenry to see the flag still waving, and was inspired to write “The Star-Spangled Banner.” Herbert Hoover officially made it the national anthem with a Congressional resolution in 1931.

Key was a committed churchgoer, and worshipped at All Saints Episcopal Church in Frederick when he was in town.

Frederick was close to much of the action in the American Civil War, and so it was a major medical centre for most of the war. The town was particularly overrun by patients from the battles of Antietam (1862) and Gettysburg (1863), so much so that every church in town was turned into a hospital, as were nearly two dozen other buildings. Maryland was split between Union and Confederate supporters, although the majority of citizens in Frederick supported the Union. Nevertheless, patients from both armies were treated here.

Because of the medical role Frederick played in the war, it houses The National Museum of Civil War Medicine. The building was previously owned by an embalmer, so perhaps it’s no surprise that the museum is said to be haunted. Members of the museum staff often hear unexplained scratching noises, and objects mysteriously disappear and then reappear elsewhere. There have been numerous sightings of ghosts on the third floor, including an undertaker’s assistant, soldiers from the Civil War, and the man who transported bodies to the mortuary. Every Halloween the museum conducts a ghost tour; take it at your own risk.

The Tivoli Theater was built in 1926. It was known for its elegance, and for being one of the largest buildings in Frederick. But its claim to fame was being one of the first buildings on the east coast to be air-conditioned. Air conditioning at the time was rare and expensive, and the owners couldn’t have afforded to install it themselves.

Warner Brothers executive Jack Warner was visiting town in 1940 when Frederick native Edward Thomas gave him a tip on a horse race. Warner bet $50,000 on that long shot and won. He asked the doctor what he could do to thank him.

“I like to go to the theatre,” the doctor said. “And our summers are awfully humid. I’d love to watch my movies in comfort.”

And that’s how the Tivoli came to be air-conditioned.

More recently, a mile-and-a-half long riverwalk has been built through the city. The walk is lined with restaurants, shops, gardens, and a public library. Artist William Cochran painted the bridges, and many other buildings in town, with a series of trompe l’oeils. I walked from one end to the other and back again. It’s a beautiful way to spend a sunny Saturday.

Black Ankle Vineyards opened in Frederick County in 2008. But before the doors had even opened to the public, the vineyards had already won the title of 2008 Best Maryland Wine for their Crumbling Rock Bordeaux-style blend. Since then, Black Ankle has won other awards, but they’re happiest when people find their wines through word-of-mouth.

Sustainability is a driving force for Black Ankle’s owners, Sarah O’Herron and Ed Boyce. The buildings on the property are constructed solely from materials found there – straw, clay, stone and wood. The arches and fireplaces are made from rocks that were removed from the soil when O’Herron and Boyce planted the vines in the early 2000s. Solar panels supply the vineyard with 80-85% of its power needs. No herbicides, and minimal pesticides, are used on the vines. The farm crew harvests grapes by hand.

The vineyard’s name comes from the road it’s located on, which is named after an old Native American trail, Black Ankle. The owners like to say it also refers to the colour of the workers’ ankles when they’re done stomping the grapes. They enjoy that story because it reminds them of the history of their profession, and connects them to vineyards of the past and the way grapes were traditionally prepared for aging.

There’s nothing like a tasting at Black Ankle on a beautiful fall day. We sat on the patio sampling the six wines we were offered, from the complex Feldspar III blend to the beautiful golden Terra Sol dessert wine. The sun was shining, and a gentle breeze sent the Black-eyed Susans in the gardens swaying.

I could have stayed all afternoon.

Notes:The author visited as a guest of Visit Maryland, who did not review or approve this story.

Where to eat and drink

Family Meal: Three different people in town told me to order the fried chicken. I’m glad I listened. The chicken was served with biscuits in a sunny yellow hen-shaped bowl, and was tender on the inside and crisp on the outside. Owner Bryan Voltaggio was a runner-up on both Top Chef and Top Chef Masters. 882 N East St, Frederick.