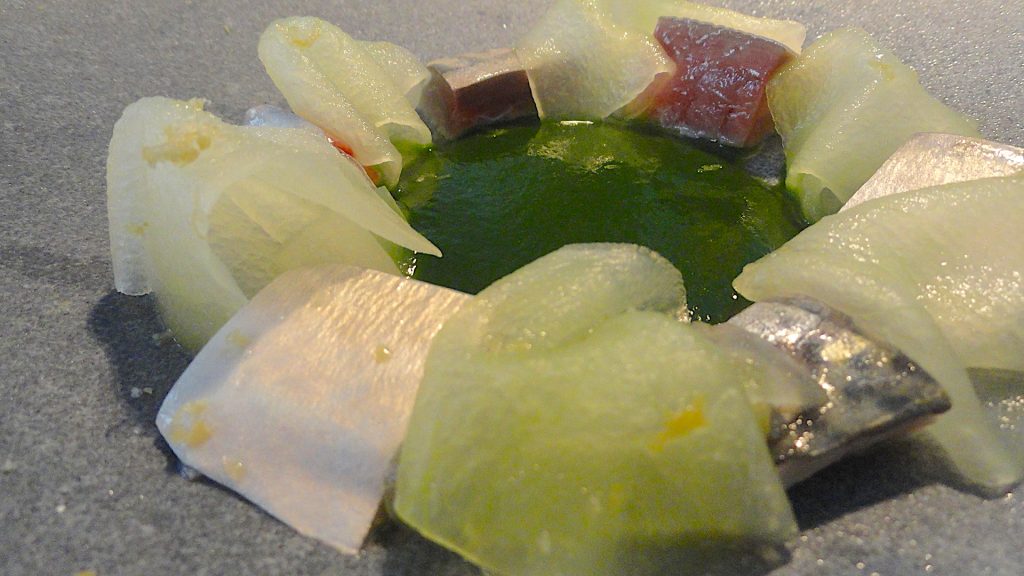 Visiting a Michelin-starred restaurant is a special occasion. If you aren’t familiar with the concept, Michelin recognizes the best restaurants in the world with one, two or three stars; it’s one of the most prestigious awards a restaurant can receive. Since the Michelin team hasn’t yet come to sample our wonderful Canadian restaurants, I can only eat at one when I travel internationally.

And in my travels, I’ve been lucky to eat at two Michelin-starred eateries. Although both meals were superlative, the experiences were memorable for very different reasons.

I visited Zeitwerk on a recent visit to eastern Germany, and everything about this restaurant in lovely Wernigerode radiated Michelin quality.

It would be impossible to choose a favourite course, but the Country Loaf was a true standout. Ham (delicately served with clothespins on a mock clothesline), and country loaf, soft on the inside and crispy on the outside, formed the base. Butter with celery seeds, and salty roasted pumpkin seeds, made it perfectly addictive. If I had to choose one course to eat, the Country Loaf would have been it.

But then I would have missed the asparagus foam, as delicate as angel  wings. And the rutabaga with butter and crisped wild garlic.

Dessert was a gorgeous rhubarb ice, served with strawberry marmalade,  quark and a honey wafer. This course took aroma to a new level. The server  sprayed the back of my hand with a whiskey solution, so the scent of the whiskey would inform the flavour of the dessert. It was magnificent.

The menu changes frequently to reflect seasonal produce and the creativity of chef Robin Pietsch. So if you go, your experience will be different than  mine. But given the beauty of the dishes and attention to fulfilling every  sense, I have no doubt yours will be equally wonderful.

After dinner, I walked through the quiet streets back to my hotel. It was an elegant evening from beginning to end.

Compare and contrast with my first visit to a Michelin restaurant:

I visited Relae with my family a number of years ago on the suggestion of a chef friend, John Placko. Even then, Copenhagen was known for its brilliant food. The world-renowned Noma restaurant was out of our price range but Relae, run by two former Noma staffers, fit the bill perfectly.

The year we visited, Relae had been ranked as one of the 50 best restaurants in the world.

It was the last night of a holiday that had included a Baltic cruise, and my husband, teenage daughters and I looked forward to celebrating over dinner before flying home.

The food was brilliant: pickled seaweed with baked celeriac and black olives; leeks in mustard breadcrumbs; black pepper ice cream. My husband and oldest daughter agreed with my assessment – the food was indeed brilliant.

Then, there was my youngest daughter. Despite my ongoing attempts to encourage her to try new foods, her palate included grilled cheese sandwiches, chicken noodle soup, pizza … and not much else. I cajoled her just to taste what she’d been served, and she responded with an expression of abject misery. I couldn’t send a full plate back to the kitchen, so as each course came, I spread her leftovers over the rest of our plates.

By the end of the meal, three of us had eaten well, and one of us had eaten not at all. We agreed to buy her something to eat on the way back to our hotel, which is how we ended up ten minutes later, buying a Whopper sandwich from (non-Michelin-starred) Burger King.

Did I mention that Relae was one of the 50 best restaurants in the world?

Now as a young adult, she enjoys a much wider variety of food. But she still takes some pride in the likelihood of being the only person to have ever visited a Michelin-starred restaurant and eaten nothing.

Note: The author visited Wernigerode as a guest of Saxony-Anhalt Tourism, who did not review or approve this story. The author visited Relae on her own dime. She was compensated for neither the meal nor the work of making the kitchen think her daughter had eaten their glorious food.