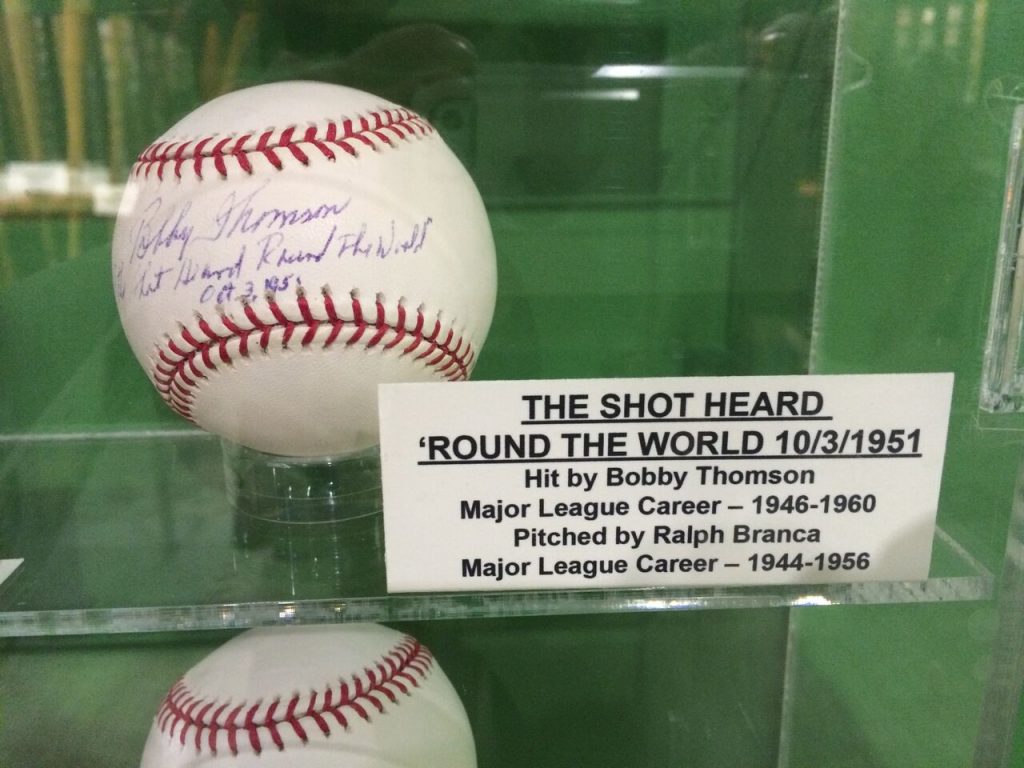 If you’re a baseball fan, or a movie fan, you’ll recognize this quote from Field of Dreams, one of the best films ever made (rankings compiled by me*).

What if there was a museum that took you back to the innocence of your childhood baseball memories? If they built it, would you come?

I’ve got great news for you, sports fans! They’ve already built it, and it’s the Elliott Museum in Stuart, Florida. Its Baseball Gallery recollects the glory days of baseball, and reminds you why it’s the best sport of all.

Much of the collection was bequeathed to the Elliott from a single donor, with the stipulation that it would be placed in a permanent gallery open to the public. According to the museum, it’s the second-largest collection of signed baseball collectibles in the world, only trailing Cooperstown’s Hall of Fame.

The oldest memorabilia on display is a set of six baseball cards from 1887. These so-called “tobacco cards” were placed in packs of cigarettes to strengthen them, so they wouldn’t get crushed in a pocket. Issued by Goodwin & Company, the collection includes Buck Ewing (a great catcher from the 19th century), Mike “King” Kelly (the first professional player to write a book about his career) and John Montgomery Ward (a Columbia law school grad who tried to start a players’ association).

One of the most unique pieces of memorabilia is a cancelled bank cheque signed by Shoeless Joe Jackson. A handwriting expert suggested it may have been signed by two different people – “Joe” was likely written by the illiterate ballplayer, while “Jackson” may have been written by his wife or an assistant.

You can visit the Baseball Gallery any day the museum is open. But the experience is even richer if you go on one of the days Frank Spera is conducting a tour.

Spera is a retired schoolteacher from New Jersey, who offered to volunteer in 2013 for the museum’s grand reopening. On a break, he wandered upstairs and into the Baseball Gallery.

“When I was a kid, I collected baseball cards, chewed the bubble gum in the packs, and pulled the fillings out of my mouth!” said Spera. He was a Yankees fan, and his favourite player was Joe DiMaggio. “But I hadn’t thought about baseball in sixty years.” When the game started to change, he stopped watching. “I saw spoiled athletes, and compared them to the athletes of my youth. Something happened to the game and its relationship with the fans.”

But when he walked in the baseball gallery in March 2013, everything changed. “Something happened to me, almost spiritual,” he said. “A lot of happy memories flooded back, one after another: childhood friends, baseball cards, ball games.”

I could relate to it all. I became a passionate fan during a Blue Jays’ game at Tiger Stadium in 1983. (Joey McLaughlin was pitching in relief. If you followed the Jays in 1983, you know the rest of the story.) I spent the next ten years cheering for Lloyd (“Shaker”) Moseby, Tom (“The Terminator”) Henke, and Dave (“Dave”) Stieb. Two World Series victories in the early 90s sealed my love affair with the sport.

But the strike in 1994 put a blight on the game for me, and the steroid scandals finished it off. I just stopped following baseball with any kind of passion.

And that’s why Spera’s words resonated. “It’s like walking into an attic where I kept my childhood memories,” he said.

I didn’t find a Lloyd Moseby card among the 600 on display, but I found a Bob Feller (my dad’s favourite player), and a Tom Henke (my husband’s favourite). The gallery displays balls signed by Sandy Koufax, Nolan Ryan, Hank Aaron, Johnny Bench and Ted Williams, to name just a few. One ball is signed by both Ralph Branca and Bobby Thomson. You’ll find bats used by Roberto Clemente, Babe Ruth and Josh Gibson.

It’s a one-room collection, but that’s part of its charm. You can settle in and savour it all, without feeling you have to rush. Whether you spend your time checking out the collection, or taking a seat to watch the baseball film, you’ll feel like you’ve come home.

Is this heaven? No, it’s the Elliott Museum in Stuart, Florida. It just feels like heaven.

* I’m also moved to tears when I hear the theme song from Mel Allen’s This Week in Baseball, so I may not be the most neutral observer.

For more information on Stuart, Florida and the Elliott Museum, please check out Visit Florida.

Notes: The author visited Stuart as a guest of Discover Martin County, who did not review or approve this story.

Hutchison Island Marriott Beach Resort and Marina – This popular resort offers beach access, a pool, tennis courts and a golf course on its 200 acres. Don’t miss the beach yoga (see “What to do,” below). 555 NE Ocean Blvd.

Beach yoga – If you stay at the Hutchison Island Marriott, try their beach yoga, one of the loveliest classes I’ve taken. The instructor asked us to choose an intention at the beginning of class (I chose strength). At the end, we wrote its opposite (weakness) in the sand with a seashell and watched the tide wash it away. We finished by making a wish and tossing our seashell back into the water. 555 NE Ocean Blvd.

Standup paddleboarding – Ohana Surf Shop is right across the road from the Hutchison Island Marriott, and has all the equipment you need to take you on a guided paddleboard tour. Enjoy the party bus on the way there and back! 652 NE Ocean Blvd.

Bridge Road – It’s worth the short drive south of Stuart to see this iconic road, lined with banyan trees. Set aside some time to explore the town of Hobe Sound and Blowing Rocks Preserve while you’re there. Just outside of Hobe Sound.

District Table & Bar – In my dreams, I can eat peaches year round. So I wasn’t going to pass up the peach salad with Burrata, arugula, and pecans. And the silken buttermilk pie was equally glorious, served with peach chutney, honeycomb, and sweet corn ice cream. Book a table or come early – I arrived at 5:30 without a reservation and was lucky to get a seat at the bar. 4665 SE Dixie Highway.

Riverwalk Café and Oyster Bar – Another popular choice in Stuart – all the tables were booked, and every bar stool was full by 6:00. The star of the menu was the tangy Ahi Tuna Nacho plate that was almost too beautiful to eat. 201 SW St Lucie Ave.