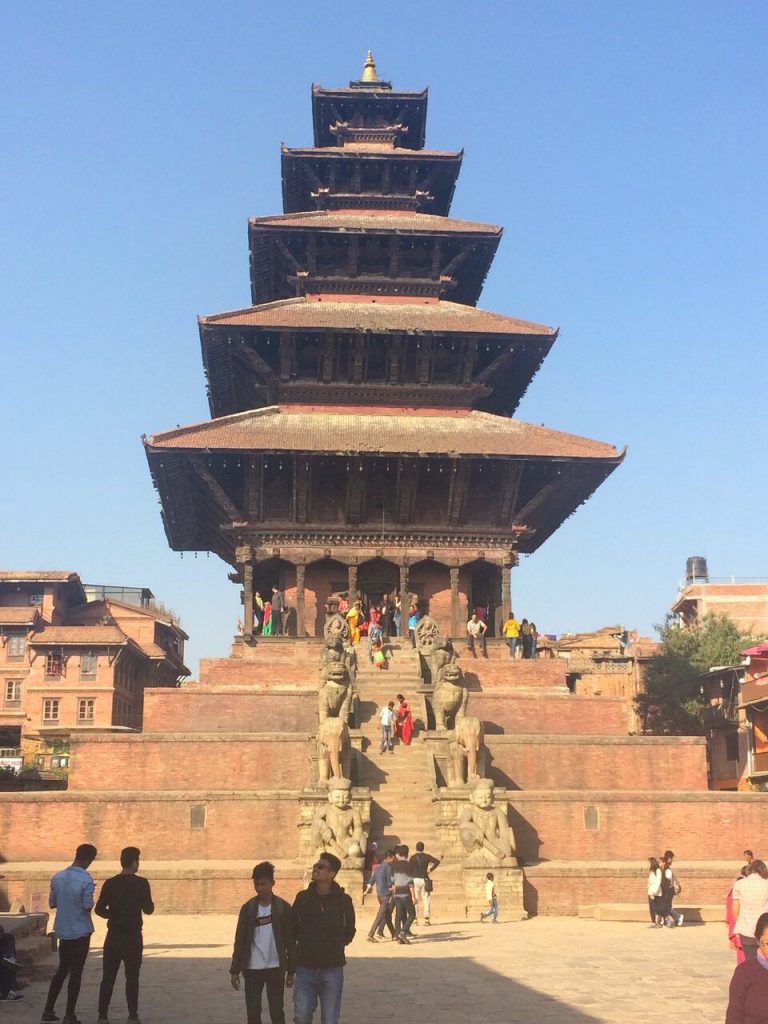 When I awoke to the sound of bells at 4 am, I understood how Bhaktapur (“The city of devotees”) got its name.

Prayers begin early in the morning, and so do the bells. It’s a small price a visitor pays for staying in the heart of this UNESCO World Heritage site. Just steps from the hotel are temples, monuments, and colourful markets. Our guide, Satya, led us through the narrow streets that often opened up into vast city squares.

Bhaktapur is a short drive from Kathmandu; whether you’re staying overnight or just enjoying its charms on a day trip, it should be a highlight of any trip to Nepal.

The History of Bhaktapur

In the 15th and 16th centuries, the Kathmandu Valley was divided into three kingdoms, with different members of the Malla dynasty reigning over each area. For three centuries, the kingdoms competed with each other in many ways, including architecturally. The result is reflected in the beauty of Bhaktapur’s temples, squares and gates.

Nepali architecture is unique. Because ancient Nepal was on the trade route between India and China, its architecture was inspired by both countries. Look for multi-layered temples with roofs on each level, slanted roofs that are often covered by jhingati (clay tiles), and elaborate wood and bronze carvings, particularly in sculptures and around doorways and windows.

Bhaktapur was badly damaged by earthquakes in both 1934 and 2015, with many irreplaceable buildings collapsing in 2015. Much of the city is being rebuilt and, even in partial disarray, the glory of the architecture shines through. (Public buildings are typically in better shape than private homes, many of which have not yet been repaired.)

I travelled with Intrepid Travel, whose commitment to the area was shown when its non-profit arm, the Intrepid Foundation, donated all the profits from their 2015-16 Nepal trekking season to charities that are helping to rebuild the country and assist survivors.

Satya, who accompanied us on our eleven-day journey in Nepal, led us through Bhaktapur’s four main squares, beginning with Durbar Square, once home to the city’s royal palace. The stunning Golden Gate, entrance to the former courtyard complex of the 55 Window Palace and the sacred Taleju Temple, is the visual highlight among the square’s many stunning buildings.

The Golden Gate was built in the 18th century during the Malla dynasty, and is a gorgeous example of both Nepali architecture and repoussé metalwork. The Hindu goddess Kali and mythical bird Garuda embellish the top of the doorway, while other gods are honoured in gilded copper designs on both sides of the door. Experts consider it to be one of the greatest works of ancient Nepali art.

Walking through the arched doorway, we entered the courtyards of the Royal Palace. Much of the courtyard complex was destroyed in the earthquakes, but the Taleju Temple, one of the most sacred temples in the country, remains intact. Only Hindis are allowed to enter, but even from the outside I could see the beautiful wood carvings around the archways and window frames.

Further in is the Naga Pokhari, or royal bath, which is surrounded by enormous stone asps (which represent nagas, or serpent deities). The pool was also used for the ritual immersion of the idol of Taleju, a goddess with four heads and ten arms.

When we re-entered Durbar Square, we admired the lovely 55 Window Palace and its elaborately carved wood façade that sits to the right of the Golden Gate.

The first thing you’ll notice about Nyatapola Temple in Taumadhi Square is its good condition, compared to many other local buildings. It was well-built, which helped it survive both earthquakes virtually unscathed.

Built in the early 18th century and dedicated to the goddess Siddhi Lakshmi, the building is an exceptional example of a five-tiered Nepali temple. The stairs leading up to the temple bear a series of statues that are temple guardians. In ascending order, they represent wrestlers, elephants, lions, gryphons, and finally the tiger and lion goddesses (Baghini and Singhini). “Each guardian is ten times stronger than the guardian on the level below,” Satya told us. “Only priests are allowed to see the image of Siddhi Lakshma that’s inside the temple.”

We stayed overnight at the Bhadgaon Guest House, just off Taumadhi square, in rooms that were small, simple and comfortable. It was the bell-ringing in the square that awakened us in the morning, as the devoted came to pray.

I’ve just scratched the surface of the beautiful architecture in Bhaktapur. Dattatreya Temple is dedicated to Brahma, Vishnu and Siva. The famous Peacock window, carved on an otherwise ordinary building in the 17th century, couldn’t be more intricate. And I took photos of beautiful and unique doorways on virtually every street.

While Bhaktapur feels like a monument, it’s very much a place where people live, work, and congregate. The city is filled with markets, stores, and individual vendors with their goods on display. Residents often work alongside magnificent temples and monuments, whether they’re selling colourful textiles, fish, fruit and vegetables, or other goods.

I asked Satya about a crop that had been harvested and was sitting by a wall in the middle of the city. “It’s rice,” he said. “They spread it in open spaces, let it dry for four or five days, then put it in storage for up to a year. If they grow more than they can eat, they’ll sell the rest in the market.”

In Pottery Square, we watched labourers carry clay into the marketplace, potters making bowls on pottery wheels, and others who gathered the finished products to be dried.

Satya stopped to show us a typical Nepali hat, and tell us what it meant. “The shape of the hat represents our mountains,” he said. “But it also represents the pride we have in our country, which is as high as the mountains.”

After visiting medieval Bhaktapur, it’s easy to see that pride is well-deserved.

Notes: The author was a guest of Intrepid Travel on their Classic Nepal journey, who did not review or approve this story.