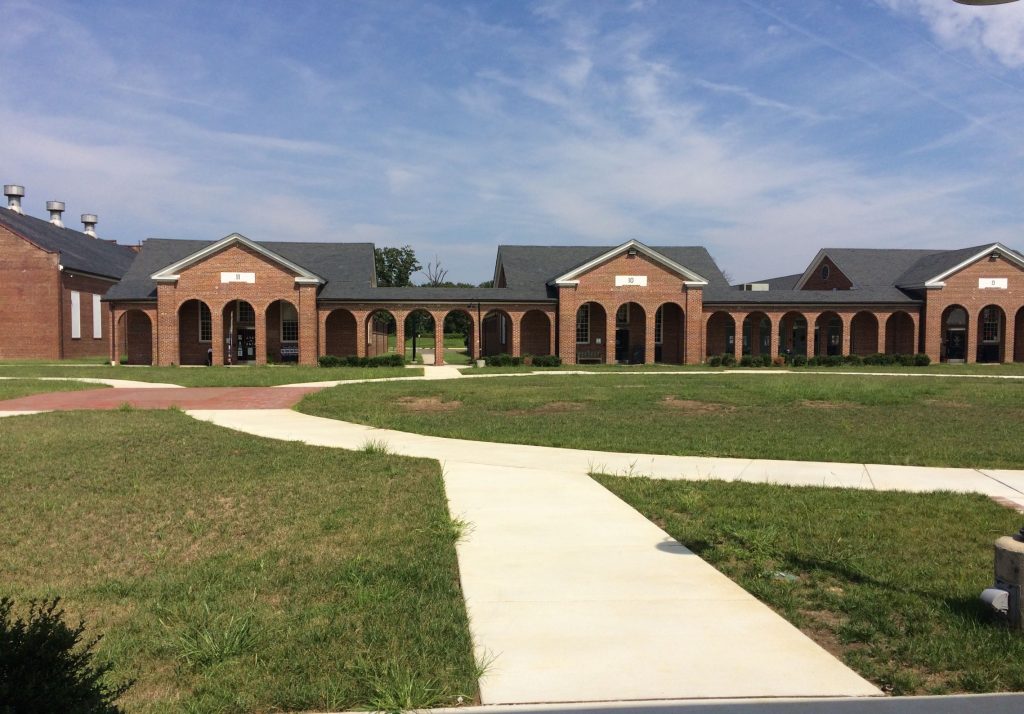 A prison turned into an art gallery may sound like an unlikely combination. But Fairfax County’s Workhouse Arts Center highlights both the courage of the most prominent women’s suffrage protestors of the early 20th century and the creativity of local 21st century artists.

The Occoquan Workhouse was built as a prison in Fairfax County in 1910, and for its first seven years housed prisoners found guilty of misdemeanours such as public drunkenness or petty theft.

Early in 1917, the National Women’s Party began picketing the White House daily, petitioning for women’s right to vote. At first, the government tolerated the picketing, but when the U.S. entered the First World War, the government’s tolerance wore thin. And in June 1917, some of the suffragists were arrested and brought to the nearby Occoquan Workhouse, including party leaders Alice Paul and Lucy Burns. The summer brought more arrests, longer jail times, and deplorable prison conditions. Women were beaten, made to sleep on straw beds in unheated cells, placed in solitary confinement, and force-fed.

When the women were eventually released, they used their experiences to advocate for the cause. In 1919, they took a whistle-stop train trip across the country, where they wore their prison garb and spoke to crowds about their treatment. This was one of the actions that spurred the U.S. government to press for the two-thirds approval required to pass the 19th amendment, allowing American women to vote for the first time.

The prison closed in 2001 and was sold to the county. A local arts foundation proposed that it be converted into an art gallery. The new Workhouse Arts Center opened in 2008, creating studio space for nearly a hundred artists to work, display and sell their pieces. Other parts of the building have been turned into public galleries and classrooms.

The Founders’ Gallery features work from all the founding members of the art center. I was particularly drawn to Joan Hutten’s Yucatan Archive. Hutten is a fiber artist, and I asked about her creative process.

“I love the color and the textures in fiber art,” Hutten said. “Many of my projects start with some bit of fiber or yarn that develops into an idea.” Of Yucatan Archive, she says: “I wove together Pre-Columbian elements with an antiqued map of the Yucatan area and included actual pieces of woven fiber, beads, and other elements inspired by the ancient cultures. I wanted to create the look of an archaeological record. It’s meant to be a tribute to the cultural past of the area.”

Hutten loves working in the Workhouse artist community, citing the collective accumulated knowledge about fiber art, and the supportive feeling among the artists. “Being on site with other artists working in a variety of media … keeps me focused on making art, provides inspiration, and motivates me,” she said. “The Workhouse offers opportunities to participate in shows, teach, demonstrate, and collaborate with other artists.”

Hutten was just one of the many artists who work and display at Workhouse Arts Center. I saw beautiful stained glass, paintings, jewelry and much more the day I visited. The art on display is incredibly diverse and fascinating, and the chance to meet with the artists who make it is extraordinary.

Notes: The author visited Fairfax County as a guest of Visit Fairfax, who did not review or approve this story.

Workhouse Arts Center is just one of the sites in Fairfax County that showcase creativity. Here’s a rundown of what this innovative county offers:

Wolf Trap National Park for the Performing Arts: Wolf Trap is the only National Park in the U.S. dedicated to the performing arts. The outdoor amphitheatre, Filene Center, holds over 7,000 patrons; half sit in reserved seats in a covered area, while the rest bring picnics and enjoy the show from a hill just behind the theatre. The sightlines are perfect and the sound is exquisite. I enjoyed a terrific concert by Canadian Alanis Morissette, but whatever kind of music you like – pop or classical, jazz or opera – you’ll find it here. If you’re a music lover visiting Washington D.C. or northern Virginia, Wolf Trap is a must-visit destination. 1645 Trap Road, Vienna VA.

George Washington’s Mount Vernon: In Fairfax County, creativity reaches way back in history. There’s evidence of George Washington’s brilliance at his home, Mount Vernon. He designed all the gardens, including kitchen gardens to be harvested and pleasure gardens to be enjoyed. And after retiring from politics, he developed one of the most advanced gristmills of the time, and the country’s largest distillery. Note for fans of Hamilton the musical: look for the framed key to Paris’s Bastille prison, given to Washington by Marquis de Lafayette. 3200 Mount Vernon Memorial Highway, Mount Vernon VA.

Sheraton Tysons Hotel: Tysons is hands-down the best hotel for visiting Wolf Trap: I drove to the performing arts centre in ten minutes, in traffic. Sheraton Tysons’ staff is friendly and the rooms are comfortable. 8661 Leesburg Pike, Tysons VA.