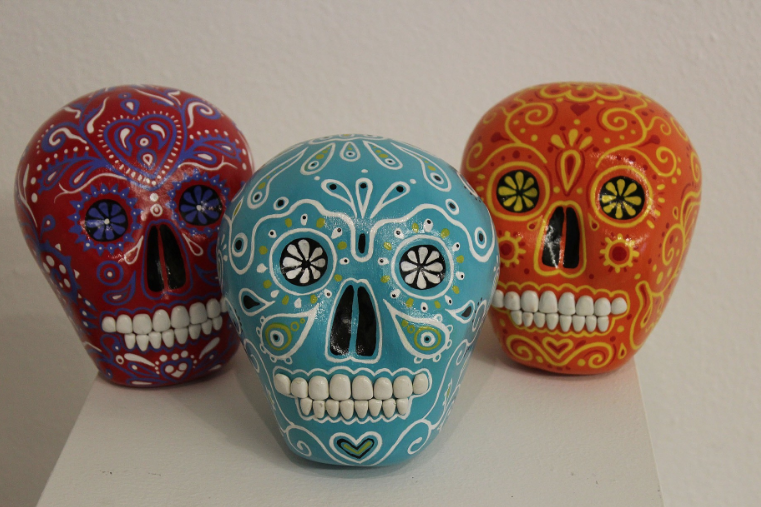 The menus at SMOKE: Texas BBQ in Harlingen are written on long rolls of butcher paper, hung on the wall behind the counter. Customers can choose from Dino Ribs, pulled pork and a variety of meats, all priced by the pound. They can also order a variety of sandwiches and side dishes.

But when we walked in the front door, we saw a sign that read, “So sorry! Sold out: No dino ribs, no pulled pork, no pork ribs, no chicken, no charro beans, no turkey, no sausage.” This is one popular restaurant.

Fortunately, I was eating dinner with Cassandra Consiglio, director at the Harlingen Convention and Visitors’ Bureau, and her husband Nick, who’s on the board of directors at Keep Harlingen Beautiful. They had the foresight to place our order in advance, so we’d have something to eat. And eat we did.

We ate brisket and pork ribs, charro beans, potato salad, mac ‘n’ cheese and bread. We got enough food to last three people about a week. The beef brisket was incredibly tender, as smooth as a Texas drawl on a moonlit evening. The charro beans, warm and hearty and packed with southern spice, could have made a meal on their own.

Harlingen is tucked into the southeast corner of Texas, just a half hour’s drive from the Mexican border. It’s bilingual and bicultural, with a population that’s majority Hispanic. (When I was in town, the marquee on the Rialto Reception Hall announced a quinceañera – a celebration of a girl’s fifteenth birthday.)

I’m all for visiting Harlingen for the great food! But don’t overlook the unexpected richness of the arts community that unites the best of two countries.

“Harlingen is like its own universe,” Jessica Salazar McBride told me. “It’s a unique combination of USA and Mexico that I’ve never seen anywhere else.”

McBride is director of Harlingen’s Beyond Arts Gallery, which features artwork by local artists. When I visited, the work of Jesus de la Rosa was on display. His background is evocative of so many others in the area: his parents lived in Texas but worked in Mexico, and he grew up with a close connection to both countries. And McBride loves to display artists like him at the gallery. “South Texas is rich in artistic talent, but didn’t always have the strongest representation for artists. The Beyond Arts Gallery was founded to provide a space to offer a positive experience to artists and to the community.”

I fell in love with McBride’s own art, particularly her sugar skulls. They’re full of colour, and intricate design, and – dare I say? – a sense of fun. “I love to put something positive in my artwork,” she says. “There’s so much negative out there, I hope my positive makes a difference in the world.”

I asked what the skulls meant to her. She said she didn’t celebrate Day of the Dead as a child, but she has gravitated toward it as an adult.

“Dia de Los Muertos is a celebration of life and a reminder that death is what binds us all together,” she answered. “Being of Mexican heritage, I’ve always been fascinated by the holiday and all it represents. The day isn’t just about remembrance, but of a spirit of healing that helps us feel the love that remains. We know our loved ones still dwell not just in the afterlife but in our hearts too. My sugar skulls are my way of blending the traditional and contemporary to pay respect to the holiday.”

McBride’s sense of generosity and humility adorns both her art and our conversation. This is the kind of woman, and gallery, that you want to support.

Harlingen may be best known as home to a brilliant set of murals. Mural maps are available to print off the Harlingen website, but I had a personal walking tour from Ed Meza, manager of Downtown Harlingen and art enthusiast.

“The real highlight of the collection is ‘The History of Mexico and Mankind’,” said Meza. Created by Mexican artist Raul Esparza Sanchez, the mural was originally housed at Los Angeles’s California Museum of Science and Industry. When that museum closed, Harlingen successfully bid for it.  “We acquired the mural a year before Sanchez died,” Meza added, “and he was thrilled that its new home was just across the Mexican border.”

Made of 905 handcrafted ceramic tiles over ten screens, the mural is a stunner. One screen depicts the Siege of Tenochtitlan in Mexico City, in vibrant yellows and blues. The Aztec warriors are depicted as attempting to defend the city against the Spanish and the Tlaxcaltecan Indians. Another screen represents the five-ton tomb cover at Temple of Inscriptions in Chiapas, Mexico.

As striking as ‘The History of Mexico and Mankind’ is, it’s just one of the eighteen murals in town. ‘Tropical Rio Grande Valley,’ across the street from the Beyond Arts Gallery, displays the same cross-border affection that the work in the gallery does. Local artists Benjamin P. Varela and Celeste De Luna created a mural showing unique aspects of the border region. An accordionist represents south Texan conjunto music; the king ranch rattlesnake represents ranch labourers. Characters are shown crossing into Texas, and the plants and animals depict the natural beauty of the Rio Grande Valley.

Other murals you’ll want to see: “Historic Route 77,” which pays homage to the road trip; and “A Tribute to Bill Haley and His Comets,” featuring the musician who spent his last years in Harlingen.

For more information on Texas and to receive a free copy of the Texas Travel Guide and Texas Official Travel Map, visit TravelTexas.com

Notes: The writer saw Harlingen as a guest of Texas Tourism, who did not review or approve this story.

Carlito’s Wine House: With live music on weekends, a simple menu and a nice selection of wines and beers, Carlito’s is that neighbourhood wine bar you can always depend on. 204 W Jackson Ave

Colletti’s: Colletti’s is housed in the Reese building, which opened in 1925 as a hotel. The restaurant is the first stage in a complete makeover of the building. If you love fried calamari – and who doesn’t? – you won’t do better than theirs. 202 1st Street.

Beyond Arts Gallery – 114 North A. Street