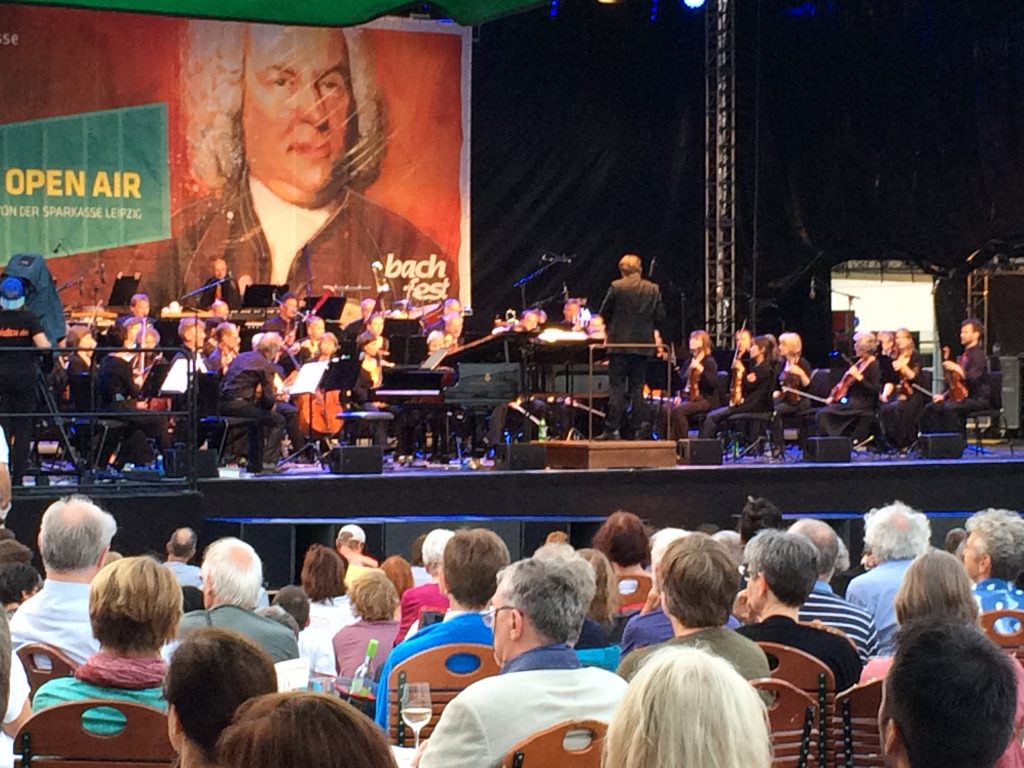 If there was a soundtrack for my life, it could have been written by Johann Sebastian Bach.

I took piano lessons for years, taking exams up to Grade IX, and most of those years involved a “List A” piece written by Bach. A decade later, as my husband practiced for his piano associateship (ARCT), I heard him play selections from Bach’s Well-Tempered Clavier nearly every day. And one of my favourite all-time recordings is the 1981 Glenn Gould performance of the Goldberg Variations. (I realize those are fighting words for fans of the 1955 version. Sorry, but you’re wrong.)

For music lovers – and especially for fans of J.S Bach – Leipzig, Germany is a glorious place to connect with music history. Bach spent twenty-seven years working as the city’s Director of Choir and Music. Felix Mendelssohn moved here to direct the Gewandhaus Orchestra; composer Robert Schumann and his wife, concert pianist Clara Wieck Schumann, lived in Leipzig for many years. Richard Wagner was born and studied there. Edvard Grieg wrote his first compositions in Leipzig, and was inspired by Brahms and Tchaikovsky while visiting.

If you love classical music, the best time to visit Leipzig is during the annual Bach Festival. Some of the 160 performances at the 2018 festival were held in Thomaskirche – where Bach performed weekly – while others were at Leipzig’s grand concert hall. And still others were held in Leipzig’s Market Square, free of charge.

Whether or not you visit during Bachfest, you’ll want to explore Leipzig’s musical heritage. And there’s no better way to do that than to follow the city’s Music Trail. Twenty-three stops are identified with steel markers in the sidewalk, and each has a signpost describing its importance.

Here are some of the stops you’ll see along the Music Trail.

Although Bach was responsible for the music performed in all the venues in Leipzig, Thomaskirche (Thomas Church) was his main working place. The St. Thomas boys’ choir, which Bach led during his Leipzig tenure, still holds regular performances at the church. Although I didn’t attend a concert there, I was one of dozens in the church listening to the organist practice. (I closed my eyes, and imagined I was listening to an original Bach composition in the 1730s. Goose bumps….) Although the organs aren’t the ones Bach used, the sound of the main organ was built to sound like the original instrument.

Mozart also performed at Thomaskirche in 1789, and Wagner was baptized there in 1813.

The old St. Thomas’s school, where Bach and his family lived, was torn down in 1902. So when the city was looking to build a museum to honour him, they settled on the Bose House. The Boses were wealthy merchants who were close friends with the Bach family.

The museum is mostly about Bach and his times. One of the standouts is the Treasure Room, which displays music scores and manuscripts written in Bach’s hand. These precious documents are rotated frequently to protect damage from air and humidity.

The Orchestra Room displays baroque musical instruments played during his time, and an interactive element lets you hear the sound made by each. The collection also includes an organ from the former St John’s church that was inspected and played by Bach in 1743. A recent addition is an iron chest that’s certified to have been in the Bach household; this is the only personal belonging that has survived.

Spend some time in the listening studio, where you can choose from every composition Bach ever wrote.

The magnificent Gewandhaus concert hall is home to the Leipzig Gewandhaus Orchestra, so named because the original group met in a garment house. The orchestra celebrated its 275th anniversary in 2018, while the concert hall was built in 1981.

Once derided as “the house with a hat,” the concert hall is now a much-loved part of the city. On your way in, look for the striking mural “Gesang vom Leben” (Song of Life) that extends over the ceiling in the foyer, depicting life and music in Leipzig. And depending on what performance you’re seeing, you’ll be in either the Great Hall (which seats 1900 customers), or the smaller Mendelssohn Hall (with 500 seats).

At 190 members, the Gewandhaus orchestra is large; it is responsible not only for its own concerts, but also for accompanying the opera and the St. Thomas Boys Choir. At various times, the orchestra has been conducted by Berlioz, Brahms and Wagner, and has premiered Beethoven’s 5th Piano Concerto (Emperor), Schubert’s 9th Symphony, and Mendelssohn’s Violin Concerto in E Minor.

Felix Mendelssohn is one of the best-loved musicians with a connection to Leipzig, having moved there in 1835 to direct the Gewandhaus Orchestra. A fan of Bach and Schubert, he did everything he could to popularize them again. He also founded the Leipzig Conservatory, a well-regarded university for studying music.

The Mendelssohn House was one of my favourite stops on the music trail. It was his last home in Leipzig, and has been restored with as much of the original furniture and belongings as possible. In the study, the piano is from the approximate time period, while both desks and the chair were Mendelssohn’s personal property. One of the rooms is dedicated to his craft as a painter, with scenes from his journeys to Switzerland, Italy and beyond.

In the Effektorium room, I stood at the conductor’s podium and conducted a virtual orchestra in an excerpt from A Midsummer Night’s Dream. If you’re a fan of music, it is a dream – and if you close your eyes, you can pretend you’re conducting actual instruments rather than pillars with the instruments’ names on them.

Other stops of note along the Music Trail include the GRASSI Museum of Musical Instruments, the Opera House, and the Bach monument.

The 2020 Bachfest will be held June 11 – 21, 2020.  With 2019 being the 200th anniversary of the birth of pianist and composer Clara Schumann, there’s a tribute to her, too. Top performances sell out quickly, so buy your tickets soon, or plan your trip around the outdoor performances that are open to everyone.

*Brahms and Tchaikovsky were not inspired by each other. Tchaikovsky, in particular, disliked the music of this “giftless bastard,” promising if they ever met, he’d say, “I consider you to be a very untalented person, full of pretensions but utterly devoid of creative inspiration.” However, when they met in Leipzig in 1888, they kept the hostilities to a minimum.

Notes: The author visited Leipzig as a guest of Leipzig Tourism and Marketing, who did not review or approve this story.

The Leipzig Marriott Hotel – If your accommodations are in the Old Town of Leipzig, you can walk to nearly everything. I stayed at the Marriott, just a short walk from the train station and close to museums, restaurants and churches. If you stay on the Executive floor, you’ll receive complimentary breakfast and afternoon tea, as well as access to the business lounge.

Restaurant Weinstock Leipzig – Weinstock is a great choice any time, but particularly brilliant during Bachfest. I ate on the patio next to Market Square (Markt) during an open air concert, and was rewarded with a live performance of the Brandenburg Concerto. The menu at Weinstock is seasonal; I especially enjoyed the tender-crisp asparagus with salty parma ham. At my server’s suggestion, I tried a glass of the Grauburgunder (similar to pinot gris), which complemented my dinner wonderfully.

Zum Arabischen Coffe Baum – Enjoying apple strudel en route to a Bachfest concert feels like the consummate German activity. One of the oldest coffee shops in Europe, the restaurant features a plaque over a table where Robert Schumann and friends met regularly. If I’d had more time, I would have checked out the cafes on the second floor and the coffee museum on the third.