The Small Towns of Croatia - CARP
Join Donate Sign In 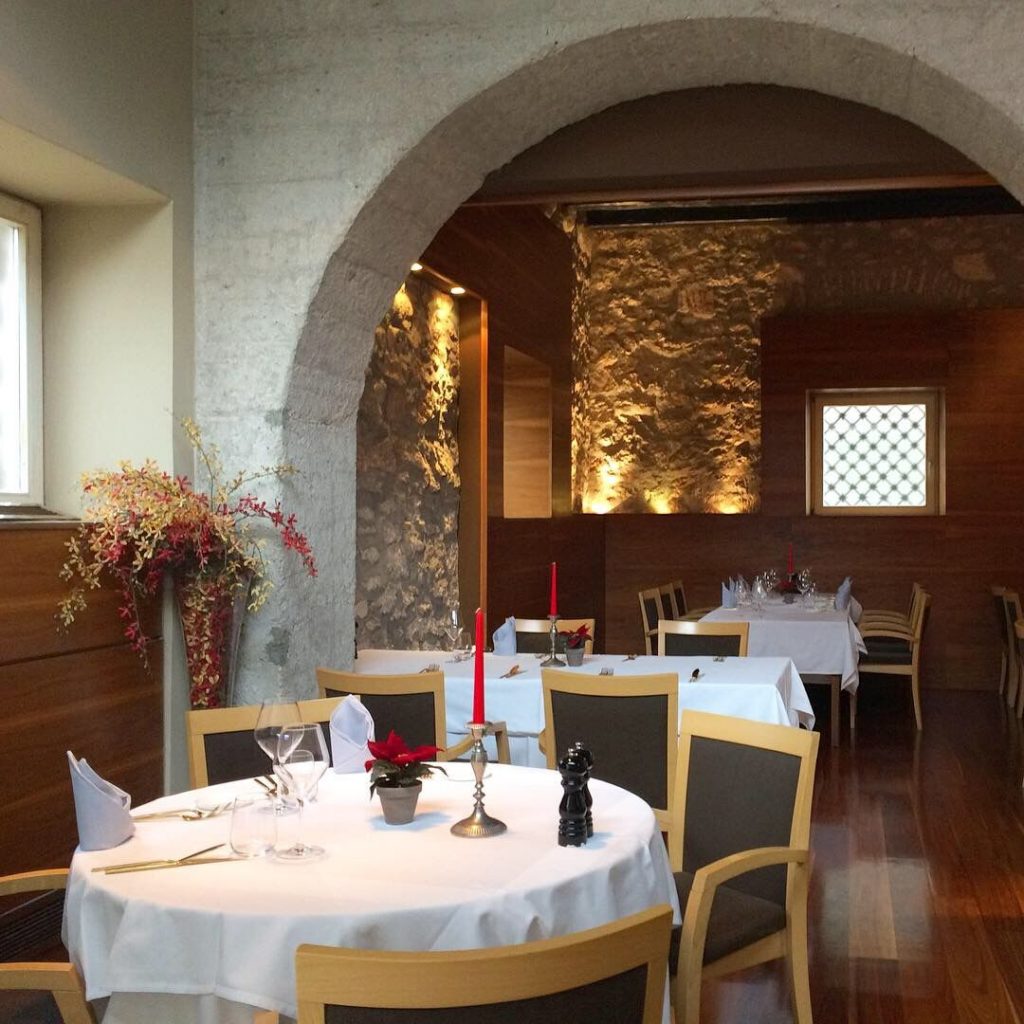 You might think you know the highlights of Croatia – Instagram superstar Dubrovnik, the beautiful islands, the pretty capital of Zagreb, and historical Split. But there’s so much more to see, and there’s no better place to start than this country’s small towns. Whether you’re looking for local artisans, unique artwork or compelling museums, you’ll discover the heart of Croatia by visiting its one-of-a-kind small towns.

Samobor, just a half hour outside of Zagreb, is a small town that punches above its weight in artisan creations.

Licitar is a gingerbread craft that’s created in Northern Croatia. One of the best producers is Samobor’s Arko, named after founder Ivan Arko, who received his Master’s degree in licitar in 1940. He began handcrafting the beautiful red hearts that symbolize this craft, and over the years added many new designs. The family business is now run by his granddaughter, Brigiti Mihini.

Arko has received awards and grants from the cities of Zagreb and Samobor, and Mihini says she appreciates them all. “It’s hard to survive, and to keep your tradition,” she says. “The awards help us be recognized, and tells customers who we are. And the grants help us maintain our booths to sell products in Samobor and Zagreb.”

Their Samobor booth is open on weekends, from Easter until All Saints’ Day. “Traditionally, we sell a lot at the Sunday fairs,” she says. “We make the cookies – up to 100 kg of them – on Fridays, and decorate them on Saturdays.” They make two kinds of cookies: those that are meant to be eaten, and – most popular at Christmas – those that are used as decorations. For the latter, they thread the cookies before hanging them from nails just below the ceiling to let them dry. (They need to be crisp before they’re decorated to ensure the icing spreads evenly.) The cookies are painted and decorated by hand.

Mihini admits that the job is hard work. “It’s long hours,” she said. “You have to love it, and be willing to live the lifestyle.”

Kristal Tuk is another well-known family business in Samobor. This crystal manufacturer and vendor had 1000 employees when Croatia was part of Yugoslavia. Now they’re down to seven employees. Everything is still handmade; I watched the etcher and polisher perform their crafts in the workroom, after which I happily shopped in the adjacent store. Both traditional and modern patterns are available in a selection of vases, glasses, jugs, bowls and candy dishes.

The town of Samobor is situated on the Gradna River. Give yourself some time to walk through town, where you can admire its Vienna Secession style architecture, wooden bridges, ancient schoolhouse, and pretty streets.

Zadar was originally home to an Illyrian settlement and through the years has been under Greek, Roman, Venetian, Austrian, French and Slavic control. Naturally, the city’s architecture reflects that varied history, with a Roman forum, churches from the 9th, 12th and 18th centuries, and a 16th-century palace. A lion with wings, the traditional symbol of city-state Venice, is carved over the city gate.

But the highlight of Zadar isn’t its history: it’s the bold new art installations that set it apart.

Zadar’s “Sea Organ” is a piece of artwork for your ears. Built on the waterfront, it is made up of 70 metres of pipes, with pipes of different lengths buried in a series of holes across the waterfront. Each pipe produces five different musical tones, depending on the wind and the waves, and because the pipes work together, the resulting composition is always original. Stronger waves mean more sound, so it’s worth waiting for a ship to come by and create a wake. Try to visit at a time when fewer visitors are present; the “Sea Organ” is particularly evocative when you hear the haunting music with no other distracting sounds.

Zadar’s “Greeting to the Sun” is equally compelling. This 22-metre piece of art includes 300 solar panels that absorb the sun’s rays during the day. In the evening, it reflects those rays in an installation that evokes the solar system. Accompanied by the music from the adjacent “Sea Organ,” it presents a soulful accompaniment to an evening walk along the Zadar waterfront.

Want to visit Sinj at the most exciting time of year? Come from early to mid-August, when the town hosts two events honouring its great history.

In 1715, a group of 700 townspeople defended the town successfully against tens of thousands of Ottoman warriors. Every year since then, Sinj has hosted a competition on the first weekend of August that pays tribute to those brave townspeople. This performance, the Sinjska Alka, invites horsemen to ride at top speed while thrusting their spear into the centre of a small iron circle. They do this while wearing heavy traditional wool costumes. The winner receives a silver shield, a trophy that has been awarded every year since 1959.

According to legend, the townspeople won because of the intervention of the Madonna. A beautiful woman dressed in white was seen walking the town walls in 1715 just before the victory. Every year, the “Miracle Madonna of Sinj” is honoured with a procession on August 15. 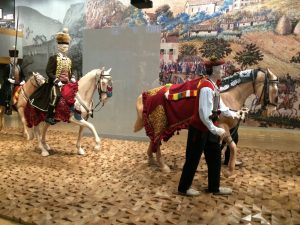 But Sinj is well worth visiting, even if you can’t be there in August, for its two museums.

The Sinjska Alka Museum won the EU Cultural Heritage Europa Nostra Award in 2018, and was runner-up for the 2017 Museum of the Year award. This cutting-edge museum features information on the Sinjska Alka performance. Lifelike mannequins show the traditional black, red and white costumes worn by participants and their horses. Exhibits include previous winners’ vests, the Silver Shield Trophy, and a 18th-century Turkish saddle blanket.

Although it hasn’t won the accolades of the Sinjska Alka Museum, the Museum of the Cetinska Krejina Region is special as well. It includes a collection of artifacts from an archaeological dig at Aequum, a town six kilometres outside of Sinj. Displays include a marble carving of the head of the wife of a Roman emperor; fragments coming from early graves in the area; and half of a statue of an emperor that is believed to be Claudius. The wealth of prehistoric and Roman artifacts make this archaeological collection a must-see if you’re in town to learn more about the Sinjska Alka.

Notes: The author was a guest of the Croatian National Tourist Board, who did not review or approve this story.

Hotel Bastion: The property, part of the Relais et Chateaux group, offers a luxurious stay in a centrally located hotel. The rooms are all lovely, but consider springing for the luxury suite, which gets a floor of its own. Beautifully laid-out with ample space for relaxing, reading or working, and a floor-to-ceiling bedroom window that lets in light with a view, it’s a wonderful space to relax in after a day sightseeing in Zadar. Ul Bedemi zadarskih pobuna 13, Zadar.

Kod Luke: This family-owned restaurant prepares and serves homemade and locally prepared food. Kod Luke’s homemade prosciutto was salty and tender, almost addictive, and was served with light fried bread and a young, mild cheese. The second course included seven plates of food that we shared family-style, most notably arambaši, a warm, spicy dish, similar to a cabbage roll, which is protected by UNESCO Intangible Heritage status. Dessert was Croatian crepes in four flavours – my favourite was the apricot, but the ones with a gentle paste of Nutella and walnut were pretty great, too. Radošić 115b, Sinj.

Restaurant Foša: Foša is known as being the best seafood restaurant in Zadar, and it lived up to its reputation. Their bakalar, flaky codfish with soft garlic potatoes, was a brilliant take on this traditional Croatian dish. White truffles took the pasta and cuttlefish to an elegant level, and the chocolate mousse with thin layers of cherry gelatin was the gustatory equivalent of wrapping yourself in a cable-knit blanket. If I didn’t moan out loud while I was eating, I certainly came close. Kralja Dmitra Zvonimira 2, Zadar.

Samoborska Klet: A “klet” is a wooden shack or cellar where visitors eat and drink. I enjoyed a delicious (and enormous) lunch of venison stew with homemade gnocchi. Be sure to try local favourite Crème Schnitte (cream slice) for dessert. Trg kralja Tomislava 7, Samobor.